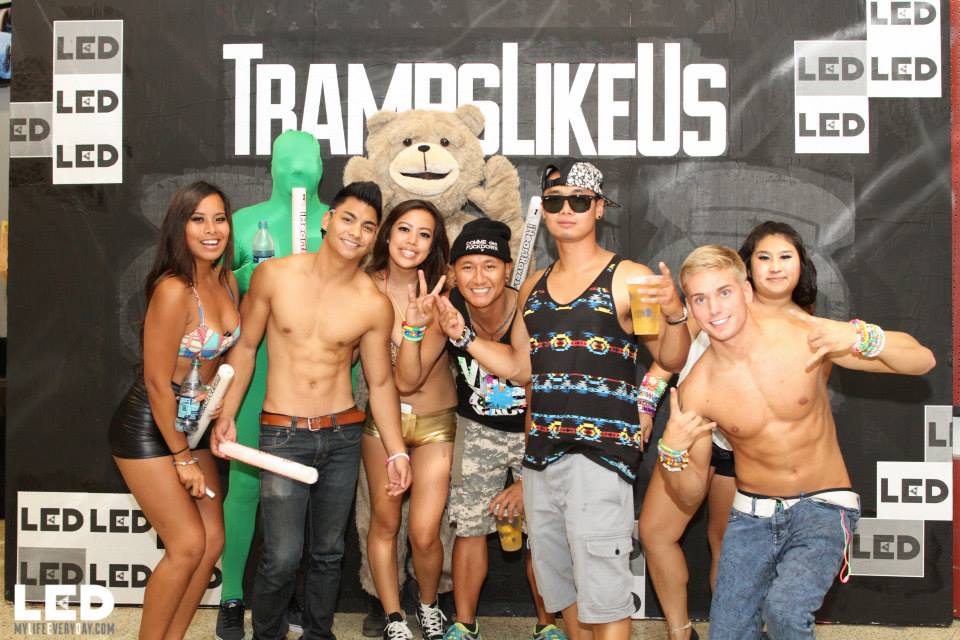 5 Reasons Why LED’s Tramps Like Us Will Kick Ass

As the summer season unofficially comes to an end, its been quite the journey witnessing the LED team expand far and wide with a variety of stellar events. What better way to close off the summer than with a return of one of the biggest Labor Day weekend celebrations San Diego has to offer: Tramps Like Us. After taking us on a journey of tranquilizing beats, stunning LED visual effects last year, expect an even greater larger-than-life event from LED this time around.

Switching it up and introducing some new talent surprises this year, the Tramps Like Us soundtrack ranges from trap, electro, and even hardstyle. Returning to the San Diego Sports Arena (formally the Valley View Casino Center), LED always finds ways to make their event-goers get their moneys worth event after event.

Here are just some reasons LED (My Life Every Day) has taken San Diego events to a different level and just some of what to expect at this years Tramps Like Us:

It is no surprise that over the past couple years the LED brand has expanded their production value and taken it far beyond ever imagined. Event after event, the LED panels have transitioned into full on wall structures, lasers have turned into force field ceilings, and copious amounts of CO2 will renew life into a crowd lost in the music. LED never fails to provide a stunning visual performance that fits for the San Diego scene.

Over the past year LED has branched out to other locations across the West Coast. From the Bay area to the Shrine Expo Hall in Downtown Los Angeles, all these venues each hold their unique presence. The San Diego Sports Area however, feels just right as the dominant home for LED events. Formerly the Valley View Casino Center, the stadium hosts a central stage while revelers can enjoy the central dance space or the bleachers surrounding the stage. Sections are numbered around the  dance floor, making it easier to locate or meet up with your group/friend.

Most of the events held at the San Diego Sports Arena go until 4am, and the traffic congestion that occurs right when an event ends is minimal to none.  Alongside an ideal location, there are more than one exit route, which make getting in and out of the sports arena area seem less of a hassle.

San Diego can easily be considered one of our personal favorite cities that we’ve explored. Every single LED event that we’ve attended its safe to say we’ve felt nothing short of a community. The event goers are a unique bunch that make every festival more special than the last. We often encounter people offering us some water, a kandi trade, or just having a shuffle/dance off. The positivity that flows within the crowd vibing off everyone is one that is said to be embedded in the LED event culture. The amount of creativity that goes into the oufits and evening all together, are what truly make the crowd that gathers in San Diego one that can’t be forgotten.

It really is not a festival/event without the musical talent that LED books for their events. This year we have a variety of sounds coming together to unofficially wrap up the summer season. Just a few mentioned from the impressive lineup are acts like Headhunterz who will enthrall us with his hardstyle melodies that have captured the attention of many all over the world. Sander Van Doorn and W&W join the lineup boosting some of their well-known electro and progressive beats that have been supported from DJs all over. Not only have Pegboard Nerds formed a name for themselves with their trap and dub-infused sound over the years; they have proven that regardless the sound, it’s all about the energy you can bring to the decks and that’s just why they can’t be missed. Blasterjaxx makes their return once again to San Diego with their big room sound that can be heard in their latest release “Gravity.”

Whether you’re just trying to find something to close off your summer or just trying to catch a glimpse of your favorite DJ, this year’s LED presents Tramps Like Us is one not to miss. We’ll see you there!