When I think about my entire experience at EDC Las Vegas as a whole I can’t help but smile and be grateful for all of the things I learned from after my first EDC in Las Vegas. Here are a few things that made my experience special, but also made me learn a lot about myself and the world: 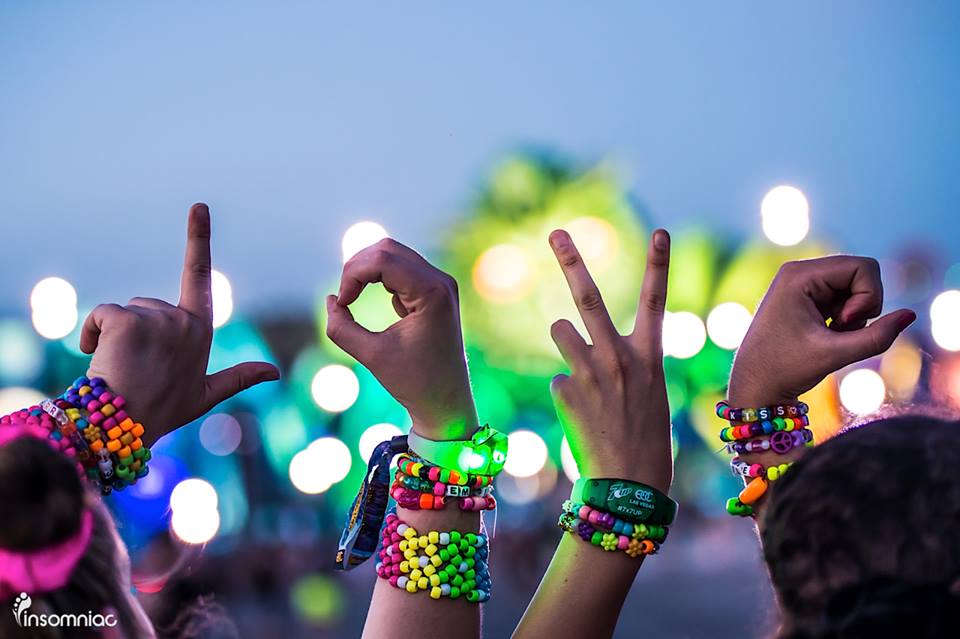 1. Never Judge a Book by Its Cover.

We’ve all heard this one before. But it stands true more than ever at EDC. You NEVER know where someone came from, who they are, or where they’re going until they open their mouth and tell you themselves. Sure, people are dressed in vastly different ways, but that doesn’t necessarily define who they are. I met so many beautiful souls over the weekend, many of whom I probably never would have interacted with walking down the street. Sometimes, we’re too busy to take in our surroundings and interact with people for no reason other than it makes us better and stronger as individuals.

Flashback to Friday night of EDC around midnight. I was still by myself, having lost all of my friends, and I was stressing out about it. Meet Benn. Benn was standing next to me at cosmicMEADOW jamming out to Flume. I’m not sure whether he saw my eyes glancing at his camelback or if it was something else, but we quickly met and shared water. Though we barely talked and spent most of our interaction either dancing or hydrating, we shared a 20-minute silent bond. He had to go meet his friends before the next set, but not before giving me a hug and going on his way.

Now, let’s jump back to Sunday around 11. I was reunited with my friends, and we were all dancing around to Afrojack at the kineticFIELD. I looked in front of me, and under a wolf SpiritHood was Benn – by himself. I immediately tapped him and he jumped up and grabbed me, spinning me around in his arms. Turns out he had lost his friends, and was in desperate need of some water. The tables had turned, and I let him finish most of what I had left in my bottle. This time, we actually stopped dancing to talk for a few minutes. Turns out he was from the East Coast as well! And we exchanged numbers, and will hopefully meet up at a festival again before the summers over.

Before Benn left, he said, “Hey, think about this. Out of all these thousands of people, we managed to run into each other again. How crazy is that?” It stuck with me all through the rest of my trip, and into my normal day life.

3. Remember to Stop, Take a Minute, and Thank Those Around You.

And when I say those around you, I’m specifically referring to all of the workers and staff who helped make EDC Las Vegas happen. We weren’t the only ones out in the heat – they were too! And on top of it, they may not have chosen to be there. They might have had to take the shift to make ends meet, or to pay for next month’s rent. I can’t help but smile when I think about how friendly every staff member was, especially those working security and near the entrances. These people often have to deal with the most impatient ravers, as everyone is DYING to get into the venue. I know personally, it was hard to keep calm when I was minutes away from walking through the gates. But everyone on staff handled the crowds profoundly well, and my only wish is that I had stopped to trade Kandi or thank them a couple of extra times.

4. Music is One of the Most Powerful Entities in this World.

I’m sure most of you knew this already. I think 90% of the population (maybe mostly female) have cried listening to a sad song or one associated with a certain memory. But when I was standing at the kineticFIELD, and Steve Angello transitioned into Payback, I broke down. For some reason, that song has always been so beautiful to me, even though it has no words. I had never heard it live before, and completely broke down. The best part was, that all the strangers around me saw me and put their arms around me. It was one of the most beautiful moments of my life thus far, and just further demonstrated the power of music.

I’d like to think I know how to shuffle. That is, I can do a couple of basic moves and get by. But seeing the professionals that scattered the crowd at EDC had me intimidated at first. As the lights dimmed and everyone started to feel more at home, my group and I just let loose. We weren’t worried about our dance moves, and let the music take control of us. No one was judging us, or telling us that we looked stupid. We were being goofy and enjoying our time under the electric sky, and it was an aspect of the weekend that I hope to carry over into daily life.

This sentiment might be hard to realize, as people are still struggling with post-EDC withdrawals, but it’s true. Just stop and think about it. EDC surpassed my wildest dreams and expectations. I never imagined in my life that I would attend anything like that, meet the people I did, and make the memories that still flutter in my brain while I’m sitting in my desk at work. If I could’ve never imagined this, IMAGINE what is in store both for myself and for all of you out there. We have no idea what magical moments in time are ahead of us, and that’s part of the beauty of this world. If everything were to be planned out and predictable, festivals and shows wouldn’t be nearly as fun. The spontaneity of life, especially during festivals, is a large component of what makes them so enchanting. So, while you might have a little hump of depression left to hurdle over, just think about EDC Las Vegas 2016, or even Tomorrowland, TomorrowWorld, or Ultra 2016, and it should put a smile on your face.

7. Don’t Cry Because It’s Over – Smile Because It Happened

Ah, Dr. Seuss. This one’s a little repetitive from above, but I figured it had to be in here somewhere. Coming from someone who was severely depressed Monday, Tuesday, Wednesday, Thursday, Friday…oh wait, I still am – recovering from EDC is tough. But my boss said it best my quoting Dr. Seuss. We shouldn’t waste time being sad that it ended. We should relive it – in pictures, videos, articles, memories, songs, and conversations – and think about the joy it brought us in those moments. Uniting under the electric sky was a dream come true, and bumming about it is only going to taint the memories and make it harder to reimagine the good times. So take some time to yourself, or with your rave fam, and recap the minutes or seconds that made your heart smile.

Apple Music: Why It's Perfect For Dance Music Fans