Dave Nardolilli (Dubloadz) is one of the most diverse producers within the bass music community. Dave is known for his various production abilities and sounds, most notably his ‘Savage Wonk’ and ‘Houseloadz’ aliases. Dubloadz is known for his continuous on-stage energy which is translated directly into his music. Dubloadz’s production abilities span all sorts of music genres including hip-hop, funk, hardcore, and metal. He has collaborated with some of bass music’s most versatile producers including Virtual Riot, Dion Timmer, and 40oz Cult’s Dack Janiels.

Dubloadz and Dack Janiels have collaborated together to produce multiple hit dubstep tracks including “Holy Shmo!” “Blue Bomber” and “Killer Instinct.” The two were also able to play a special 40oz Cult B2B set at EDC Las Vegas’s Wasted Art Car in 2018. Dubloadz’s relationship with Dack Janiels and the rest of the 40oz Cult team has been exemplified over the years through various collaborations and projects, now, Dubloadz has re-joined 40oz Cult and Dack Janiels for their Bassrush label takeover powered by EDM Maniac.

40oz Cult is primarily a bass-oriented label and features some of bass music’s most predominant rising stars as well as established artists within the industry. Yakz, Figure, Gawm, and Dubloadz are just a few of the artists who are featured on the Los Angeles-based label. We were able to sit down with Dubloadz before his 40oz Cult label takeover set with Dack Janiels on Insomniac TV to discuss his career, expression, current projects, and much more.

Make sure to tune into Dubloadz’s set Thursday, March 12 on Insomniac TV starting at 10 PM PST. 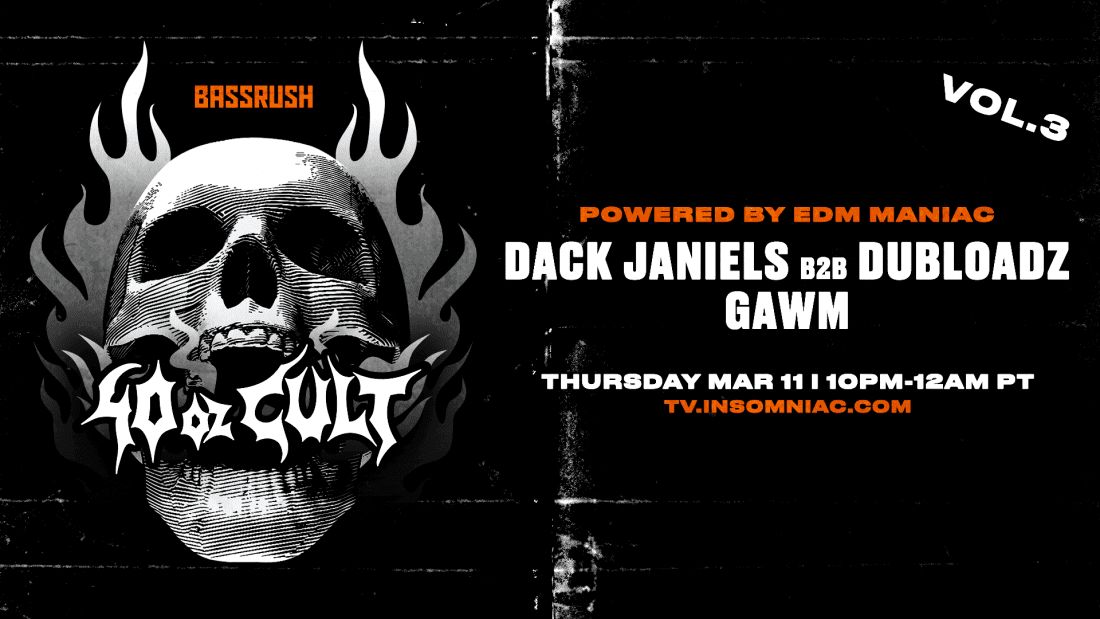 EDM Maniac: What’s been your experience as a professional DJ producer coming from New Jersey. How did you get to where you are now? Tell us the story.

Dubloadz: Honestly at this point, I’m not sure if any of it even happened or I just dreamed it all. But it was pretty fun. I’ve told this story so many times I’m kind of burned out on it to be honest haha. The answer to this question could be a full-length novel itself. Maybe one day I’ll publish that novel lol.

EDM Maniac: What has your musical progression been like since your first started making music to where you are now? How has your music progressed or changed throughout that time?

Dubloadz: It’s been a roller coaster of back and forth depending on the people I was surrounding myself with or the artists I was playing with, what I was going through in life, etc. You don’t realize how much whatever is right in front of your face every day is influencing you in both negative and positive ways. Anything from your social circle to what other artists are blowing up at the time, or even a love interest or heartbreak. I think my music progressed negatively over the past few years. I got really burnt out on dubstep, while simultaneously being frustrated that my ventures into other genres weren’t catching on. I probably didn’t push the fact that I wanted to be a musician and not just a dubstep artist hard enough. I don’t even know. I can see where I went wrong in a lot of places. Honestly, I don’t know how to even answer these questions without sounding like I hate what I do. I just take it day by day.

Dubloadz: I think a big part of my struggle with myself has been the realization, more recently than ever, that I have failed to express large parts of myself in my music. My fun and crazy weird side definitely show through my dubstep and art, but there isn’t much emotional depth for the most part. The music I’m writing now is far more expressive, and I’m working with vocalists for every song as well as having a hand in the lyric writing. Can’t really talk about that much though.

Dubloadz: Music/art are the only things that get me through life these days. It’s helped me personally as an escape. In fact, I don’t think I’d still be alive and walking this planet if I didn’t create every day. Professionally it helped me too until it didn’t. I’m grateful I was able to build a career of it, but now that all is said and done I acknowledge how much it f#$%ed me up. I suppose these days I just feel indifferent to it. I don’t want to be famous or rich. In fact, the idea of being either of those things in 2021 is horrifying to me. I just want to get by living in a small cabin somewhere pretty making music and art.

EDM Maniac: How excited are you for festivals and live events to start returning? What are you excited about? Are there any projects that you are excited to show your fans?

Dubloadz: Indifferent! Man, I feel like this is the most negative interview I’ve ever done but it’s just really hard, to be honest about my thoughts right now. Who knows when they’ll come back. Who knows if it’ll ever be the same. Even if they came back in a week and covid magically ceased to exist I’m not sure I’d even be playing them. I don’t think I’m ready to go back to that for a lot of reasons. I suppose it will depend on how comfortable I feel with my music when the time comes. I’m laughing at myself as I type this to a company responsible for some of the best bookings I’ve ever had. I just need to get to a place where I feel complete again musically before I start thinking about selling my soul to the industry again.

EDM Maniac: Speaking of projects… What projects are you currently working on? What can we expect from Dubloadz in 2021?

Dubloadz: I launched a clothing brand in January called Ghost Gang by Dubloadz (or just ghost gang). Was really floored by the response I got from that. Got another mini drop coming for that in a few weeks and it’s one of my favorite designs I’ve ever done. I’ve had a lot more time to do physical art, but I’m still working on music too. Actually, I’m underselling it. I bounce back and forth between several weeks of intense work on my album and then on my art. I’ve gotten quite good at having things ready to go a long time before they’re going to see the light of the day. It can be frustrating though. I want to show the world more of what I’m working on musically, but I know it’s not the right time. I just have to let the body of work speak for itself when the time comes. It’s a slow-burning progression as I learn more and the quality of the work improves over the past year. It feels rewarding in ways I haven’t felt in a long time. Writing for the sake of writing.

Dubloadz: Honestly I was off social media for a good half of last year. It really felt like I had failed my fans for not being there, but I knew what I had to do. I had self-released an EP and it happened to come out the day when the George Floyd story and all the protests blew up. On top of the horrors of what was going on in the world and my entire career collapsing I had people attacking me for not canceling the release of the EP (which was scheduled a month or so before… people don’t understand how anything works) and even going so far as to demand I show my money donations to various causes. People had (and still have) really forgotten that reality exists outside of these platforms and that we’re not obligated to share every single thing we do. I think around this time something really just snapped in my brain completely. Like no matter what I did I wasn’t going to be able to win against the world. I felt like my entire life was a joke and I couldn’t even bear to look at social media another day. What followed was some of the darkest months of my life, but I suppose there has to be darkness before light because once I reached my breaking point and realized truly if I didn’t take drastic action to change the way I saw the world, I would end up dead by the end of the year. So I guess to answer your question, I kept myself busy by hauling my entire life and daily schedule one thing at a time until I was able to rebuild my mental health. If you do that, the other good things start to follow. In fact, it wasn’t until late last year/early this year that I looked back on all the music I had started writing and thought to myself “wow, this is actually an album..” Everything you do in life seems worse when the root of the problem is your perception. I’m back on socials now anyway, but man it’s still really ugly out there. I try to keep it really limited. It shouldn’t be so hard to just enjoy living your dream.

EDM Maniac: What is one thing that you would like to accomplish both personally and professionally this year? How are you going to achieve that?

Dubloadz: Honestly I just want a dog, or a cat, or any pet at this point, but I’m between moving right now and not really sure where I’m headed. Everything else will get accomplished when the time is right. In the meantime, I’d just like to make sure I never fall back down the hole of negativity I was in. Need to continue being rigid in my routines and the way I analyze my thoughts.

EDM Maniac: Thank you for your time….. Is there anything else you want to say to your fans?

Dubloadz: Go outside and get some fresh air. Live in the present moment. Create something every day. Learn everything you can about the things that interest you. FEED YOUR BRAIN. And if you have to use Twitter, just use it to post Garfield gifs.

Make sure to tune into Dubloadz’s set Thursday, March 12 on Insomniac TV starting at 10 PM PST.

As Festivals Make Their Return, What Can You Expect?