Taylor Chung (Wenzday) was raised in the Bay Area and initially started her musical career as a trained vocalist before turning her artistic skill set to dance music. Like her brother (Dack Janiels), Taylor attended Icon Collective and committed herself to becoming a full-time DJ. Shortly thereafter, Taylor became recognized as one of the most sought-after female DJs in the city.  Taylor has produced tracks on labels Dim Mak, Circus Records, and Gold Digger. Her initial fame came after her hit release, “Heartbreak House” which generated a tremendous amount of support from the dance music community.

Taylor is an initial founder of 40oz Cult alongside her brother Dack Janiels and HAMi. She has performed at some of the biggest festivals around the country including EDC Las Vegas, Lost Lands,  and Nocturnal Wonderland. Additionally, she has been featured on some of music’s top blogs including Billboard, Your EDM, EDM.com and EDM Maniac. Wenzday has performed at multiple 40oz Cult takeover shows across the country in major cities including LA, San Diego, and Honolulu.

40oz Cult is primarily a bass-oriented label and features some of bass music’s most predominant rising stars as well as established artists within the industry. Yakz, Figure, Gawm, and Dubloadz are just a few of the artists who are featured on the Los Angeles-based label. We were able to sit down with Wenzday before her 40oz Cult label takeover set on Insomniac TV to discuss 40oz Cult, her career, and much more.

Make sure to tune into Wenzday’s set Thursday, February 25 on Insomniac TV starting at 10 PM  PST. 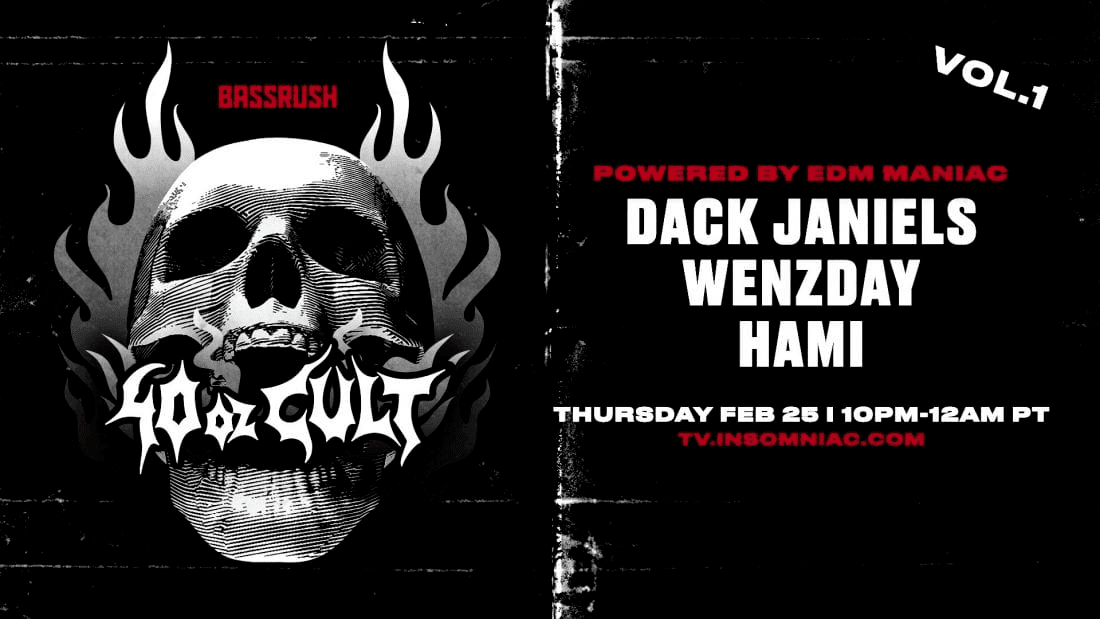 EDM Maniac: How did you first begin your musical career? You went to Icon Collective to pursue music, what was that experience like?

Wenzday: Very eye-opening. Oftentimes challenging for sure. It was interesting because I did theater growing up. I was a vocally trained, a classically-trained vocalist dyslexic, but yeah, so it was interesting going into a program that is designed that basically by the time you’re done, you have like your full repertoire, you have your artist project. So having a lot of direction there versus just like, here’s what this note is, and this is how melody works were fascinating and it was awesome.

EDM Maniac: Were there any relationships that you built there that are still in your life today?

Wenzday: A hundred percent. I think, you know, the class size is very small, so you get to know your peers really well. And also it’s awesome to see my peers doing it just as I am, just as my brother is. And so it’s super inspiring to have classmates who also enjoy art.

EDM Maniac: Do you learn a lot from meeting new people by going to school…? Would you do it again?

Wenzday: A hundred percent. I think there are two sides to that coin. I think you can definitely learn a lot with the resources out there for free. For me, I wanted a fast track to my end game. And so that’s essentially where we are coming from, with a school-like Icon and so, 10 out of 10 recommend an incredible experience, very nurturing, very safe environment, and yeah, I would do it all over again if I have to.

EDM Maniac: We love it. Now, being that you are both vocally trained and classically trained, do you sing on your own tracks?

Wenzday: I do. I do a lot of the vocal work, even if it’s just background, is all me. I’m sure you guys can hear my vocals in some of my latest tracks.

EDM Maniac: Do you think there will ever be a time that you will incorporate live singing into your shows as well?

Wenzday: I think that would be down the road. I would love it. I came from a band background and so I think eventually it’d be great to incorporate like a band experience or do live vocals, but for right now on one step at a time, it’s really just the introduction of like, here I am, here’s my voice, here is what I have to say, and then we’ll tend to take it to the next step.

EDM Maniac: A hundred percent. We think you will take it to that in time. You’re very ambitiously driven and you’re talented. With that being said, what’s been the most difficult and then potentially the most rewarding thing about your career?

Wenzday: I think the most difficult part of my career is all me. And so having to be your own biggest fan or your own biggest critic is often very hard. And I always tell people like, if you don’t believe in yourself then no one else will. But that oftentimes means when you’re in the trenches, being able to like, nope, this is right. I’m on the right track. And so yeah, I think that’s always difficult.

We’re our own biggest critic. When it happens, sometimes you don’t take that as well. So when things are happening and when songs do well, like I just had a release come out and it’s doing really well. And it’s just weird for me to think about that. So yeah, but I think that’s part of being an artist, right? That’s why we make music to connect with people.

EDM Maniac: Fantastic. Well, it’s been a crazy 2020, 2021. Your solo career and 40oz Cult is taking off and you are attracting a lot of attention from artists, fans, and all that. How does 2021 look for you guys?

Wenzday: I think for us it’s just continuing to build off of this foundation, I think it’s putting out music. Whether it’s my own music or the label’s music, just putting out solid releases and using the platform that I have at 40z Cult to further my own project as well.

EDM Maniac: God bless. You’re going to be hearing a lot about Wenzday if you haven’t already.

Make sure to tune into Wenzday’s set Thursday, February 25 on Insomniac TV starting at 10 PM  PST.