The holidays are in full swing at Avalon Hollywood. The mega-club has just revealed their lineup for the holidays, and it’s stacked with some of the biggest names in music.

Getting things started on the day after Christmas is the one and only Don Diablo. He will return to Avalon on Friday Dec. 26th alongside Third Party. Don Diablo has had an amazing year with tracks like “Starlight.” Both Don Diablo and Third Party are with Steve Angello’s Size Records. Try and catch their sets if you can!

On Saturday Dec. 27th, The Queen of Clubs, Nadia Ali will take over the decks for a performance like no other. You won’t want to miss this. You may know her from the hit song “Rapture.”

The fun continues on Sunday Dec. 28th when Fedde Le Grand returns to Avalon. He was their big NYE headliner last year and always puts on a sensational show. His blend of banging electro keeps us coming back for more.

This all leads up to New Year’s Eve when the rising duo Blasterjaxx take over Avalon to ring in 2015. You can expect a lot of confetti, lasers and an exciting countdown unlike any other! Tickets to all of these shows are on sale now on Flavorus.com.

Have a happy and safe NYE! 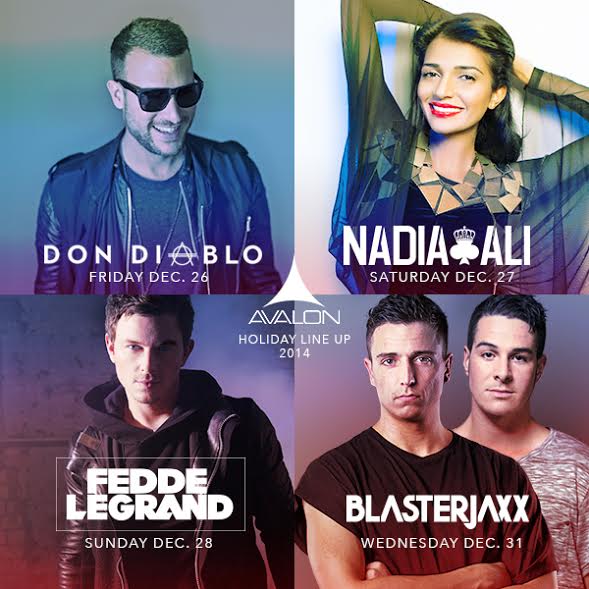