The headliners for the three-day festival are Halsey, Odesza and Migos, with special guests Kaskade and Khalid. Other artists performing at the festival include Jaden Smith, Chris Lake and Charlotte Lawrence.

This festival intersects hip-hop and electronic dance music and it debuted in Belknap Park in 2017.

“We are excited to bring Breakaway back to Grand Rapids for year 2. With the resounding success of its debut last year, we believe this year’s lineup is perfect for the western Michigan area and helps build upon the strong bill that built the foundation of this festival in 2017,” Managing Partner Zach Ruben said in a statement.

Tickets are on sale now at www.BreakawayMichigan.com. Tickets start at $55 and both single day and two-day passes are available. The event is all ages and outdoors rain or shine. 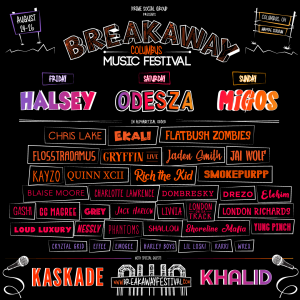 EDC Reminder: If You See Something, Say Something