The festival that started the worldwide electronic music phenomenon makes its U.S. debut at the birthplace of music festivals on Memorial Day Weekend 2014. 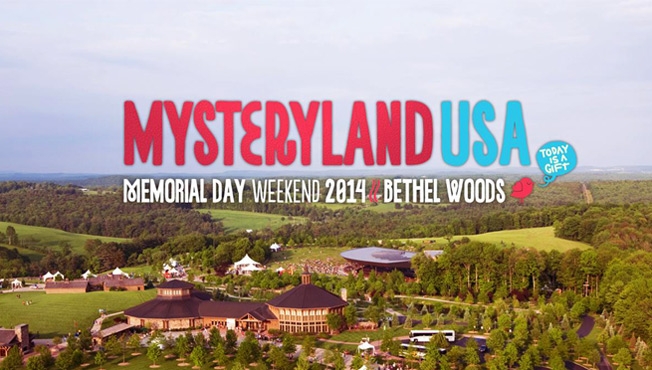 BETHEL WOODS, NY – December 05, 2013 – The world’s groundbreaking and longest-running electronic music festival, Mysteryland, today announced ticketing plans for its historic U.S. debut over the 2014 Memorial Day weekend from May 23 to May 26, 2014, at Bethel Woods, New York, the site of the legendary 1969 Woodstock festival.

The location of Mysteryland’s inaugural U.S. event is no coincidence. It is the first music festival to return to the hallowed grounds where Woodstock took place. “Mysteryland has had a tremendous impact on the music world and it is the logical festival to follow in the footsteps of the original ground-breaking music event, Woodstock,” said Robert F.X. Sillerman, Chairman and CEO of SFX Entertainment.

“This is more than just a music festival. This is a seminal event that marks the same kind of Revolution in society that Woodstock signified,” said Sillerman, whose SFX acquired ID&T, the producer of Mysterland, earlier this year. “Woodstock changed everything when it took place in 1969 – music, culture, the way we looked at the world. Mysteryland did the same 20 years ago, when it started what is now a tidal wave of electronic music festivals and Electronic Music Culture (EMC), which engages hundreds of millions of people across the planet. SFX is proud to have the honor of producing Mysteryland at the home of Woodstock.”

The festival marks an historic moment for ID&T, the producers of successful global festivals such as Sensation, Tomorrowland, TomorrowWorld and Q-dance.

“Woodstock represented the music of a new generation and cultural tour de force for the changing times, and today Mysteryland brings together the global forces of dance music for the millennial generation’s revolution,” said Duncan Stutterheim, a founder and current executive of ID&T.

Promoters from all over the world have been trying for decades to convince the owners of the Bethel    Woods site, Bethel Woods Center for the Arts, to host large-scale festivals in this special location. After    a year of talks, ID&T won approval for the first U.S. edition of Mysteryland, which is also held annually in    the Netherlands and Chile. The 20th edition of Mysteryland in the Netherlands took place in August 2013, selling out all 60,000 tickets.

The first US edition of Mysteryland at this iconic location will be an exclusive gathering. The multi-day festival will offer only 20,000 tickets per day with a variety of tickets, including single-day and weekend tickets ranging from $109 to premiere Mysteryland B’n’B VIP tents for $1,999. On-site camping will be available with limited capacity. Mysteryland will also offer a special ‘Nomadic Journey’ pass which will include travel to all three Mysterylands on three continents (North America, South America, and Europe). Mysteryland USA is a 21+ festival.

Mysteryland will also present its first musical partner, Sunday School, which will host a mini-fest. Originally created in 2006 at the Winter Music Conference, Made Event’s Sunday School is the definitive cutting edge techno and house music party and will continue to be so, with three dedicated stages and a cross-section of today’s and tomorrow’s future techno stars.

Mysteryland’s multi-faceted approach has been a winning formula for two decades. The festival offers its guests a creative journey, combining music with theatre, movies, interactive installation art, street performers and spectacular shows at bizarre decorated stages. To create this amazing spectacle, the festival organizers collaborate with a wide range of creative people from all over the world. As a nomad, Mysteryland travels across the globe to find like-minded international artists who enrich the festival experience.

The musical offerings are also about discovery. In addition to legends from the international dance scene, the festival provides a stage for new and local talents, the next generation.

ID&T is a pioneering electronic music experience company, known for events such as Sensation, Mysteryland, Tomorrowland and TomorrowWorld. ID&T was founded in 1992 with worldwide headquarters in Amsterdam, The Netherlands. It has offices in Belgium, Australia, Brazil and recently opened an office in the US. ID&T has organized events for over 20 years, focusing on international productions in the last 10 years and organizes events in over twenty countries worldwide. World renowned for delivering unrivaled levels of production and experience, it is perceived as a company in a class of its own. For more info, please go to www.id-t.com.

SFX Entertainment, Inc. is the largest global producer of live events and digital entertainment content focused primarily on electronic music culture (‘‘EMC’’). SFX’s mission is to enable EMC by providing fans with the best possible live experiences, music discovery and digital connectivity with our content and the broader EMC community. SFX was borne out of the technology revolution, as the music industry evolved into DJ- and producer-led creations driven by social and digital consumer media.  SFX produces and promotes a growing portfolio of live events that includes leading brands such as Tomorrowland, TomorrowWorld, Mysteryland, Sensation, Stereosonic, Electric Zoo, Disco Donnie Presents, Life in Color, Nature One, Mayday and Ruhr-in-Love.  SFX also operates Beatport, the principal online resource for EMC DJs and a trusted destination for the growing EMC community to discover and stream music, follow DJs and keep abreast of news, information and events, in addition to offering year-round entertainment to EMC fans around the globe through other digital assets.