BTSM Ceremony Tour is a Gripping Thrill through New Worlds

Black Tiger Sex Machine’s Ceremony Tour has been built up a lot over the past couple months; and it absolutely lived up to all the hype. Bringing along fellow Kannibalen Records artists Lektrique, Apashe and Kai Wachi; BTSM takes church to a whole different level on this tour.

I got to experience the ceremony myself last week in Detroit at the Majestic theater. Before the show, I came across this badass narrative posted by BTSM describing the storyline of their freshest album, New Worlds. It was cool to read this before attending the tour because I felt like the storyline of the sets lined up with the storyline of the album. Maybe I’m just over-imaginative, but seeing it that way made it just made my experience so much better.

So I thought I would do something a little different with this recap. By weaving in excerpts of the narrative with my personal account of the tour, I hope you guys can see what I saw when I went to the Ceremony Tour…

In 2034, the world is overpopulated. The US government attempts to disseminate a virus through tainted vaccines that kill off the weak. The injection plot is discovered as the infection grows beyond the government’s control.

The Ceremony began strong, eliminating the weak right from the beginning. Lektrique took hold of the table, disseminating his infectious, heavy bass-infused electro sound through the crowd. His stage production was, quite literally, electrifying. The visuals were characterized by his namesake and objects of his own personal interests; switching between electric shocks and skateboards. Lektrique’s signature innovative sound and energy set the tone for the rest of the night; hyping up the masses and propelling the crowd into chaos.

A German-born doctor living in the US, Dr. Kannibalen, develops an antidote for the virus in the form of a competing virus that stimulates the immune system, but news of this discovery reaches the ears of an anti-population militia that dispatches an elite team of assassins to eliminate Dr. Kannibalen.

One of those bass assassins came roaring in on a copter. Apashe began his set with strong,  pounding bass lines that I could feel stimulating my entire body. He played a dope mix of his own masterpieces and a couple classic tracks. His set provoked my fellow rail riders to continue to lose control while headbanging… I could actually feel the rail coming up off the group under my feet each time we pulled back. The sound began to get louder, the Majestic became more populated and the Ceremony continued on…

When the killers opened fire on Kannibalen’s house, his wife and daughter are hit, but the Dr. escapes. Fleeing deep into the wilderness to his hidden laboratory, he becomes consumed by rage, casting blame for his family’s death on all of humankind. He becomes obsessed with cleansing the planet and reengineers his cure into an even more potent virus that he spreads through the water system. Thus the Kannibalen Virus takes over.

The disease is extremely dangerous due to its effect on the human body and mind. Symptoms include malaise, headache, fever, violent movements, uncontrolled excitement, and periods of mania and lethargy, eventually leading to cannibalistic urges and behavior.

The infectious sound began to flow through the theater at a viral pace when Kai Wachi takes the stage. His ferocious synths and hard hitting bass rattled the very existence of its spectators. Not to mention the savage vibe he brought to the table. His visuals were exhilarating, getting me more amped as the set progressed. Kai Wachi dished out most of his more infamous tracks, a couple commonly played mixes and even dropped a couple new ones that the crowd went absolutely wild to.

I took a break toward the end of the set to grab some water and suddenly, overwhelming feelings of excitement came over me. I couldn’t contain myself from losing control to the music and going crazy. Wait, the virus spread through water systems… Had I become infected with the Kannibalen virus?!

Kai Wachi ended with a banger and then the theater abruptly went dark and silent. The silence was quickly broken by chants, “BTSM, BTSM, BTSM.”

In 2036, the world’s population has fallen by 50%; most governments are on the brink of failure, with society having retreated into heavily fortified cities. 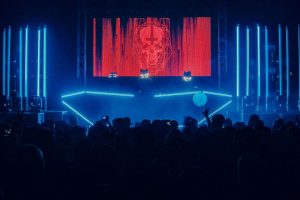 The chanting was soon interrupted by sounds of ear piercing sirens and a ‘Caution’ message flashing across the screen. The ringing became louder until it was shattered by one single booming bassline. The resistance was announcing their presence…

Resistance to the Kannibalen Group soons appears. Free-thinkers, renegades, rebels from all over unite under the leadership of a trio called Black Tiger Sex Machine, creating a network called the BTSM Church.

The rebels took their place on stage, beginning with the most earth-shattering track from their new album. The bass literally shook the entire venue (I’m not kidding, I could feel the ground vibrating under my feet.) Their sound was taking over and causing an uprising in the crowd.

The trio took BTSM church along with them on a journey through New Worlds. Most of the bangers from their newest album were heard loud and clear throughout the performance along with songs from their previous albums and a couple surprising samples in there. Those samples ran the gamut from excerpts from popular dubstep tunes to rap songs from over a decade ago. It was a mindblowing masterpiece of bass greatness. 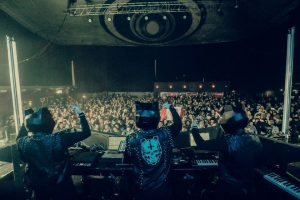 The masked group removes their helmets for the last couple tracks of the set, a shock for most of the crowd. The BTSM chant begins again as Julien grabs the mic and climbs to the front of the stage with Marc and Patrick close behind. But that didn’t signal the end of the show. They brought out the three other members of the Ceremony for the last couple tracks. It was an absolutely mind-blowing experience.

In 2053, the only humans left live underground, in decrepit old subway tunnels, sewers and cave networks.

A young woman who has lived in a tunnel network for most of her life yearns to see the sun again. Her father, who fought with BTSM, was killed when she was a girl. He had taught her since she could walk how to fight and how to survive. Against her mother’s wishes, she joins one of the hunter groups traveling to retrieve supplies in the ruined city above. But her ultimate goal is bigger: she wants to retrieve one of the lost BTSM helmets, an emblem of the resistance, and rally the people to combat Kannibalen once again.

Check out the musice video for Zombie, released today.

The music video for Zombie is finally here! This is the next chapter in the post-apocalyptic story of the BTSM Church.

Don’t miss the chance to see the Ceremony Tour. BTSM still has over a dozen stops left on the tour in addition to playing a number of music festivals including Digital Gardens, EDC, Spring Awakening and Dancefestopia. They also asked the crowd who would like to see them back at Lost Lands which warranted a roar of affirmation from the crowd. Bottom line is: see them somewhere, this isn’t an experience you won’t want to miss.

“They are not human.”

Your EDM Genre Guide For Deciphering That Festival Lineup