2016 is a new year for the veteran DJ Carl Cox. Leaving behind his residency at Space Ibiza, the EDM legend decided to try his hand at another element of the industry. After announcing that he’d be moving on from Space, he presented his plans to produce his own music festival that would be coming this April. Now, we know way more about the 2-day Australian event that Cox titled “Pure.” With one day of the festival being held in Sydney, and the next day in Melbourne, it’s sure to be quite a treat for the Land Down Under. “All I’m going to be concentrating on is underground DJs who have a vibe for house and techno,” explained Carl Cox in an interview with InTheMix.  The line up will post Cox himself, as well as Joseph Capriati, Format:B, DJ HMC, and Eric Powell. But, see for yourself, check out the lineup below: 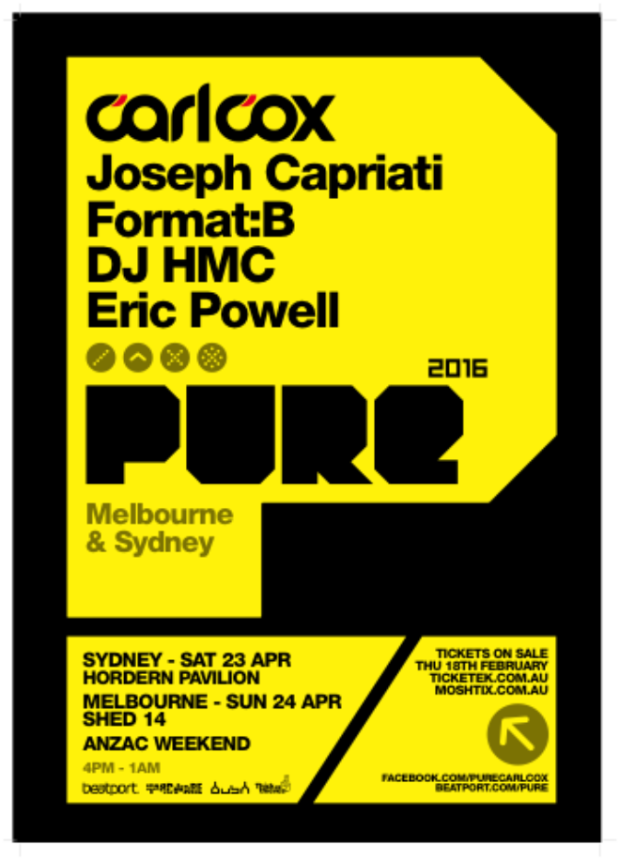 Pure 2016 will take place from 4PM – 1AM both nights of the event hosted on Anzac Weekend (similar to Labor Day in the United States). Sydney will experience the festivities on Saturday, April 23rd, 2016 at Hordern Pavilion and then Melbourne will get it’s dose of Pure on Sunday, April 24th, 2016 at Shed 14. Tickets will be available here on Thursday, February 18th, or for more information on the event, check it out on Facebook.