Charles D Releases ‘Heavy’ And ‘So High’ On Factory 93 Records

Charles D, the rising techno DJ, and Producer, has announced that he’s releasing a 2 Track EP this upcoming Friday, April 8, 2022. He has received support from the biggest names in the music industry such as Eric Prydz, Cristoph, Adam Beyer, Above & Beyond, Markus Schulz, and more. He has played at ARC Music Festival that took place in Chicago in 2021 and opened up for Eric Prydz at the afterparty at Radius.

His first track on the EP is ‘Heavy’ and it hits hard, whether you’re in the gym for a killer workout or you’re in the club this track is for sure to get you pumped up and hype. The second track on the EP is ‘So High’ and it’s more of a melodic techno track that’s progressive. This track is going to get you high on a journey with all of the various production elements on this track.

On the first Friday of each month, Charles D releases a new radio episode where the audience can get a full display of his techno taste. Check out Synthesized Radio on his website here. Pre-order the two tracks from Beatport here. 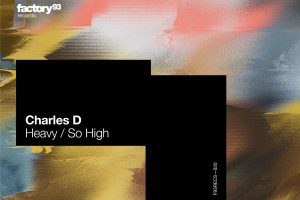