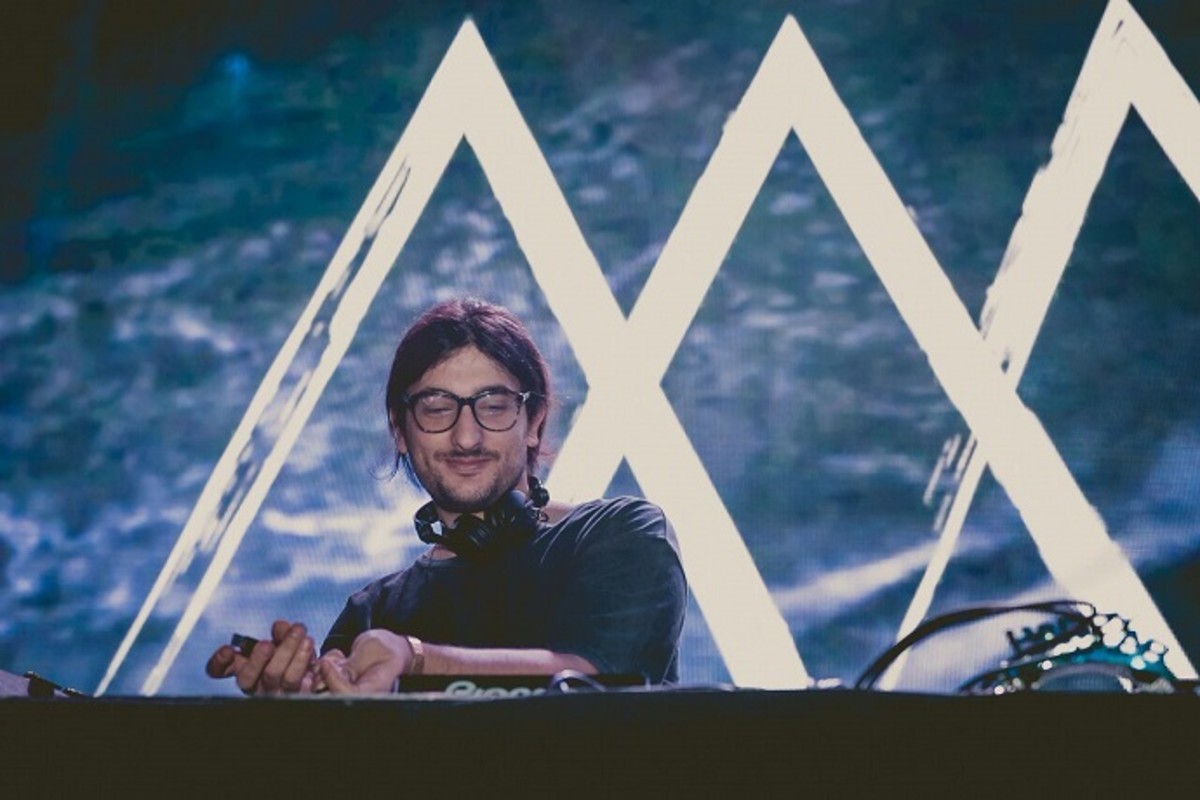 Underground But Accessible: An Interview With Cyril Bitar

Cyril Bitar is the founder of Underrated Presents; an event company responsible for parties all around Los Angeles including the ever-growing Minimal Effort.

In just a few short years, Minimal Effort has become a leading brand for house and techno in LA. Underrated came into the fold at a time when underground events were in huge demand, but there wasn’t much supply. With Underrated’s commitment to the music, a strong community formed around the brand that has allowed Minimal Effort to grow into one of the most anticipated events of the year.

At the end of this month Underrated will host it’s annual Halloween edition of Minimal Effort and we sat down with Bitar and chatted about what’s in store.

HL: Which artist are you most excited for on the Halloween lineup?

CB: Since I book all these artists I appreciate all of them, but my favorite artist on the lineup is Damian Lazarus. He’s one of the artists that got me into that kind of music in the first place, and he had a big influence on my music and my bookings as well. He has really nice stuff coming out, he has his own label, and I have a lot of respect for him as an individual and an artist. It’s the first time he’s headlining a stage for us so we’re excited.

HL: Minimal Effort will be using a brand new venue, the Enox Events Center. Tell me about it. How will it fit into the aesthetic of Minimal Effort?

CB: It’s pretty much a raw space. We’re bringing a bunch of production, and we’re going to change the way its going to look and feel just for the event. We’re pretty much building everything; the stages, the bars. So when I first saw the venue I felt that this is what the Minimal Effort vision is about. There’s an outdoor area that has a nice backdrop. There’s a bunch of indoor spaces. It’s warehouse-y. We can get really creative with the design, and it just fits for Halloween especially. We can do pretty much anything we want over there. We have creative control, and it’s just a sick setting. It’s a special place. After Minimal Effort I think a lot more events will use it.

HL: How does what you’re doing with Underrated and Minimal Effort compare to the vision you had in your hometown of Beirut?

CB: It’s crazy really. Underrated started as me and a bunch of friends in my room wanting to play music, and nobody was giving us the opportunity. So we decided to start throwing our own events. That’s where it started really. Two kids who were really passionate. I was really passionate about music, and I wanted to create a community that shares that kind of sound. I started throwing big events over there before moving here, and once I came here I felt like this market and the industry here lacked something.

When I first moved here it was mostly EDM. You got the Exchange, you got the Nocturnal, the HARD. Those are cool and I have respect for those people, but it lacked something that was underground, and also accessible. Not too underground because I want to share this with as many people as possible, but while staying true to the sound of the underground. Because to me, I always felt like I’m not the only one who likes that kind of music. There are so many people who need something to relate to as far as an event that caters to that sound in LA. There was nothing like that.

HL: Something I’ve noticed from being in this scene is that when not a lot of people know about something; an event, an artist, etc it’s something to be celebrated. Obviously it’s cool to be at 20 person event with a great DJ, but it’s also cool that the audience is expanding

CB: Absolutely. Minimal Effort started in a warehouse. My first Minimal Effort was like 200 people. In a grungy, illegal warehouse space where we put our own bars and all that stuff. My base is the warehouse. I wanted to be the guy that’s booking all the up and coming artists, but I got to a point where I couldn’t keep doing it small. A lot people like that stuff and we want to make it accessible to everybody that wants to something other than EDM.

HL: As an event, Minimal Effort is in a class of it’s own. Not a festival and not a regular club night. How do you separate Minimal from a more standard event format?

CB: That’s pretty much what Minimal Effort is about. Minimal Effort is an event that’s not too big where it draws the wrong crowd, but it’s not too small where it doesn’t draw a big enough crowd. So for us we always wanted to keep growing it, but always making sure it stays true to why it started: the music. Always booking the right acts, always having the right crowd. Our promotion, in a way it’s like, if you don’t like that stuff, it’s not for you. It’s not something in-your-face where it’s cheesy or anything. So we want to grow it. We want to grow it to 10,000 people, but if it grows to that it’s never going to be over the top. It’s always going to be intimate in a way.

HL: What sort of challenges do you face as a promoter in Los Angeles with so many competitors including large companies like Insomniac?

CB: I think competition is very healthy. I appreciate and respect every other promoter that’s trying to do something different in this market. Insomniac and all these big guys paved the way for people like us to believe that you can do it big too if you believe in it. It’s motivation. There are so many people doing it, and the market is so alive. It’s just about putting the right product out there, the right brand that attracts that right crowd, so to me it’s healthy. It helps [the scene] grow and I want everyone to do well. At the end of the day it’s all for the music industry so if everyone’s doing it well it’s just going to keep growing.

HL: How do you think LA fits into the global techno community alongside stalwart cities like Detroit and Berlin?

CB: LA is an amazing and exciting new market in this industry. I’ve been to Berlin. I’ve been to Detroit, and a lot of other places in Europe and the market is more advanced over there because the culture has allowed it to advance. Here, from when I first came here to now, I’ve seen such an amazing progression and I think LA will be in the next five years, if it’s not already right now, a top 10 city in the world for that kind of music. Everybody plays here. Everyone wants to play in LA. It’s cool. LA has this cool factor, and I wouldn’t be surprised if it becomes top 5 in the next 10-15 years.

HL: When you say the market allowed it grow, would you say the growth in Berlin has been more gradual compared to LA where it’s kind of exploded?

CB: I think now, in Germany, it’s no longer growing. It’s more like it already blew up and its so big now that it’s growing slower over there. Whereas here, the boom has already started and it’s just peaking. We haven’t peaked here. In Berlin it’s not bad, but I feel like it peaked over there in a way where it’s the top destination for deep house and techno. It’s Berlin. Everyone would say Berlin. LA hasn’t peaked yet. There’s so much potential here. And you know if the laws were easier here, like if we could go until 4 or sell liquor after 2, LA would suddenly jump up in the next 2-3 years.

HL: LA has a lot more strictures on large electronic music events compared to other cities. How has that effected your events and the market in LA as a whole?

CB: Now that I’m doing events close to that scale, I’m realizing that the city has weird ideas about what we do because of some unfortunate events that happened to other promoters in LA, but I don’t think they understand that events like Minimal Effort are built differently than events like HARD and Insomniac. We’re 21 and up. We’re not about rave culture. We’re about clubbing culture. It’s totally different.

HL: What’s next for Underrated and Minimal Effort? In the past you’ve worked with parties from outside LA including Do Not Sit On The Furniture and Audiofly’s Flying Circus. What are some other parties you plan to bring to LA?

CB: Every year we do Flying Circus. Thats one of our sister brands here in LA. We’re going to produce Do Not Sit On The Furniture again. We’re working on Elrow, which is a huge Ibiza party brand. It’s all over the world like Circoloco. We also have plans to bring Afterlife here which is Tale Of Us’s brand. I’m always on the lookout for opportunities to produce something really cool here. Outside of Minimal Effort we’re gong to do six to eight big shows, plus Clinic Wednesdays has been going for almost four years now.

HL: Do you have plans to do Minimal Effort outside of LA as well?

CB: We don’t have the exact dates and nothings confirmed yet, but we have plans after this year for having one date in New York around Spring time. It will be Minimal Effort New York. We’ll sell 4-5000 tickets, and from there we will see. We’ve been hit up by people in Canada to do shows there. We want to expand over there, we’re just taking it one step at a time. We want to focus on our market first. People always ask me “why don’t you do this or that?” and I say it’s going to happen, we just don’t want to rush anything; Build it here as strong as possible and then take it outside.