Danny Tenaglia’s 60th birthday is coming up and he has announced an epic live stream for UNICEF. The live stream will be in collaboration with Beatport, Gray Area, and Jukebox with all proceeds going directly to UNICEF. The fundraiser will be streaming live on Twitch, Facebook, and YouTube from March 6-7 and will be supported by a star-studded lineup.

Beatport was founded in 2004 and is the home of electronic music for DJs, producers, and their fans. Beatport provides unique music discovery tools for fans and DJs and refreshes its music collection constantly with hundreds of exclusive tracks by the world’s top artists. Gray Area is an international electronic music event and production company whose mission is to blur the lines of various sub-genres and cultures. Jukebox was founded in 2008 and is a public relations company that is always seeking something new. Jukebox has assisted in over 200 international music festivals and events in 50 different countries including the USA, Costa Rica, and Austria. 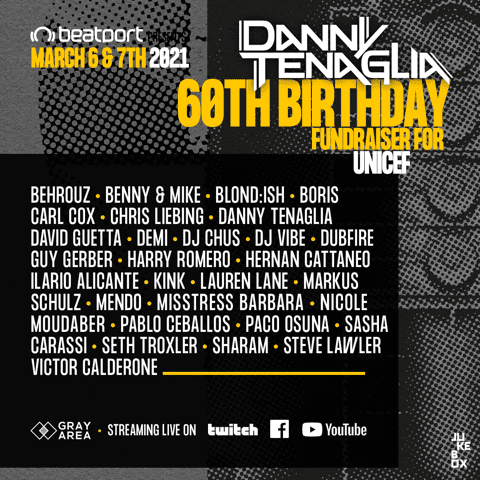 The announcement of Danny Tenaglia’s 60th birthday fundraiser for UNICEF features an impressive, star-studded lineup. Carl Cox, David Guetta, and Seth Troxler are among a few of the dozens of DJs appearing on the birthday fundraiser livestream. The free-to-watch stream will accept voluntary donations with all proceeds going directly to UNICEF. Fans can register for the event at http://birthday.dannytenaglia.com/ in order to be entered to win prizes such as signed albums, t-shirts as well 5 spots on Danny’s guest list.

Danny Tenaglia is known within the industry for his 24-hour sets as well as his residencies at some of the most established clubs in the world. Tenaglia’s music spans various sounds and styles that will be celebrated throughout the course of his live-streamed fundraiser. Tenaglia will turn 60 on Saturday, March 7 (the second day of the live stream).

For all other information regarding Danny Tenaglia’s 60th birthday fundraiser, visit his website.