The Time I Delivered a Pizza to a Dubstep DJ

The day was Wednesday September 14, 2016, the time was 10:37 P.M., and the location was Papa John’s Pizza in Tallahassee, Florida. A slow night indeed, for many people in Tally were getting ready for Getter’s show instead of ordering pizza. I sadly twiddled my thumbs near the pizza oven, knowing the co-producer of a song I had recently become obsessed with, “Blood” was a 5-minute bike ride down the street about to perform, and that I, a college student, legitimately could not afford the $20 ticket. Listen to the song and you may understand why I proceeded to do what I did on this currently daunting but potentially epic night.

With no calls to answer, no pizzas to make, and no money in my pocket, I decided to do what I do best, scheme. Scheme hard. I realized that money isn’t the only form of currency, and that I, a pizza maker, was standing next to a 10-minute old form of glorious dough- no pun intended. I had recently added a topping to a pizza that the orderer did not want, and when we messed up pizzas at our Papa John’s, there was not much to do but put it to the side and eat it when we got off work. This was it- my ticket to Getter would be in the form of pizza, and the clock ticked loudly as I looked up and saw that I was finally off work. 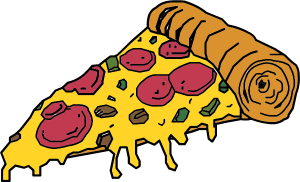 I asked my manager if he wanted any of the mistake pizza and miraculously he said no. I swiftly grabbed the pie, threw it in a bag, and hung the bag from the handle bar of my bike. Covered in flour, without a care in the world, I somehow managed to ride my bike to the venue with a large pizza pie dangerously hanging from my rickety handlebars. I walked up, in full uniform, to the venue security, and stated that I had an order for Tanner Petulla.

They immediately got someone to take me back to his tour bus so I could deliver him a pizza that he did not order. On the way back, in full performance mode, I asked the guy “so what is this, one of those techno shows?” He looked at me in shock, like I was the dumbest human being he’d ever met, and of course, my basshead friend who happened to be working security that night yells “GIRL WHY AREN’T YOU HERE? YOU LOVE DUBSTEP!!!” I cannot make this up. I go “shhhhhh” and proceed on with my plan. This was it, the moment I had been planning for all night. I was going to pay for my Getter ticket with Getter’s money.

I knocked on his tour bus door and there he was. “An order for Tanner”. He seemed a bit flustered, I mean he was literally about to go on stage, and here I am, a sweaty, flour coated idiot holding my hand out for payment. He takes the pizza, hands me $20, says to keep the change, and closes the tour bus door.

You would not believe the feeling of success that washed over me. Not only did he buy the pizza, but he gave me the exact amount that I needed to purchase a ticket. I pranced over to the counter and reveled in sweet victory as I skipped into the venue in my Papa John’s uniform with the glorious, high pitched noises of “Blood” pumping in the background.