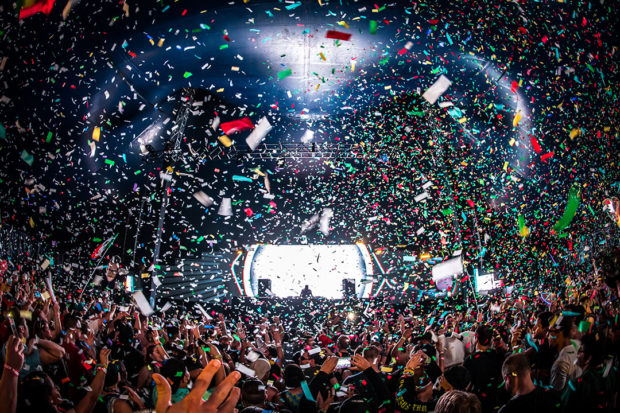 While at Electric Daisy Carnival you can choose the setting you want for the hour by traveling from stage to stage and stopping wherever your heart desires. Along the way, you’re met with something new around each corner, whether it be captivating dancers suspended under low to the ground hot air balloons, or a trail of life sized mushrooms leading you to the unknown. Each stage has its own persona, drawing different crowds for each set, but one thing I couldn’t help but notice was the mysterious allure of the neonGARDEN.

This stage was not quite heaven and not quite hell, but the in-between. This purgatorial shrine wrapped me up, bounced me around between beats, and spit me back out again leaving me with more questions than answers. It’s constant magnetic pull was felt from all the way across the festival, and I couldn’t help but return for more. On Friday, Nicole Moudaber’s moodZONE drew a out a string of emotions from its audience, featuring Sinopoli, Hito, Lauren Lane, Patrick Topping, Pan-Pot, Paco Osuna, and the woman herself, moodZONE’s effect was palpable to all who set foot under the neonGARDEN tent.

The unexplainably heavy and repetitive bassline with the sound of cymbals in between had the whole tent bouncing up and down the whole night. The noises paired with the bass created the atmosphere of a techno wonderland. Take a drum set for example, the large foot pedal drum is the bass and the circular cymbals are the noise in between. This constant beat mixed with the euphoric sounds of an electronic keyboard, although repetitive and minimal, was enough to draw in a huge crowd of festival veterans to dance the night away. The darkness, in contrast with bright, awakening lights and the comfort of the pounding bass created a space filled with satisfaction. moodZONE aids in the understanding that less is more, and Nicole Moudaber fostered this philosophy through her minimalistic display.

Saturday brought along Jamie Jones’ Paradise which manipulated our minds & bodies in the best way possible. Carlos Mendoza, Kevin Knapp, Richy Ahmed, Tiga, The Martinez Brothers, and Jamie Jones delved deep into our being and shook us to the core. Under the tent, respect is earned, not given, and Paradise allowed us a space to interpret the talent that was surrounding us, and respond with dance.

Answering the invitation to the neonGARDEN brought about a sense of respect for the talent that was gathered there, and as the beat was building, I felt like I was part of a secret musical ritual that was up for my own interpretation. With Nicole and Jamie as the gardeners, and their audience, the seeds, the end of the weekend brought about growth and change, an impact that will only be felt as I enter the neonGARDEN next year, and surrender my soul to the in-between once again.
Featured photo by: raverrafting.com