Summer is over, and nearly all of the festivals in 2017 have come to pass.

There is something to look forward to though; everyone’s favorite day to spend in the dark.

Yes Halloween is here, and all you goblins and ghouls will give up camping gear for costumes, and party one last weekend before the promoters go into hibernation until Spring; planning their next activities.

But don’t fret. Halloween may mark the end of festival season, but there are plenty of options to keep you warm through the winter.

In a span of just a few years, Minimal Effort quietly became one of the most respected dance-music brands in Los Angeles. LA is full of promoters throwing club nights and festivals, but there isn’t much in between. Underrated Presents found the balance with Minimal Effort; a multi-room event that provides top-notch talent in an intimate setting. This year the lineup features Damian Lazarus, MK, Dusky, and Claptone hosting his own Masquerade Stage all in a brand new venue.

Insomniac’s Halloween spectacular returns for it’s seventh year, and the lineup did not disappoint. In the spirit of darkness, Factory 93 will take over Cannibal’s Tea Party with two insane nights of house and techno. Friday is Paradise with Jamie Jones and a crew of known cohorts. Saturday Nicole Moudaber, a.k.a. the Queen of Darkness, brings the infamous sound of Mood Records. The rest of the lineup is not to be scoffed at either with Nero, Madeon, Eric Prydz, and a live set from Boys Noize. 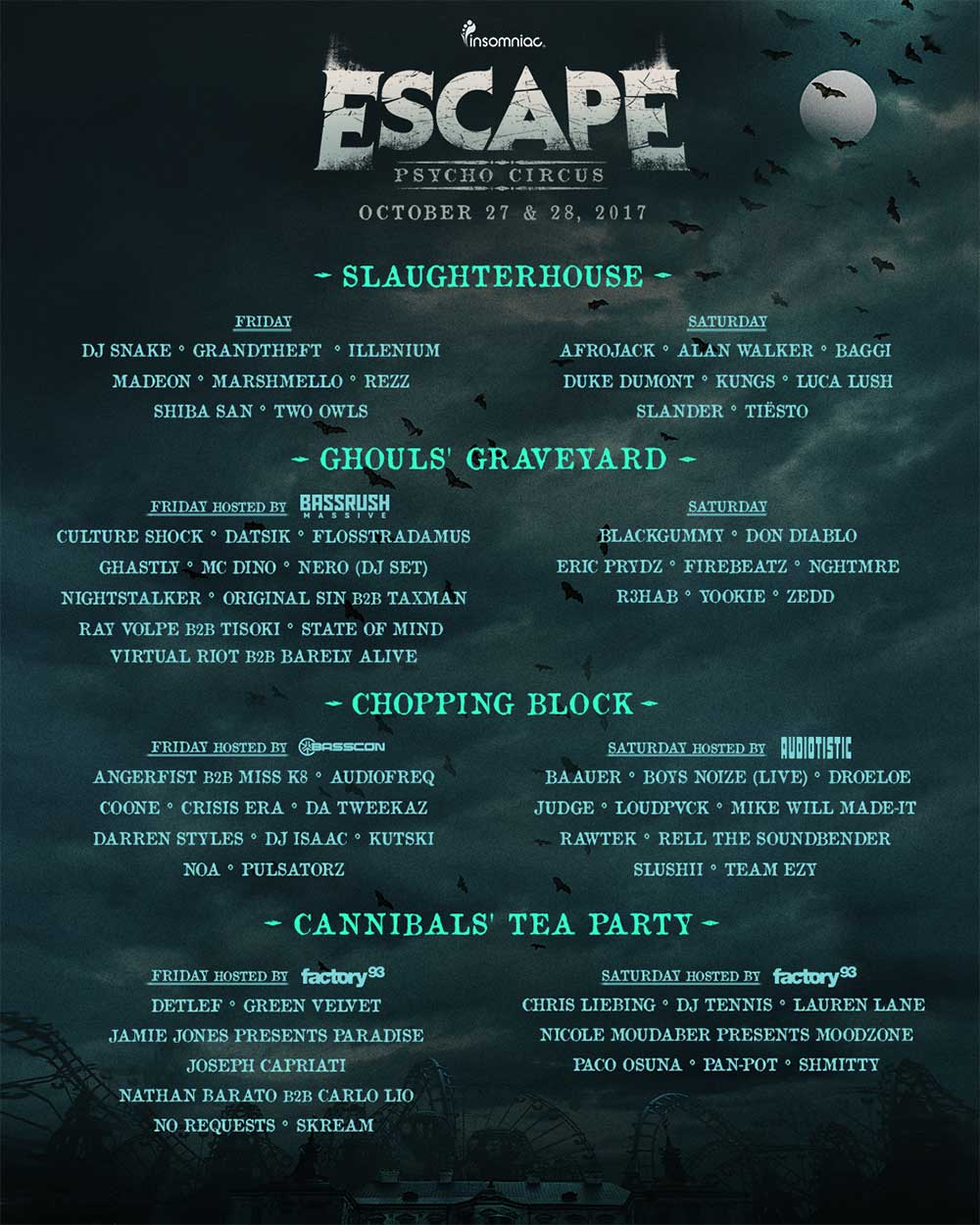 This was originally announced as Worthy, Maximono, and “A Very Special Guest,” but now that Dirtybird Campout has passed Claude was free to announce his return to Exchange for a proper Dirtybird function. Frankly since Campout moved up north the Birds haven’t made it to SoCal as often, so the City of Angels is more than happy to spend Halloween with the Claudefather.

Last year, Laidback Luke hosted his Super You&Me party at Exchange the weekend before Halloween. This year, he’s calling all his superhero-clad friends out on a Tuesday for Halloween night. Costumes are encouraged. LBL always dresses up, and after more than 20 years behind the decks he knows how to set a spooky mood. Use code EDMMANIAC to save on your tickets!

Another event the night of Halloween, and this one features dubstep from open to close. It’s not clear what the “3” refers to, but there are 34 DJ’s on the lineup. Perhaps that means no less than 3 DJs will go back-to-back at any point. Maybe it means there are three stages. That information will soon be revealed. Oh, and a costume is required. 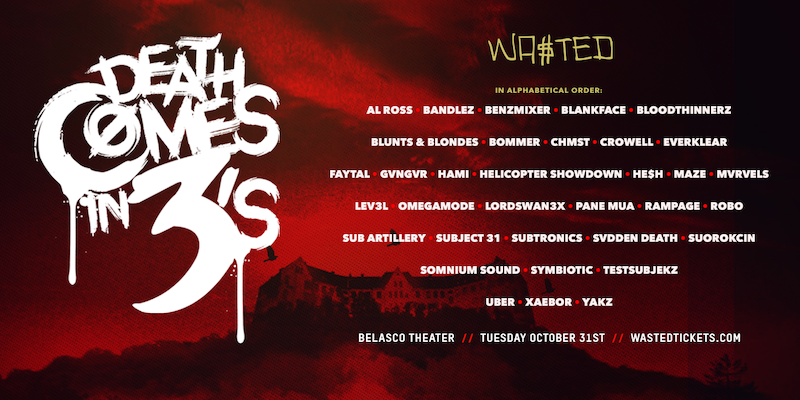 SF is once again home to Insomniac’s Halloween experience, Boo. This two-day, one-stage event is a no-holds barred EDM thrill ride. Numerous high-energy heavy-hitters like Dillon Francis and A-trak are on the bill, and Saturday is hosted by Deadbeats, Zed’s Dead’s new label. Sure to be a good time.

For those who are looking for something different within the electronic music scene, this is a good option. Familiar names are featured like Tensnake, Matthew Dear, and The Black Madonna, but the vibe is sure to be different from all the events listed above.

For those who aren’t familiar with KCRW, it’s slogan is “Always Eclectic.” You can tune in from evening to morning (they play NPR during the day) and hear all different types of music, including electronic. And unlike other big radio stations there isn’t a set playlist, so you won’t hear the same songs every couple hours.

As a result, the crowd at this event will not consist of people counting pennies until the next festival. Probably older than most rave crowds, and most of them will be there to enjoy a good time rather than party their faces off.

If you’re looking to get outside the electronic sphere, check out this one. The Growlers are responsible for Beach Goth and other music festivals around SoCal, and they’ve finally ditched the Observatory grounds as a venue. Now they’re hosting awesome musicians like Dan Auerbach, the Yeah Yeah Yeah’s, Danny Brown, and Modest Mouse at cool places like the port of Los Angeles.

LA enjoyed Jamie Jones’ Paradise in the Park back in May. Now the esteemed producer, DJ, and label boss is bringing the party to Las Vegas on Halloween night. In a place where true house music is hard to find, it’s dope that Jamie Jones is filling XS with some of the best house DJ’s in the world. Usually artists like the Chainsmokers and Marshmello play XS. On Halloween it will be Jamie Jones, The Martinez Brothers, Hot Since 82, and Lauren Lane.

Paradise Las Vegas is Halloween Night, but the weekend before Jamie Jones and The Martinez Brothers will be here; at Circoloco New York with Seth Troxler, Loco Dice and more friends. This event is sure to be one for the books. Two days of Ibiza vibes from 10 p.m. to 8 a.m. in a Brooklyn warehouse.

Make A Colorful Kickoff to 2018 with Life In Color Festival