How Dance Music United My Brother and I Amidst Tragedy

To some, electronic dance music is a hobby, to some, a party, and to some, a massive influence. I belong to the group of people that has been massively influenced by EDM, and here’s why. My journey towards a full understanding of the music and the culture involved loss of a brother, and the gaining of an impenetrable bond with my other brother, who has been my electronic music mentor and who gained the strength to come out to me through listening to this music. Here is our story, as I’m sure many of you will be able to relate, and we’ll catch you guys dancing in front of a stage sometime soon.

Fully expecting to be the only ones dressed all in white, Evan and I were thrilled to fit right into the sea of ivory, for everyone in Denny’s was there for the same reason, and the sense of unity already hit me as we walked out of the door following the trail of people decked in white to the promised land. With a small backpack containing only our change of clothes, shampoo, and phone chargers, the bare essentials for after the pandemonium, we arrived at the Wal-Mart across the street from the Sun Life stadium and hid our belongings in a bush behind the store, for we had not locked down a place to stay for the night, since we were too young to book our own hotel room. The journey we were about to partake in did not require the accompaniment of earthly possessions.

Okay, we brought our phones, tickets, and IDs, but that’s it. I handed Evan his ID and our brother Lucas’ ID fell out of my wallet. Lucas had passed away a year before from cancer [ppp_patron_only level=”3.99″ silent=”no”]

when he was 16 and I was 18, and Evan and I had grown so much closer in our pursuit of happiness in honor of Lucas. For lack of a better phrase, when one door closes another door opens, and thanks to our guardian angel, Evan and I would soon open the door that we always have and always will belong behind, together.

The Calm Before the Storm

After being searched by a security guard, we had finally arrived. We looked around in awe at our home for the next 10 hours, and boy did we like what we saw. A vast field with three different stages prepped for mind-blowing production, subwoofers as big as cars regally mounted for optimum audio indulgence, 40,000 beings all beginning to vibe together to the music, and magnificently animated screens behind the DJs who would soon singlehandedly dismantle and rearrange the minds of at least my brother and I, and hopefully the rest of the 39,998 festival-goers, into blissful oblivion. We were at Life in Color: Rebirth electronic music festival. It was time.

Customary at music festivals, the beginning of the day started at 2 pm with up and coming DJs and as night approached, so did the real talent. Evan and I checked out all 3 stages, main stage, bass stage, and trance stage became somewhat familiar with our surroundings and picked a stage to vibe while we waited for the superior DJs to make their appearance later in the day. The main stage was colossal, the bass stage boasted all of the DJs who were known to reverberate your spine with perpetual bass, and trance stage, which wasn’t really Evan’s chosen genre of EDM, had the best visuals such as lights and lasers. Since the second Evan heard EDM, dubstep to be precise, every aspect of the genre entranced him. I, not so much. I was fascinated with hip-hop and was very reluctant to delve into this unfamiliar world of few lyrics, crazy noises and bass, but Evan convinced me, enticing me with the promise of a 2Chainz performance in the middle of the festival, to enter this supposed electronic Eden. We had been to one festival the year before, but I simply floated around, not truly understanding the attraction or even knowing who any of the DJs were. I still didn’t know any of the DJs here, but I could never say no to my brothers. Evan, although only 15 years old at the time was my guide to everything electronic, the contagious energy of the crowd cajoled me in, and my body could not stop moving to the beat. So far, so good.

Without a worry in the world or even thought of our backpack in the bush with our only belongings probably getting soaked, Evan and I struggled to keep our phones dry during the first big DJ set of the night, Excision. One thing we could hold onto though was the fact that we made a pact to live our lives for Lucas, who couldn’t. Right when electronic dance music started becoming popular, Lucas had bought tickets to Excision. With the strong belief that fun heals all, I was very excited for him to get out of the hospital and enjoy a great night with his friends until his doctor decided that such a show would be detrimental to his health and that he couldn’t go. 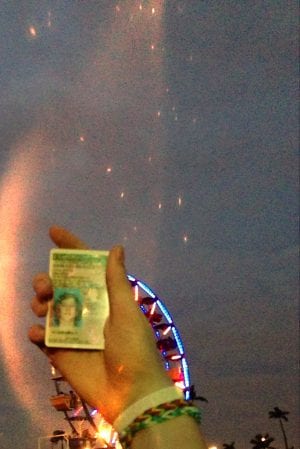 I hugged Evan, and we held Lucas’s ID up in the air together, celebrating our newfound appreciation for life because of him.150,000 watts of ingeniously created intense dubstep was blasting towards the audience from the subwoofers along with 400 gallons of neon paint, 5 gallons a pop, and we loved every minute of it. I danced around somewhat aimlessly, for I still could not fully grasp the allure of the music itself, and I jealously eyed my brother as he lost himself in the beat, fully aware of each and every sound and why it was there. But one thing I did know was that I was born to party and that I would take any risk that I had to take in order to do so, even if it meant traveling to Miami without a place to stay for the night. Excision’s set ended, and immediately a new DJ group called Dirty Phonics arrived on stage as darkness ensued over the venue. I was a bit excited for this set, for Evan had mentioned the name to me before the festival, and is a Creative Writing major who liked dirty-sounding rap beats, the name Dirty Phonics seemed alluring to me.

As I now know, at every festival when it got completely dark, the producers staged a little introduction revolving around the particular theme of the festival at hand. This year the theme of Life in Color Miami was Rebirth, and we were at the main stage where the introduction was to take place. A soothing, feminine, alienesque voice came over the speakers “Breathe. Let go of everything. You’ve survived THE END. Are you ready for your rebirth? There is only hope, the hope of a new and better world. The hope of a society free from hatred, and hope, of life in color. To every end, there is a new beginning. Are you ready to escape? Are you ready to believe? Prepare for rebirth”. The bass dropped and a fascinatingly beautiful woman dangling delicately by her hair from the top of the stage descended into my view and she danced amidst the lasers and paint explosions as my mind was thrown into unimaginable dimensions involving the mind-altering string of words that was just introduced to me.

Nothing else mattered but the music, my brother, the vitality of the crowd, and the intrinsic ideas that were just presented to me. This was my rebirth. This was where I flourished. This was where I belonged. I looked over at my brother and grabbed his hand, unable to speak with the unavoidable smile that had spread across my face. Our telepathic connection at that moment told me that he had just experienced the same reincarnation as I had. “To every end, there is a new beginning”, the loss of our brother Lucas was an end, but inevitably a new beginning was formed between Evan and me, and my personal understanding of the festival and electronic music culture was finally reached. Dirty Phonic’s music will forever be the soundtrack in remembrance of our reincarnation together through EDM.

Now, all we had to do was wait until morning when the bus would come to pick us up for Orlando. Through our all-night conversation, I realized that Evan and I are basically the same people with the same beliefs, values, thoughts, dreams, and stream of consciousness. Having a mutual bond like this with someone I shared a womb with is indescribably fulfilling. We leaned on each other as we braced ourselves through the exhaustion of the cruel Miami night, still somehow satisfied beyond belief.

The bond between my brother and I grew to the point where he trusted me enough to come out to me at a nightclub with electronic music playing in the background. “There is only hope, the hope of a new and better world. The hope of a society free from hatred…” My mind raced back to our rebirth, and I explained to him that the EDM scene is very accepting, especially in college, and that he had nothing to worry about. I told him how much I love him, although he already knows this, and we danced the rest of the night away to some of our favorite songs.

Through the loss of our brother and the countless other struggles we had faced together in our lifetime, electronic dance music came through for us at a time when we needed it most. We sat down at our kitchen table and we made kandi for each other, and as I strung lettered beads amounting to the words “embrace rebirth” on my bracelet, with Dirty Phonics playing in the background, I knew that every end has a new beginning and that this was the start of ours.

Our Journey Through EDC Orlando 2019

Why Trance Music Means The World To Me