Envision Music Festival has released their stacked lineup for their community built 4 day music & art festival on the Pacific Coast of Costa Rica. Taking place in Uvita, Costa Rica, everyone will gather on February 28th through March 3rd in a beautiful jungle directly next  to the ocean.

While starting 9 years ago, the community has stepped it up and successfully turned it into an electrifying and immersive experience for all. They’ve hosted a reforesting program which has been victorious in planting more than 12,000 trees in the past seven years as well as creating multiple stages inspired by the local Tico way.

It can be said that most of the artists are local and on the rise but this year they are bringing in some bigger names from around the world. Tycho will be seen taking over for a special sunrise set, as well as GRiZ as he Chases the Golden Hour. Josh Wendel, Envision Festival Founder has come out and claimed regarding the lineup announcement,

“ The creative and conceptual process behind our stages is another core element of our production and identity. We create a 360-degree sensorial experience not only through high class music, but also intricate visuals and captivating performances. The unbreakable bond between some of the most talented woodcrafters and local bamboo builders is reflected in all our creations, and we’re honored to share the love and the care behind our designs. Each stage will be an entirely new build this year, and we can’t wait to share them with you!” 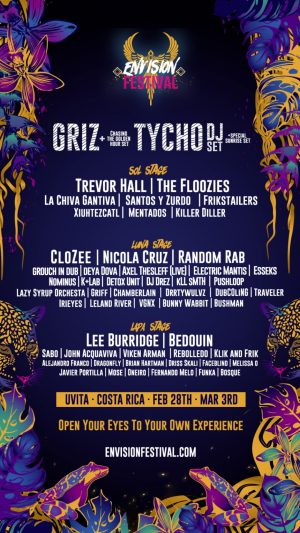 Find Your Home For EDC Orlando With Home BASS