October 11 — Insomniac Events released their lineup yesterday for Escape From Wonderland in Southern California. The announcement came with significant backlash from the community, prompting CEO of Insomniac Pasquale Rotella to address reactions through a post on his Instagram account:

[quote] Happy lots of you love the Escape lineup! Those who complain are always the loudest, but I love your passion. I suggest you keep an open mind toward discovering something new, the experience you have lies in your own hands. Some of history’s greatest artists were not the most famous, but that didn’t make them any less skilled at their craft. Come together, celebrate life, hearing amazing sounds, see the colors, feel the love and get inspired. If you allow it, we can take you beyond your wildest imagination.

Escape From Wonderland will be held on October 26th at the San Manuel Amphitheater and Grounds in San Bernardino, California for the third time. This will be Insomniac’s second to last “Wonderland” series of the year. The last one, “White Wonderland” will take place in Anaheim on New Years Eve and is Insomniac’s all-white attire event, for ages 21+.

Insomniac has had a very busy year. With Electric Daisy Carnival (Insomniac’s flagship multi-day festival) for the first time in Chicago and returning to cities in Las Vegas, Puerto Rico, Orlando (November), and New York, Insomniac has also has had it’s share of unhappy fans voicing their opinions about production, location and even the artists headlining the event. The most recent topic of debate came with Escape’s lineup, where some fans expressed disappointment. Here are some comments being said around the internet:

“Pasquale what kind of shit is this?”

We immediately saw the backlash but didn’t really understand why. In a climate where EDM festivals are popping up left and right, yes, some are bringing heavy names. Notable Halloween Festivals include “Something Wicked Festival” in Houston with Tiesto, or “FreakNight Festival” in Seattle, Washington with  Calvin Harris, Afrojack.. you know, the typical run of the mill DJs that most of us have seen before. In NO way are saying these DJ’s aren’t talented, but the reality is  — these DJs are names that are synonymous with the EDM world and are quite popular amongst several fans. So why not bring them to Escape? That’s where we think the stroke of genius came in. Insomniac is bringing some heavy names to Escape like Hardwell, Steve Angello, Richie Hawtin and W&W but they are ALSO bringing names that aren’t as big, like Ookay, Noisia, Delta Heavy, Brillz, and more.  Insomniac is introducing  artists that aren’t as “big” in the scene and are really taking the time to introduce them to their audience, many for the first time. Why is that genius? In our opinion, they didn’t have to do that. It’s possible Insomniac could have booked most of the household names but they focused on “music discovery” and are giving DJs (and fans) the opportunity to experience something new. It’s a gamble, but it’s very much at the heart of Insomniac’s brand. It can be said, that when you bring huge DJs that have such cache in the world (both inside and outside of the EDM bubble) that you are attracting a larger audience, maybe even some not as closely attached to the EDM scene as others. So it’s a gamble. Insomniac could sell out the show with tons of big DJs, or they could rely on fans that are interested in experience different talent to help sell the show. It’s genius. Fans that attend Escape are going to be a different crowd, the crowd that has maybe heard of these smaller DJs, but in their eyes are considered big DJs.  Insomniac is tapping into what is now a  niche market of people who are interested in attending solely on discovering new music or styles and enjoying the production spectacle fueled by fireworks and theatrical dancers, not those just going to hear a DJ play a song they’ve heard countless times (not as if there’s anything wrong with that) but people that genuinely want to hear new genres of music, or are familiar with Insomniac enough that the lineup is simply irrelevant.

It’s a gamble and a risk that Insomniac is taking by not bringing big DJs, but this is something Insomniac has always been about — the discovery of new music for their fans, making new friends and  just enjoying the experience. Insomniac spends countless  amounts of time carefully constructing a magical experience for their audience to take part in, complimented by DJs that become the soundtrack to your festival experience. So while you won’t see all “the big names” on the lineup, you will see tons of smiling faces of those attendees who will be walking through the gates eager to hear something different bask in the Wonderland that Insomniac always seems to beautifully create. Sticking to their credo and what they value as a company (in a $4 billion dollar industry) is a stroke of genius we think.

As Margaret Mead, once said  “Never doubt that a small group of thoughtful, committed citizens can change the world; indeed, it’s the only thing that ever has.” 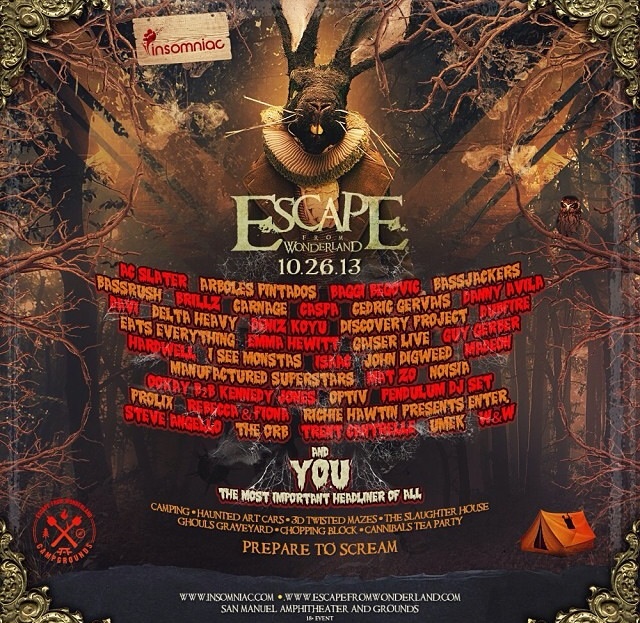 Win A PAIR OF TICKETS to... Benny Benassi at Sutra!