This past weekend I attended the second annual Project Z festival at the NOS Event Center in San Bernardino. Insomniac Events hardest and heaviest brands, Bassrush and Basscon, joined forces once again with its return this summer.

This year Project Z presented a three-stage experience and amazing lineup that thousands of headbangers were anxiously waiting for the day to come.

As I entered the venue, I saw so many people representing their favorite brand, labeling themselves as Team Bassrush or Team Basscon. Flags, totems, and outfits were inspired by both. I first walked by the smallest stage of the three, Area Z. I loved how the stage was set up, small but with a nice LED screen and a decent sound system. The vibe there was relaxed, lots of people were participating in flow arts there, others were laying in the grass enjoying the beats. The spot was a great place to hang out and chill while listening to music. 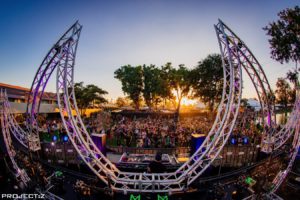 After I checked out Area Z I headed over to the Bassrush stage. The stage was under the megastructure filled with hanging LED screens from the top and a giant letter “Z” was displayed behind the DJ and the decks. I joined all the headbangers and watched Space Jesus throw down with his west coast bass beats. After his set I went to check out the Basscon stage, which was held in one of the buildings right across from the Bassrush stage. As soon as I entered the building, I felt the heat and humidity from the crowd, which took some time to adjust to. Each time I headed over to the Basscon stage I dreaded going inside because of how hot it was. I am glad that towards the end of the night the security ended up opening all the doors to let air inside. It felt so much better and made it more enjoyable to hangout in there. I wish that they would open the doors early in the night and not keep the doors shut all night. I headed to the front of the stage when I first got inside the building and watched Skellism bring the heat with their dubstep, trap, and hardstyle beats. What I liked about the Basscon stage was the giant LED screen which made for great visuals. I thought both stage designs were great but visually, the Basscon stage won my vote with its LED screens that portrayed its visuals rightfully.

Insomniac did a great job with the layout of the event. Everything was placed near each other, making it easy to go from each stage in a matter of minutes. I spent an equal amount of time at both Bassrush and Basscon stages throughout the night, being a fan of both, so I was pleased the distance between the stages were not far. I did notice there was a lack of art installations and headliner activities. The only thing they had set up was a string of lights (a staple at every event at the NOS) which the only disappointing aspect of the event.

Looking around the event, I noticed there were very little food options but there were enough alcoholic stands. Everywhere I looked there was a place to purchase drinks. I was pleased to see that the porta potties were kept clean, I’ve always encountered issues but that night they managed to keep them clean. Right next to the porta potties was the water station. I waited roughly ten minutes to get water and the line after I got my hydration pack filled grew in size. I only got water once but kept walking by the water station throughout the night and noticed the lines were always long. I looked on my map to see if there were other water stations open but that was the only one. I think there should’ve been one more water station open at the event to reduce the long wait.

My favorite sets of the night were Space Jesus and Eptic at the Bassrush stage and DJ Issac, Darren Styles and Endymion at the Basscon stage. Although I didn’t spend much time at Area Z, I enjoyed hanging out there and listening to a new artist in the beginning of the night.

Overall Project Z was a success and I had a great experience. The vibes throughout the night were great and every artist brought heavy bass and face-melting beats to the stages. I hope next year they have both Bassrush and Basscon stages out doors, or at least have more air-conditioning in the buildings or leave the doors open to let air in. I have my fingers crossed that Project Z returns next summer for more bone-rattling and neck breaking bass for bass-heads. 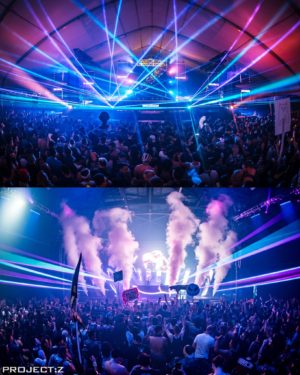 HARD and Gary Richards: What's Next?