Last year, ARC made history with its four-stage production, including the rowdy and colorful elrow experience and a carefully assembled lineup carefully full of house and techno artists.

This year, they don’t fall short of that legacy with names rooted in the Chicago scene that gave birth to house music like DJ Lady D, Mike Dunn, Derrick Carter, and Honey Dijon.

On the other hand, the fundamental techno sounds of Charlotte De Witte, Carl Cox, Joseph Capriati, and Richie Hawtin, will contribute to epic musical offerings as well.

We all know the internal battles conflicting set times can cause, so, here’s a guide to EDM Maniac’s must-see sets at ARC 2022.

Chicago house music legend, Mike Dunn, has over two decades of DJing and producing under his belt. The artist has released music through Nervous Records, Defected, and Tribal America, and has played alongside house innovators like Larry Heard, Ron Hardy, and Armando Gallop. With all this success, Dunn took matters into his own hands and founded his record label in 2019, Blackball Muzik.

Belgian artist, Charlotte De Witte, is a woman breaking boundaries in the industry and becoming a sought-out techno act. She’s won titles such as Best Techno Artist at the DJ Awards in 2019, been featured on the covers of MixMag and DJ Mag, and continues to gain respect in the global techno scene. De Witte also runs her own boutique label KNTXT, where she releases tracks and curates events and radio shows with a focus on sounds of purity, strength, and progression.

Chicago icon, Derrick Carter “plays parties, makes music, dances, sings, and really, really likes shoes,” according to his website. With the years’ worth of skills, parties, and fans to prove it, there’s no denying the artist lives up to that statement. As he began his journey, Carter was only a young teen in the scene. He became a staple in the ’90s era of Chicago house music and has been unstoppable since.

Up next, is a man that doesn’t need much of an introduction, but we’ll give you one anyway: British DJ and producer, Carl Cox. He gained the title of the king of Ibizia and continues to make history with his house and techno productions. He’s racked up 1.2 million monthly listeners on Spotify and plays for some of the largest music festivals like Tomorrowland, Electric Zoo, Mysteryland, Awakenings, and many more. Carl Cox also founded the rediscovered record label, Intec Digital.

Known as the meme queen and a techno machine, Hiroko Yamamura is a Chicago-based DJ who made a name for herself in the city’s techno scene. She is an artist whose gothic and dark personality ironically shines bright through her music, and connects with outsiders of the community. Carl Craigs Planet E, DJ Pierre’s Afro Acid, Jude Angelini All Out Army, are just a few of the labels that have shared her music.

Born in Kalamazoo, Michigan, and raised in Detroit, Seth Troxler is more than just a house music artist, but an art curator, restaurateur, and entrepreneur. He picked up the skill of DJing from his stepfather, who was then a college radio DJ, and by the age of 16 was working at the popular Detroit record store ‘Melodies & Memories.’

After growing out of his teens and making a debut at Panorama Bar, Troxler decided to move to Berlin, expanding his career and growth as an artist. He now plays all over the world at major events like Glastonbury, Movement, and Roskilde.

If you have the opportunity to see two legends share the stage, take it. The creator of Drumcode, Adam Beyer, joins forces with Eric Prydz, who is known for his 3D visuals and multiple aliases, for the project, Adam Beyer □ Cirez D.

The two are Swedish artists, paving the way for techno and house newcomers. Adam Beyer’s Drumcode has been a unique platform for techno stars for over 20 years, and Eric Prydz is father to Pryda Recordings and innovator of “The Pryda snare.” A popular snare technique in house and trance music.

Chicago is home to house music and some of the most classic artists, and Honey Dijon doesn’t fall far from that. She picked up the craft at a young age and began dropping the needle at her parents’ basement parties.

Soon after, Dijon met Derrick Carter, building not only a friendship but gaining a mentor. Apart from her genre-mixing music production, the trans artist is vocal about issues surrounding gender in club culture and has appeared on popular platforms such as Red Bull Music’ Fireside Chat.

Eats Everything fosters two labels, Edible and EI8HT. The first label, Edible, puts out top-quality house music, across the board, from artists like Catz ‘n Dogz, Waze & Odyssey, and Melé. On the other hand, EI8HT takes the fundamentals of techno and mixes it with deep elements and grooves.

Skream, a UK phenomenon, started off as an innovator for dubstep at the early age of 15. After gaining the recognition he rightfully earned, he decided to transition into house, disco, and techno, becoming a success and doing open-to-close sets. He now runs Of Unsound Mind and has made it its mission to offer an outlet to friends and support the underdogs.

Joseph Capriati is an italian DJ producing hard-hitting and slick house and techno for over a decade. He’s worked with labels like Richie Hawtin’s Plus 8, Chris Liebing’s CLR, and Adam Beyer’s Drumcode.

Capriati’s touring schedule has racked up to 150 shows yearly, keeping him at the top of requested artists.  His drive to present each set with a smile and a good ear for sonic soundscapes makes his music much more infectious.

Check out the full ARC Music Festival lineup below: 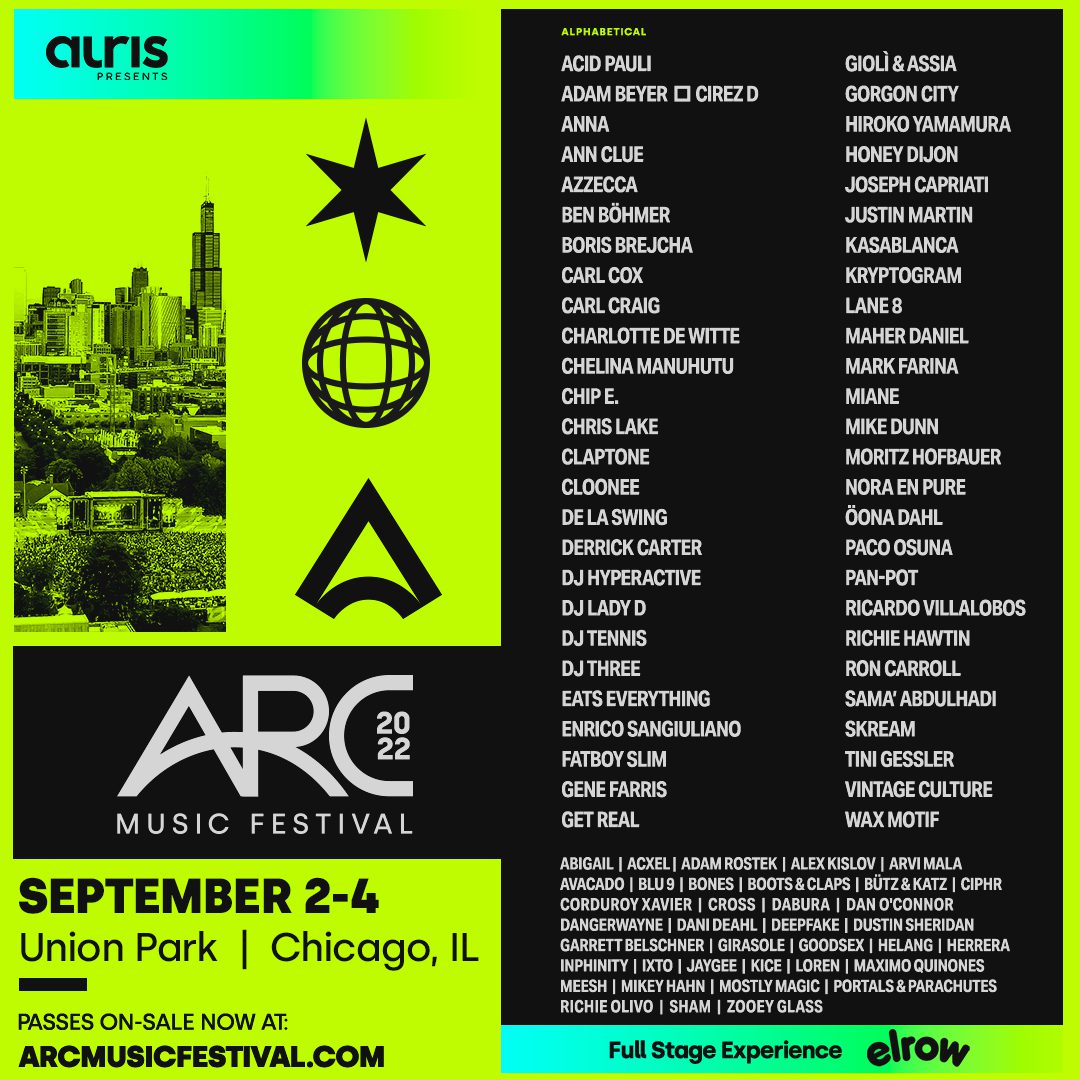