OMFG! NYE proved to be one of the places to be for New Year’s Eve 2022. Everyone was excited and so happy to be there. The beloved LED event made its return to the Pechanga Stadium in San Diego and did not disappoint the celebration.

The two-day festival proved to be worthwhile with its packed lineup and surprise performances like Skrillex performing alongside SD native,  ISOxo. The sets were better than ever with the energy from the stage to the people dancing, it was a perfect ending to 2022. 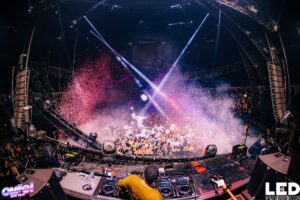 Many attendees were very dedicated fans of artists- such as Gryffin, Said the Sky and Porter Robinson. The crowd was a mix of older and younger people together under one stage. People were friendly, the energy was high throughout the sets, and people were spreading the P.L.U.R vibes with one another.

We saw people fanning one another, mingling, and dancing together. The space in the pit was not too crowded, and the energy in the stands was undeniable. No one was pushing or shoving in the pit, and we didn’t hear about any inappropriate touching or grabbing like in previous festivals.

People went all out for their outfits despite the pouring rain outside the venue! We saw many rave fams with matching jerseys, onesies, and creative costumes. 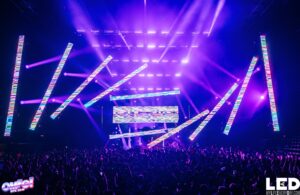 OMFG! NYE took place at the Pechanga Arena in San Diego, which had one main stage with a pit area and an upper seating area. The production was simple but LED made it work with the smaller and intimate venue.

Throughout the whole show, there were amazing lasers, smoke machines, and pyrotechnics which varied from DJ to DJ. Although they had all of these things, there were no performers, dancers, or stand-out photo-ops in the venue.

OMFG NYE is famous for its light-up glow sticks, which they hand out for free at each door when you enter the venue. These add such a fun vibe to the crowd. They also had happy-faced inflatable balls which they dropped from the ceiling

OMFG! NYE had a great variety of genres which brought dubstep, melodic bass, house, and trap to San Diego under one main stage. All artists brought their individuality and energy onto the stage, beginning with the openers all the way to the closing DJs.

It was great to see representation for female DJs with Jessica Audiffred and Tsu Nami performing. JSTJR was one of the most fun sets of the night, bringing the booty-shaking vibes to the dancefloor. Gryffin brought us all into the New Year with his performance playing  “Nobody Compares to You” during the countdown at midnight.

The crowd was shocked when Skrillex came out to surprise everyone during ISOxo’s set, and they even played some unreleased music together.

Although everyone was excited to see Skrillex, it was a bummer to hear that RL Grime could not make it to San Diego to perform his closing set due to circumstances beyond his control. Regardless, everyone loved each artist and the sets were truly captivating for New Years. 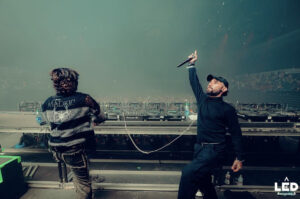 OMFG! NYE was indoors at the Pechanga arena in San Diego. This year, the weather in a majority of Southern California was predicted to be rainy and stormy over the weekend. Having the advantage of an indoor venue meant attendees could escape the rain and stay warm.

The wait to get into the venue was simple and fast with different security points located in 4 entries to the stadium. Once you got into the venue, there was a wrap-around hallway with merchandise being sold, alcohol stands, food, and restrooms.

There was a large walkway on the floor around the pit, so there was lots of space to walk around if you wanted to get to the other side. You didn’t have to walk through a crowd or all the way back up to the stadium.

Although there were many pros, the layout of the venue and only having one stage was simple. But, the LED Presents team made everything work amazingly in favor of the space they had.

OMFG! NYE had high energy from artists and attendees throughout both nights. The vibes were immaculate and everyone was excited for the stacked lineup. Everyone was dancing and singing along to songs whether they knew them or not, and the crowd was not pushy, compared to other festivals. The artists truly put on such an amazing show and captured the moment of celebrating for the new year to come.

With the rainy and cold weather outside, this indoor venue provided a dry and warm place for attendees to dance the night away.  It was undeniable that people were having a great time and the P.L.U.R vibes were being spread throughout the arena. We saw people exchanging kandi and feeling happy to share New Year’s Eve with one another.

All photos provided by LED Presents

Porter Robinson Will Wrap Up 'Nurture' Tour In The U.S. At Coachella 2023