Disco Donnie has revealed the final artists for Freakazoid Robots’ inaugural event, which is scheduled to take place over Labor Day Weekend in El Paso, Texas on Saturday, September 4, and Sunday, September 5. Freakazoid Robots’ premiere event will feature a tremendous list of artists throughout the entire weekend. Artists billed for the two-day lineup include Adventure Club, Alesso, ATLiens, Boogie T B2B Dirty Moneky, Drezo, Gryffin (DJ Set), Jauz, Joyryde, Kayzo, Lane 8, Riot Ten, Seth Troxler, Shiba San, and a long list of others that can be viewed via the image below.

Freakazoid Robots’ initial lineup was revealed a couple of weeks ago but did not include MSTRKRFT, Seth Troxler, CID, and others. The festival will feature three stages, with one of the stages focusing solely on techno. Freakazoid Robots is the second festival to be thrown by Disco Donnie Presents, and the second large-scale music festival the company has thrown in the past two months. 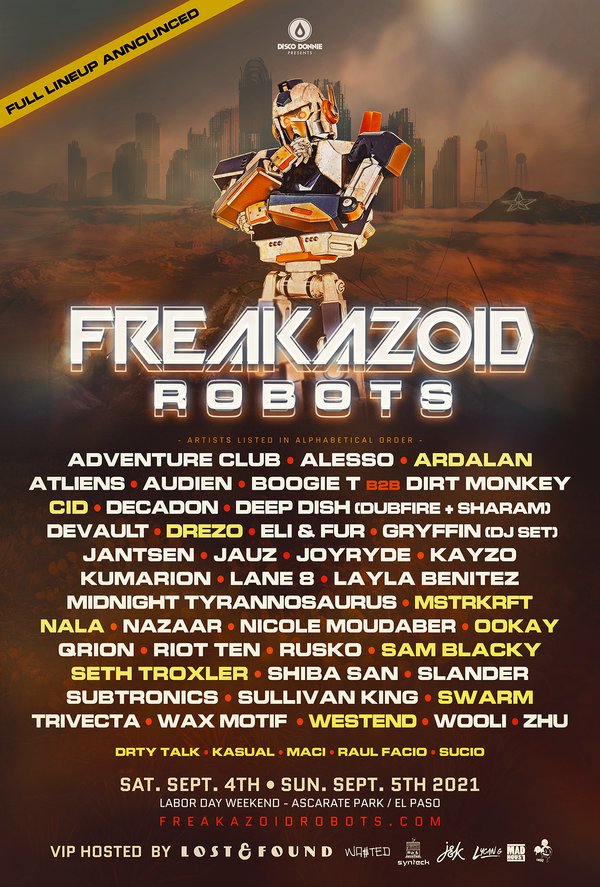 Fabric Is Enforcing A Strict 'No Photo, No Video' Policy

Primavera Sound Los Angeles Has Been Rescheduled To 2022