Last year we experienced Groove Cruise for the first time and called it the wildest party of the year. This year, we decided to take some EDM Maniac Groove Cruise “virgins” on the ship for their first time. We told them this was the most insane party ever, and once again, it totally lived up to the hype.

This is their story.

Our bags were packed and we hit the road to Long Beach on Friday morning. We arrived to a very excited crowd of Groove Cruisers – you could feel the energy in the air. Once we got through the somewhat intense security, we boarded the boat and walked into the massive atrium. We then got our first drinks of the trip and even met Lady Casa (Michelle) at the bar.

From there, we met up with our entire crew on the pool deck and continued to drink. Bottles were popped, drinks were consumed and the turn up had begun! The music was already blasting, people were dancing and the drinks were flowing. The entire Groove Cruise had already starting partying before we even left the port. Paul Oakenfold was at the pool bar starting to pregame himself. 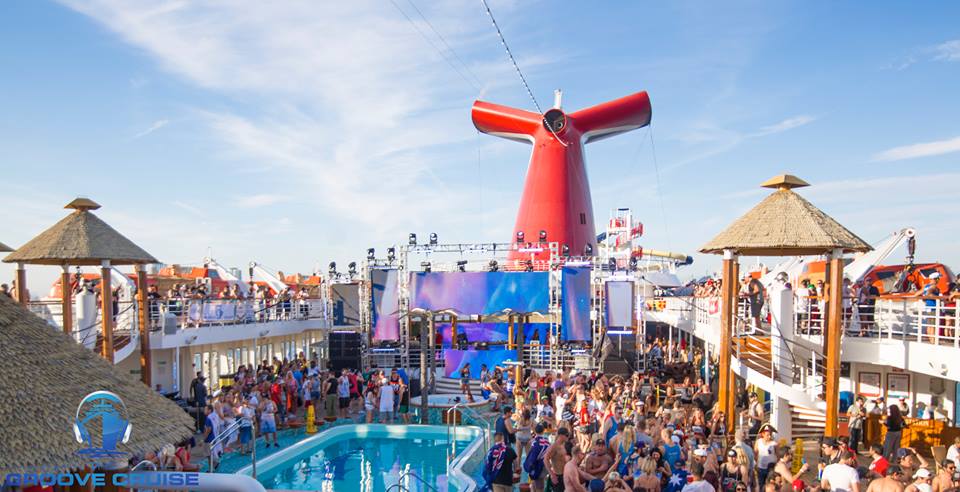 We arrived at our room and it was more spacious than we had imagines. It was bigger than a dorm room and had 3 beds, 3 closets and a bathroom. We only spent a few hours in the room the entire weekend. It more or less was a glorified changing room. So don’t think that you need to ball out on a suite, as you probably won’t be there much.

Our bottles we had pre-purchased were there and waiting for us when we arrived which was fantastic. It was time for more drinks! We spent less than 10 hours in the room, as some days we didn’t sleep. Our room was located on Deck 5, which was awesome! Everyone was very friendly on our floor making it easy to meet new people. Two of my friends were celebrating their birthdays on the ship, and birthday cakes were left for each in their rooms. First up was the ship’s muster drill which everyone is required to attend. Talk about a drunken mess of cruisers attempting to learn how to survive in case of an emergency! After the muster drill, we headed down to the Candlelight lounge for a special VIP reception, which included open bar and a warm up set from the one and only Kristina Sky.

The theme parties on Friday were “Represent” and “50 Shades of Disney.” We wore our Los Angeles / California gear during the day, and we got kinky at night.

Our crew decided to be characters from Winnie the Pooh. We had Pooh, Piglet, Christopher Robin, Tigger, Eeyore and Rabbit. My friend Carinne went rogue and was Ariel from The Little Mermaid. We ran wild around the ship, bouncing from stage to stage. Ferry Corsten and Darude kept us dancing in theatre and both had great sets! From there, we headed down the Abyss to the sounds of Kevin Saunderson. The Abyss were the after-hours deep-house/techno sunrise sets on the pool decks. We headed back to our rooms before the sun came up so we could try and “sleep” for a few hours. 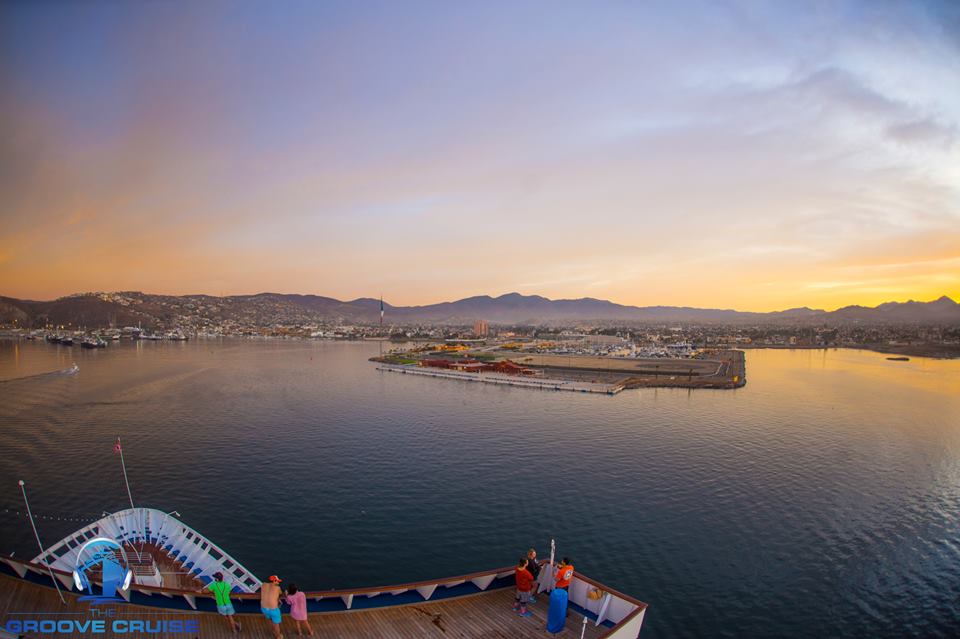 Instead, we rested for an hour or so and then got back up to keep the party going.

We headed back to the pool deck around 8am and started drinking and dancing. The pool deck was unsurprisingly packed! People were still up partying. We were told Groove Cruise was a 72 hour non-stop party and it was becoming very obvious that it was certainly non-stop.

The following day’s theme was Naughty Nautical day – so we came dressed in our sailor outfits. Vinai and Le Youth were going to get the party going over on Catalina Island. Our group decided to stay on the ship and we had a wild time taking over the empty waterpark. There is nothing quite like having an entire cruise ship practically to yourself to run around on! Mid-afternoon saw us hungry and ready for a snack. Not to worry, there were free buffets just a few feet from the pool deck stage which made it easy to stay nourished while continuing to party. In the evening, we changed into our Neon Candyland outfits and headed to the theatre. Kyau & Albert and Kristina Sky took us to trance heaven!

I was really impressed by Kristina Sky’s set, and everyone was going wild inside the theatre. She took us on a journey that won’t soon be forgotten. We then headed back to our rooms to change into our after-hour outfits. We danced into the early morning to the sounds of Anthony Attalla and Cocodrills on the pool deck. I had been waiting to hear Anthony Attalla and he didn’t disappoint. The LED screens, lasers and lights made for a magical morning! The Groove Cruise completely revamped the ship and made it feel like a festival.

We then headed back to our rooms to “reset” ourselves and change into our final outfits of the weekend. “DTF” or Down to Fiesta was the theme for Sunday, and “Halloween on the High Seas” was the theme for the evening. 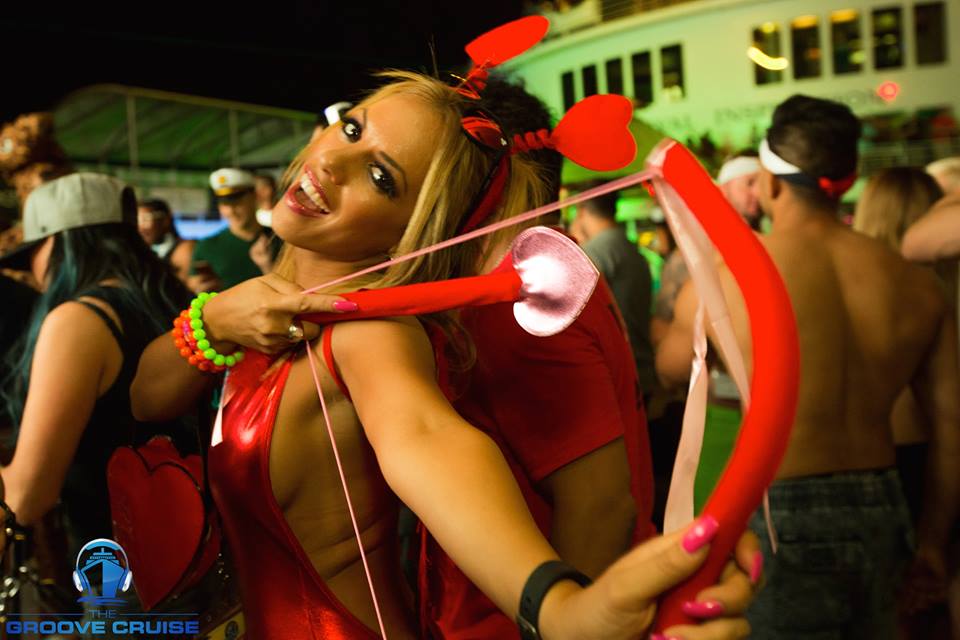 Most of our group stayed on the ship and didn’t attend the big party at Papas and Beer. I heard DVBBS put on a wild show! We opted to keep dancing and drinking on board and heard some great sets and made some new friends. After grabbing some lunch, we relaxed by the pool until changing into our Halloween costumes. Up next was DJ Scooter’s hip-hop set. DJ Scooter had the crowd moving and grinding to an unstoppable medley of the greatest hits of hip-hop! He also got us giggling and dancing the afternoon before with a bang up remix of “If You Like Pina Coladas!” Only on Groove Cruise does this happen.

Our group spent the evening in the theatre as we wanted to see Dirty South. We got there early and heard an explosive set by Sandro Silva. It was WILD!!!! Dirty South then brought his A-game with a set that had everyone dancing – even the jellyfish! LED suited performers sprang to life and wowed the crowd as jellyfish bobbed over head. The theater stage was like an insane fish bowl delivered to Earth from outer space. This was one hell of a wild party! Lasers and lights bounced around as attendees danced on tables and bounced on couches to Dirty South’s driving beats. Up next was the closing sets of Incorrect Afterhours. This had been the place to be all weekend and the closing night didn’t fail to deliver! Guy Gerber took us on a deep journey until the early hours of the morning when the final beat played.

Looking back, I must say there is no party like Groove Cruise. We called this the wildest party of the year last year and this year we would have to say the same again. The attendees were all amazing in their own way. Whether you were a college kid in his 20’s or an established professional in your 40s, everyone was there to party. There was no discussion of jobs or real life, just of having fun. This was one alternate reality no one wanted to leave! New friends were made. New limits were pushed. 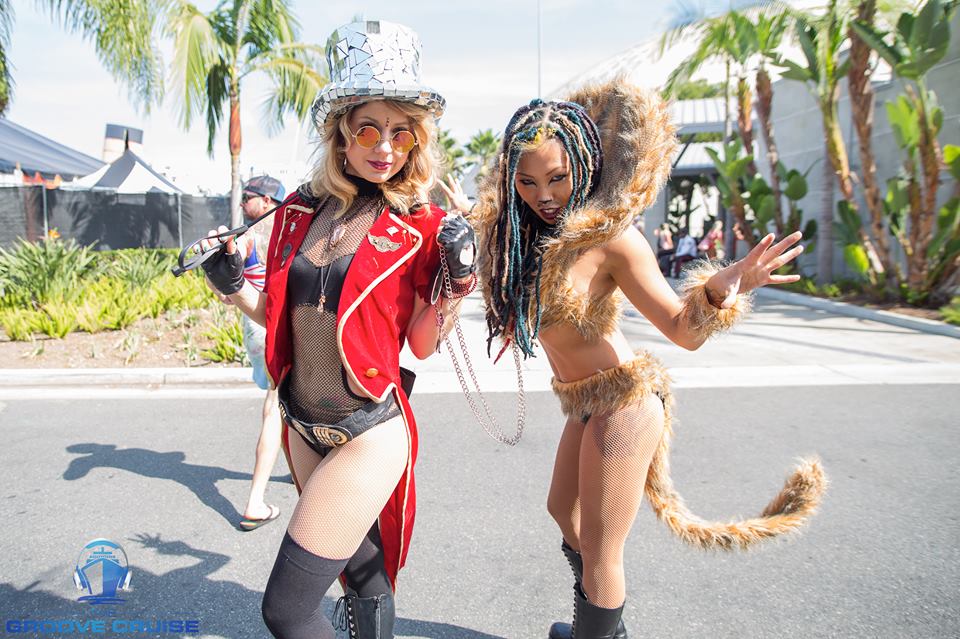 This boat is not for the faint of heart or for the novice party goer. This boat demands you give it your all and you surrender happily. You party for 72 hours and you do not stop. There is no sleeping on Groove Cruise and people party as if it’s their last day on earth. Trust us. If you’re looking at festival cruises, this is the one. The average age is well over 27 and you won’t be surrounded by the usual EDM crowd.

DJ’s could be seen everywhere and you could have lunch and drinks with them! Talk about a unique experience you just can’t get at other festivals. Costume themes make the voyage even more exciting as almost all the attendees bring their A-game every single day. I know we did!

We will definitely be back next year and every year after that. Thank you to Whet Travel and the entire team on Groove Cruise for making this the most memorable and magical party we’ve even been on! We’re slowly starting to recover and are still finding glitter in our hair. We are so glad to be a part of this experience and the Groove Cruise family. 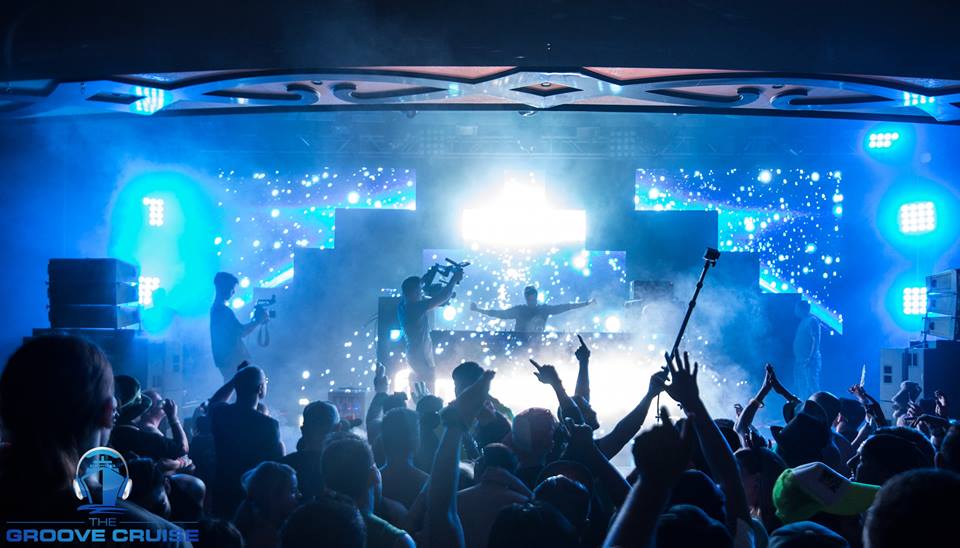 Groove Cruise sails to Miami next January to the island of Jamaica. Staterooms are on sale now and MASSIVE headliners Dash Berlin, Bingo Players, Markus Schuz and Dada Life have already been announced. Save on your staterooms with the code EDMMANIAC.

Think you know how to party? Think again. Test your limits, find new friends and experience the trip of a lifetime. We can promise you this: there’s nothing in this world like Groove Cruise. Until next year!

Escape: Psycho Circus is in Town