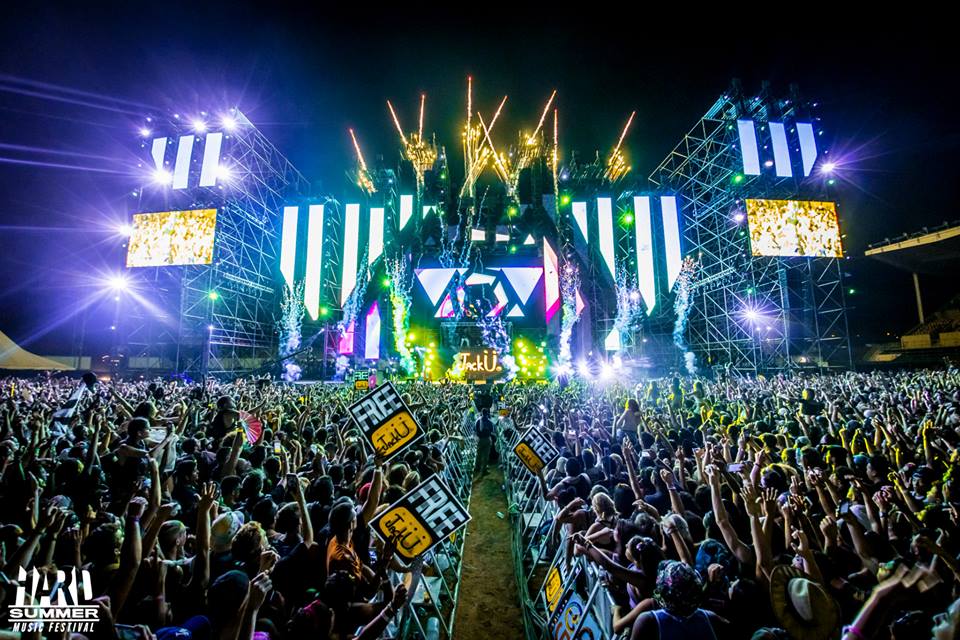 HARD Summer 2015 was nothing short of an amazing dance crazed and sweat infused weekend. Featuring a sold out edition with over 60,000 people in attendance, HARD mastermind and CEO, Gary Richards (aka DESTRUCTO) put on what felt like a mature music festival with a hint of grittiness. We love grittiness.

Staying true to its roots, HARD Summer’s lineup was dominantly focused on electronic music but didn’t shy away from acts like The Weeknd, Fetty Wap, DJ Mustard, and Schoolboy Q.

Let me not forget about the notorious LA food trucks and carnival rides scattered all across the festival grounds. It was much like a music based wonderland and no matter what you needed HARD had you covered. Food, beats, friends, fun, you name it and HARD had it.

I stormed in at about 2pm on Saturday afternoon determined to catch Mija’s set. As I was walking in and getting a feel for the festival’s vibes, I was immediately captivated by melancholic beats frolicking from the HARDER stage. It was Matoma behind the decks and he was taking everyone on a Tropical four on the floor beat journey. Despite the scorching sun being in full effect everyone was dancing like there was no tomorrow.

After some groovy tropical jamming, I continued my escapade to the green tent for Mija and literally danced my way to the front of the stage. It was 2:35pm and Mija had the place packed! It was unbelievable to see everyone raging so hard so early in the day. The most notable moment was when she dropped Valentino Khan’s Deep Down Low and actually had everyone getting deep down low. The sardine packed and sweat rain stage was going off and there was no stopping it.

It was only last year that Tchami was playing a small tent at HARD. This year he landed a spot on the HARD stage ready to blow everyone away with his futuristic sounds. Standing at the fore-front of the Future House scene, it is evident why Tchami exploded the way he did. His curated set was quote on quote fire from beginning to end. There is something about Future House chords that resonate within you in a live setting and Tchami took full advantage of that. With the help of the grand production featuring a gigantic wall of visuals that floated across the stage, his set was truly an epic one. Queue the opening and closing Hi-Hat.

I do want to point out the fact that I heard Jauz’s Feel The Volume so many times over the span of this weekend. You know you have made it if every DJ at the main stage is dropping one of your tracks. It became a little ridiculous at some point but the reality of the situation is nevertheless amazing. Sam said it himself that last year he couldn’t even afford a GA ticket so his girlfriend had to buy it for him and this year he played the main (HARD) stage. That my friends is seriously un fucking real.

My squad forced me to join them for The Weeknd and I’m so glad they did. He had the swiftest dance moves I had seen all day long and a solid band to back him as he strutted his stuff all across the stage. It’s nearly impossible to miss him with his skyscraper like haircut and angelic voice. It was obvious he wanted to vibe with the crowd before dropping his more known stuff. As a wave of herbal essences washed over the crowd he caught a whiff and asked everyone to spark one for him. “I can’t feel my face when I with you” after so much second hand smoke I couldn’t feel my face either but it was the greatest feeling ever.

Never have I seen an artist engage with a crowd so effortlessly. He could’ve had an ace performance with his eyes closed. This guy is the real deal and since seeing him dominate the HARDER stage it is safe to say I have hopped onto The Weeknd’s bandwagon.

Bet you didn’t know The Weeknd could get 20,000 people to jump at once to a song about having sex. It’s definitely one of those things you have to see to believe but man was it awesome.

The one set that really stood out based on hype, crowd draw, production, and excitement was Jack U. You know, Skrillex and Diplo. But what’s new? Seeing as Jack U plays massive festivals on a highly frequent basis, I can imagine that at this point having a crowd go ape shit for the entirety of their set comes second nature to them.

Aside from Porter Robinson who legitimately told a story and took you on one hell of a journey throughout his set with his visuals, Jack U had some of the best visuals I saw all weekend. My favorite was the colorful Jack U logo tiled all across the screens that flooded your peripherals with Jack U extremity.

Shortly after an explosion of Hardstyle madness and Trap driven beats, 2 Chainz joined them on stage and took the performance from 0 to 100 in the hood real quick. With the notoriety Jack U has achieved they are expected to bring a well thought out production and that they did.

After a brief hood moment, it was no surprise that they brought out the Biebs to join them on stage. You know, Justin Bieber. Duh! Never in my festival life (going on 9 years now) have I seen a crowd push so hard and fast to get as close to the stage as possible like that of Jack U’s when Bieber set foot on that stage. It was pretty rad to see the Biebs bust out a quick moonwalk and some finely choreographed dance moves as Diplo and Skrillex serenaded us all with Where Are You Now. Shortly after the chorus hit (or the DROP dropped?) fireworks start erupting from behind the stage and there is now 2 shows to entertain HARD summer.

It was truly the perfect way to end 2 days of HARD madness. What were some of your favorite acts at HARD Summer? Let me know your thoughts in the comments down below!