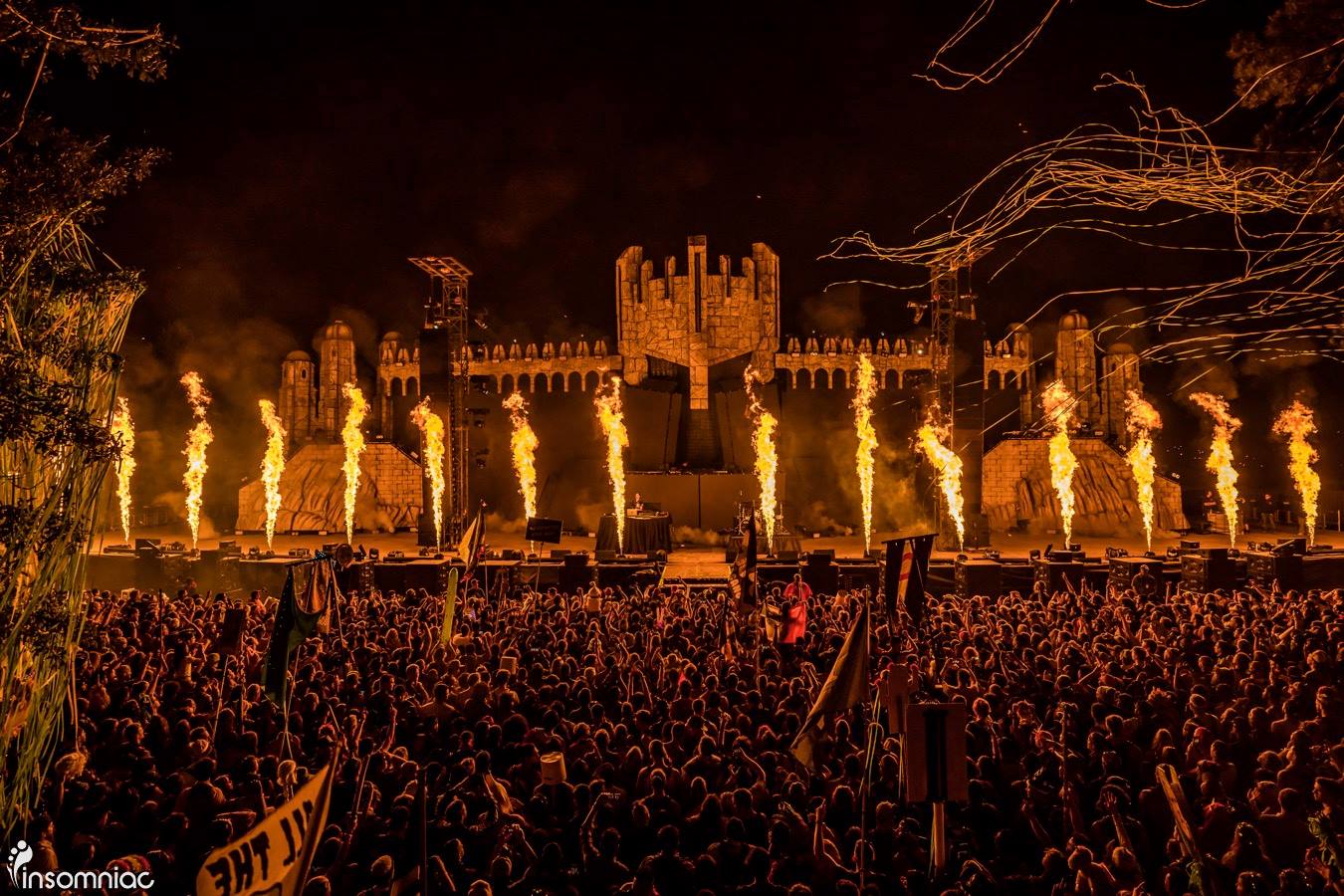 Imagine walking back in time to a small village in a tiny kingdom in the late 1500’s. There are adorable fairies, knights in shining armor, scary goblins, swashbuckling pirates, terrifying dragons, and four towering castles in constant battle to win over the town’s people. Only instead of fighting the battle with swords and arrows, they fight for the love of their subjects with sick beats and deep bass drops. This was the scene of the first ever renaissance-themed music festival Middlelands as Insomniac brought in 150 artists on 5 stages over the course of 4 days. Middlelands drew in people from all over the country bringing in an astounding 66,000 attendees with many of those people attending their first ever festival!

The King and his royal court.

Middlelands is set up in the quaint town of Todd Mission, TX where they hold the Texas Renaissance Festival (T.R.F.) every year. It is a 55 acre city built and dedicated solely to the renaissance era that brings in over 500,000 attendees over 8 weekends every year. They even have over 20 acres of campgrounds. The city has 17 stages set up that house hundreds of acts every year.  The city even has its own king who is also the legitimate mayor of Todd Mission, King George Coulam! Combine an entire city dedicated to festivals with Insomniac’s careful and thoughtful planning makes for one of the best music festivals I have seen in a very long time. One source told me that the entire Middlelands festival grounds used less than 20% of the city and less than half of the campgrounds! 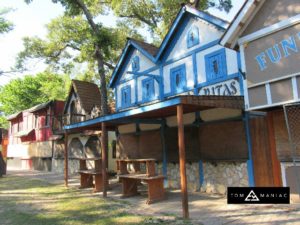 Some of the unused buildings of the Texas Renaissance Festival.

The party starts the second you arrive at the campgrounds as people are jamming out and setting up their various campsites. Camping festivals are known for keeping the party going into the wee hours of the morning, but Insomniac one upped it this time by bringing in the Knightowl After Hours stage for the pre-party and all the sound camps. The “Call of Booty” camp is pirate themed camp that is a cornerstone of the T.R.F. camping experience hosting after parties and bonfires every weekend of the Renaissance Festival in October and November. They were hired by the Insomniac team to not only roam the festival in full pirate gear, but to also the host the biggest sound camp of the weekend to keep the party going until after 4 a.m. every night. Big names such as 12th Planet, Griz, Snails, and Space Jesus graced the decks of several of the sound camps over the course of the weekend. 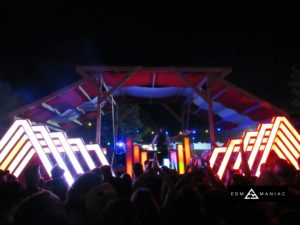 From the premier camping options to the VIP amenities, Insomniac didn’t spare a single penny when it came providing the best service possible for their attendees. Every detail was meticulously thought out from spraying the dirt roads with water to keep the dust down, to the constant cleaning of the porta-potties and restrooms. They offered many day-time activities for their campers from archery tag to an entire slack line village. They had an arts and crafts tent set up with a flower crown making station, kandi making table complete with perlers, and even a station where you could make your own tie-dye shirt and bandana. There were many night-time activities including the nightly bonfire and sound camps, but one of my personal favorites was the Enchanted Forest right next to the group camping. 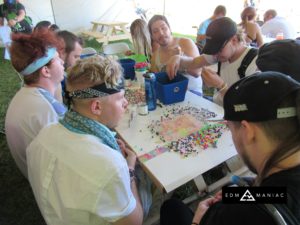 As you walk up to the gates you are instantly transported to the days of yore with a bustling village square filled with juggling jesters, minstrels playing the lute, and performers in all types of medieval inspired costumes. They have a stage set up right as you walk in that showcases many different renaissance themed shows and improv comedy acts throughout the whole night. There are merchants sprawled all over the streets selling a whole variety of different wares from all over. No matter what you are craving, the food vendors there got you covered with traditional renaissance themed foods like giant turkey legs to more conventional options like burgers and fries. As you continue to wander through the festival grounds, you come across all sorts of rides and games for you to play at your leisure, including a miniature jousting ride. 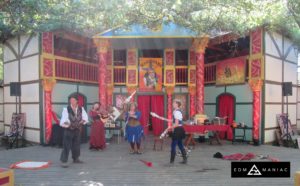 Some of the Renaissance Fair performers juggling on stage right as you walk through the gates.

When you continue through the festival grounds, you come across one of the smaller stages of Trinity Vale. While it was the smallest of the four castles, it still hosted big name artists like AC Slater and J. Philp. The further you walk, you come across the Middlelands Arena. As you walk into the Middlelands Arena the first thing you notice is the towering castle, and you soon realized that you are in a full on arena surrounded by lasers and lights from all sides. Those who were fortunate enough to have been in the Arena on Friday night during Gramatik’s closing set, were graced with a very special performance when they brought out Griz and Big Gigantic for a surprise Big Grizmatik collab for several songs. The Middlelands Arena hosted many other heavy hitters including Ephwurd, Seven Lions, and Snails. On your way to the main stage you run into The Stronghold stage that housed many of the bass heavy artists like Crizzly, Datsik, and NGHTMRE. Once you finally cross the bridge to the main stage Castle Northwoods, you are taken to another realm filled with trees and wonderful delights as far as the eye can see. As you look up at the largest of the four castles, you see not only an enormous castle looming overhead, but also a giant medieval knight’s helmet. Castle Northwoods was the home of some of the biggest name headliners of the weekend including Bassnectar, Galantis, Kaskade, Major Lazer, Marshmello, and Zhu. 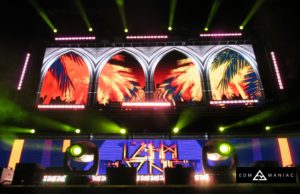 12th Planet playing at the bass heavy stage: The Stronghold.

The whole weekend everybody kept asking me, “Who are you most excited to see?” To which I would reply every time with, “My all-time favorite headliner is here at Middlelands… You!” I go music festivals for the crowds of people spreading love and good vibes to everyone they come across. I love how everyone can fully express their true selves with their costumes. All the flow artists put a lot of dedication into their art to create a beautiful show for others. I love all the kandi kids and the time they put into making their kandi. Middlelands had all that and then some! 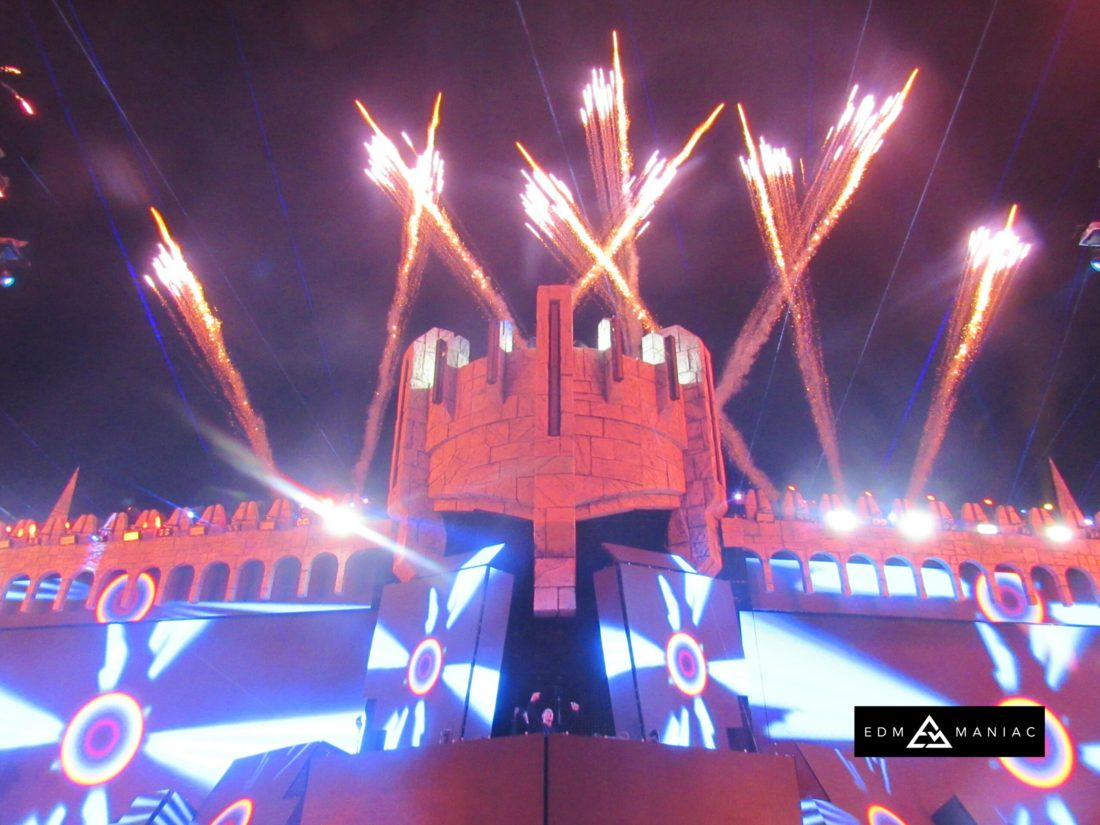 Kaskade’s closing song right before the King & Queen came out to say goodbye and thank you to everyone.

All that combined with the Gothic architecture, the massive stages with lights, lasers, and pyrotechnics, the camping with strangers who became family by the last day, the southern hospitality, the absolutely amazing vibes of everyone there, the extremely well thought out layout of the grounds, the friendly medical staff ready at a moment’s notice, the friendly Ground Control crew and security staff made for one of the best festivals I have EVER attended. I have been to many different festivals and I have learned one thing: Yes it’s the music that brings us together, but it’s the bonds that we make there at the festival that connect us for life.

All the camping neighbors that became Family. A big thank you to Insomniac and Middlelands for bringing all of us together in such a wonderful environment!