JVNA, the multi-talented musician, struck gold again with her debut album “Hope In Chaos”. EDM Maniac was lucky enough to get an exclusive interview with her to take a deep dive into inspiration, emotion, and how the album came to be. JVNA’s new album features a variety of feelings and styles. Her beautiful vocals and seamless piano playing elevate her tracks to new levels. The melodies in each song seem to be crafted to take the listener on an internal journey; one they must face alone. JVNA is undoubtedly one of the industry’s most promising rising stars and this album proves it. Her incredible story and artistic music stylings are two things you cannot miss.

EDM Maniac: There is a lot of buzz and excitement surrounding you right now as you are releasing your debut album “Hope In Chaos”. Tell me about this project and how it came to be.

JVNA: I’ve always wanted to be an album artist. I think albums are really special in the way where you can tell a story visually with its branding, placing specific tracks in certain areas, having hidden messages whether it’s in your interludes, intros, outros, and the ability to create a grand experience for the listener. I started writing these songs in late 2019 and had hoped to put out a finished album by mid-2020. However, the pandemic hit, and I thought ‘oh okay, well I get some more time to work on these songs instead of rushing the process. I think it was a blessing in disguise because over the pandemic I opened myself up to new genres and developed my vocal style more. I feel like this was the right timing for me to learn more as an artist and put those influences into this album.

EDM Maniac: What are the things that inspired you when you were creating this album?

JVNA: Throughout the creation of the album, I was inspired to be an artist who can create any genre but still have their signature sound carry over. Over the course of writing this in 2020, I started listening to more genres outside of my usual future bass. I made various DJ sets on my youtube channel for genres like Psy-trance, and drum n bass.

I’ve always been scared to try out different genres because I felt like I didn’t want to experiment too much and stay on the safe side of doing what I’ve already been doing. But I couldn’t hold myself back from restricting any creativity so I thought “eff this. I’m going to put out a Psy-trance song and I’ll even make a drum n bass song”. “Bullseye” is my Psy-trance track and “True Colors” is my Drum n Bass track on the album. “Sins” leans more Nu-Wave and Trap for me personally. The rest of the album stays in my typical future bass/pop sound that my fans are familiar with but with new influences of rock and cinematic elements.

EDM Maniac: This album has a lot of styles and feels to it along with your incredible vocals. What does your writing process look like when it comes to music? And which comes first; the tune or the lyrics?

JVNA: My writing process usually comes from the tune and melody first. Sometimes I will be on Ableton just messing around with some synth patches and I’ll get inspired to write for a certain mood or theme. I studied film scoring in college so my writing process usually comes from me describing a certain scene or emotion visually. Sometimes I’ll also just sit down on a piano and hum with different chords till I get a vibe that I feel so strongly about that I just need to record it on my phone immediately. The lyrics usually come after. I like to write topics not just about love, but about personal ambition, overcoming hardships, and personal tales that have happened in my life.

EDM Maniac: When you listen to your album, what are the emotions and feelings that it conjures up for you? Which song do you think has the most emotion and power behind it?

JVNA: When I listen to ‘Hope in Chaos’, I literally feel hope within chaos haha. This album is written about a time of instability where I was going through so many rapid changes at once – breakups, the death of my father, graduating from college and entering the entertainment industry. I’m now at a pretty mentally stable part of my life and in a way, writing this album is my way of processing my journey to adulthood.

The song that has the most emotion behind it is probably my song “18”. This song is about the dangerous box of impurities that come with turning 18. You are immediately legally able to be sexualized by others. My lyrics ‘will you cut your face just to be pretty?’ is about the plastic surgery industry and the unrealistic beauty standards that many young women like myself have wanted to attain. ‘You say I want to be naughty’ is a really direct line about the cringe messages I’ve gotten in my DMs as a high schooler from older men. It is an overall song about how I felt transitioning into adulthood as a woman and also a turning point in the album.

EDM Maniac: Would you say this album has an overall theme or message?

JVNA: The overall theme of this album is the story of Pandora’s Box. The Greek tale follows the goddess Pandora who opens a forbidden box out of her own curiosity, thus unleashing chaos, diseases, and sins into the universe. The one thing that was left behind was hope. This album is about reaching into the unknown, fighting chaos against all odds, and seeing the light at the end of the tunnel.

EDM Maniac: Your debut album, “Hope In Chaos”, has an interesting layout to the tracklist. Is there a reason or meaning behind this?

JVNA: I staged my tracklist in a similar fashion to the stages of Grief. In the first song “Chaos (Prelude)” my last spoken lyric says “I’ll soar among the chaos”. That is why the last song of the album is called “Fly”. The songs “Where You Are”, and “Ghost” are songs about breakups and wanting them back in your life. “Breakdown” and “Sins” are angry songs dwelling on the situations that have happened. “18” is about my female story. “Bullseye” is taking action and reaching for ambition to turn your life around. “Hope” is the interlude from the emotions of Chaos to Hope. From here on, the album becomes more hopeful and bright. “At least It was Fun” and “Dystopia” are songs about accepting your past, and current conditions. “True Colors” and “Fly” are about happiness and resolve. 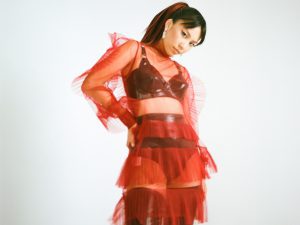 EDM Maniac: Every artist has a story about how they got to where they are. Take me back to the beginning for you, how did you get your start in music?

JVNA: I got my start in music with classical piano lessons from the age of 6. I started learning how to write and produce when I was 10 years old. My first DAW was Reason Propellerhead. I had a really cool Jazz based teacher who taught me how to produce genres like RnB and Pop. I wanted to pursue film scoring when I was in college so I attended the San Francisco Conservatory of Music to study composition. Then I went to college raves and said “haha nevermind I’m gonna be a DJ”

EDM Maniac: Looking at your beginnings to where you are now, did you ever envision yourself getting to the point you are at? What are some of the best memories that your music career has helped to create?

JVNA: I’ve always known that I was going to make music. There has never been anything else I wanted to do in the world. I knew that as long as I didn’t give up and kept working hard, the universe would let it happen. If not on the moon, but at least among the stars. The best memories are the free shows I would play to a crowd of five people (two of them being my friends). The moment I was even able to play to a crowd of 500 people, I was so shook that it really was happening.

EDM Maniac: Can you hint at any possible upcoming shows or tours where people can hear “Hope In Chaos” live?

JVNA: I am doing a US tour run in early 2022! This tour will be brand new with the album, new visuals, live vocal performances, and keyboard playing. Tickets at jvnamusic.com/tour 🙂

EDM Maniac: Lastly, what is some advice for young musicians who are in the same place you were once in?

JVNA: I would tell them that in order to do music nowadays, it’s not just about the music. You have to be good at running your own business. In the beginning stage of pursuing this career, you wear many different hats. You are your own website designer, photographer, video editor, merch designer, agent, manager, creative director, etc. It is honestly such a fun process to do all of this, so don’t be intimidated and have fun!

Where To Find More

JVNA’s “Hope In Chaos” is an instant classic; blending genres and conjuring emotions from deep within the listener. This album will find a way deep into your mind. With just one listen and you will be hooked. You can find her debut album on SoundCloud, Spotify, and anywhere else you might get your tunes. Check out JVNA’s tour to see if she will be playing in a city near you! And be sure to follow her on Instagram and Twitter for the latest updates on music, concerts, and all things JVNA.

Full Sends Only: Get Ready For Hijinx Festival 2021