The three-day EDC held at the Las Vegas Motor Speedway in June 2013 pumped an estimated $278 million into the Clark County economy, according to an economic impact report released today by Beacon Economics, LLC. With incredible growth since its premiere in Las Vegas in 2011, Insomniac has generated more than $621 million dollars for the Las Vegas economy.

The study, commissioned by Insomniac, revealed that the third annual event generated $136.9 million in attendee spending, a 38 percent increase from the 2012 event.  Nearly 95 percent of attendees traveled from outside the Las Vegas area for the event, accounting for an estimated 92,000 hotel room nights alone, generating $25 million in accommodations. Additionally, fans spent more than $45 million on food and beverage, $22.1 million in transportation, $19.6 million in gaming, $13.1 million in entertainment and $11.8 million on retail spending. 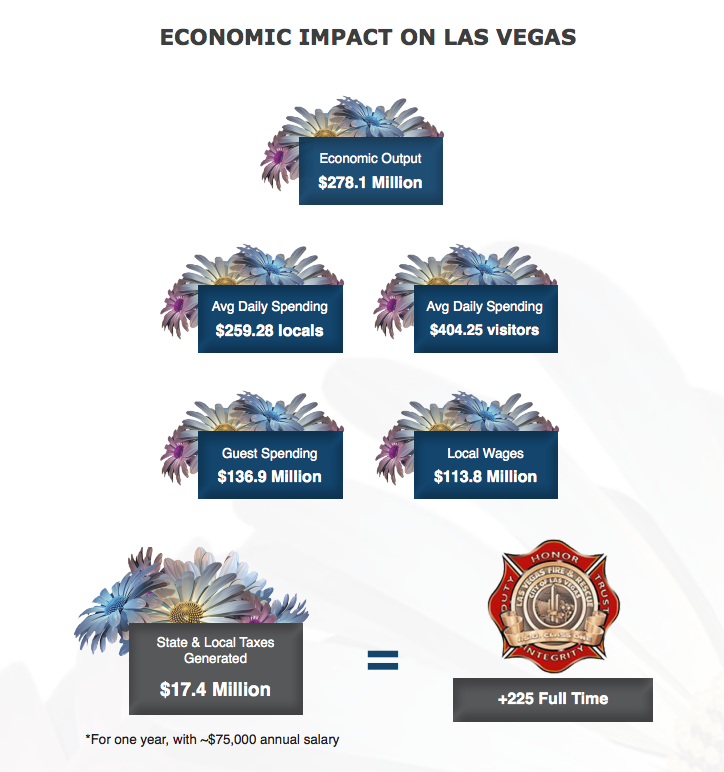 “Each year our goal with EDC Las Vegas is to improve the fan experience and I’m so happy that, as we continue to improve and grow, that Clark County continues to benefit too,” said Pasquale Rotella. “The Insomniac family and our fans have truly embraced Las Vegas as our home during EDC Week in the City, and the idea that the fans get to have fun while also creating hundreds of millions of dollars for the local economy is truly a win-win situation. We’re already looking forward to returning in 2014.”

The event hosted a sold out crowd of approximately 345,000 attendees throughout the three-day festival and thousands of fans attended Insomniac’s nightclub and dayclub events during EDC Week. Ticket sales indicated that fans traveled from all 50 states and 46 international countries for the festival. Nearly 82 percent of those surveyed plan to return for EDC 2014, and 93.1 percent said they would highly recommend others attend EDC, Las Vegas next year.

The festival created an estimated $17.4 million in tax revenue for state and local government. EDC Las Vegas’ overall economic output is the equivalent of 2,686 full-time jobs and increased labor income by $113.8 million for workers in Clark County.

“Again in 2013, EDC continued to grow, both in attendance and its impact on Las Vegas,” said Pat Christenson, president of Las Vegas Events. “The EDC experience has proven to be a huge success, and we look forward to working with Insomniac in 2014 and beyond.”

• Supported the equivalent of 2,686 jobs

• Increased labor income for workers in Clark County by $113.8 million
“It’s important to understand that these numbers are being driven by spending across Las Vegas as well as at the Speedway where the festival was held,” said Beacon Economics’ Founding Partner Christopher Thornberg. “The average group stayed four nights in town, meaning they were there to enjoy EDC Las Vegas, but also put spending toward the many other activities and sites the city has to offer.”

EDC will return to Las Vegas for its 18th edition June 20-22, 2014. Tickets for the festival at the Las Vegas Motor Speedway are currently on sale HERE. EDC Week will make its return to Las Vegas from June 17-23, and will include the third annual EDMbiz conference as well as the premiere of a brand new dance music awards show.