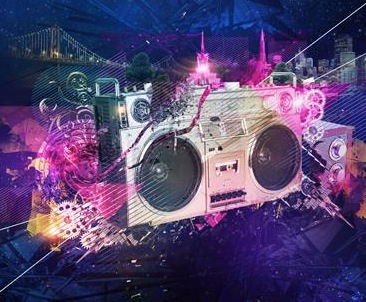 With anticipation for EDC sky high, California’s Bay Area lucked out this Memorial Day weekend as Insomniac Events delivered a very special treat to a SOLD OUT Bay Area crowd — the debut of the first ever Audio on the Bay. Boasting a one-of-a-kind lineup spread out over the three day holiday weekend, this event was dedicated to bringing a diverse variety of music not often found at other shows. The Craneway Pavilion’s huge metal warehouse feel suited the event perfectly, giving a slight underground vibe while providing more than enough room for all to dance comfortably. CO2 cannons hung from the roof, complimenting 8 lasers and a large LED wall that illuminated the entire warehouse. Located right on the Richmond Bay doors to the smoking area and outside bars were left open throughout the night allowing the cool ocean breeze to blow freely through the venue.

Wolfpack and Mercer kicked off the sold out day one with a bang, their Progressive and Electro House beats instantly got everyone’s energy flowing before the sun had even set. Next up we had the Special Guest of the night, legendary Benny Benassi who instead of playing classics like “Satisfaction,” gave us a taste of some new unreleased music by previewing his latest single as well as a track off his upcoming album. Canadian brothers DVBBS followed up on the decks, the two declaring to the world their love for California and its amazing weed as they dropped a filthy trap filled set. We all sang together when the infamous “Tsunami” played while DVBBS stood on the DJ booth conducting the crowd. R3hab changed up the mood debuting for the first time ever his remix of Calvin Harris’s “Summer” before headliner’s Dimitri Vegas and Like Mike took the stage. Tomorrowland’s super duo hand our hands in the air the rest of the night, bringing the house down with massive anthems and drops even DAVVINCII would’ve been proud of.

Speaking of DAVVINCII (If you’re not already familiar with the viral SNL skit done by The Lonely Island, watch it NOW), Alexx Adam started off day 2 with a surprise appearance inviting friend Sam F the creator of “When Will The Bass Drop” to join during his set. The two rocked DAVVINCII shirts with #getturneduptodeath on the back while throwing a few out to the crowd. After some mysterious deep house from a DJ unlisted on the line-up, Loudpvck stepped onto the deck and delivered a set that surprised all of us. Visuals of a ratchet complimented high energy beats as the two premiered their new song “Dominoes” and a massive unnamed trap track aimed for festival season. Audien shifted the mood with an epic trance set complimented by a beautiful bright colored lightshow, old school video game visuals and stunning mountain scenery. Saturday’s Special Guest was none other than Zed’s Dead who delivered us with our first dose of Dubstep and Drum n Bass for the weekend playing just about every song a fan would want to hear from the two. Time flew and lights dimmed as day 2’s headliner Eric Prydz prepared to take us on his one-of-a-kind musical journey. Prydz’s intricate long builds and uplifting melodies had the crowd mesmerized as we all danced to classics like “Midnight City” which he perfectly mixed into Deadmau5’s “The Veldt”.

Sunday’s line-up was guaranteed to drain any energy we had left as San Jose local Shelboy started the night off followed up by the dubstep beats of BARE. Energy continued to build with Henry Fong dropping his now Beatport top 10 track “Slapjack” and Clockwork who reminded everyone again what time of year is ahead of us with Calvin Harris’s “Summer” which he then mixed into New World Sound’s latest track “Pineapple”. It was obvious who most fans had come for when Laidback Luke appeared behind the decks and everyone raised their LL’s into the air. The mix master pumped up the crowd with Steve Aoki’s edit of “Get Ready” before dropping into Diplo & GTA’s “Boy Oh Boy”. After satisfying fans with several classics like “Speak Up” and “Better Off Alone” he ended the weekend with a throwback to Limp Bizkit’s “Rollin’”. Lights dimmed and everyone chanted, “One more song! One more song!” To our surprise, Laidback Luke popped up one more time from behind the decks and delivered just that. What a guy.

Even after 3 days of solid partying nobody was ready to leave. Insomniac Events had delivered a perfectly rounded event featuring a wide variety of music usually only found at festivals. We hope to see more in the back to the basics music series as Audio on the Bay was without a doubt a huge success. Amazing music, huge venue, beautiful bayside location, cool ocean breeze, and incredible vibes all combined together to create yet another unforgettable holiday weekend and the perfect holdover until EDC Las Vegas.

A special thanks to Insomniac for having us out, on the road to #EDCLV!