Los Angeles – Today, Insomniac announced the lineup of artists who are set to fill MetLife Stadium with booming beats at the third annual Electric Daisy Carnival (EDC), New York, this Memorial Day weekend May 24-25, 2014. With its boundary pushing, creative production, fireworks, larger than life art installations, full-scale carnival rides and more, the show will completely transform the grounds into an audiovisual playground not to be missed this holiday weekend. 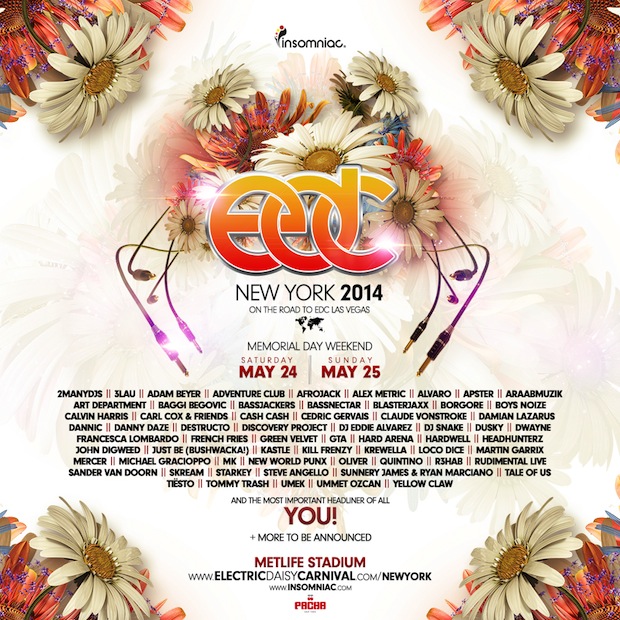 “We’re really excited to return to MetLife Stadium for the third annual EDC New York,” said Insomniac CEO and Founder Pasquale Rotella. ”Everything from the stage production to the theatrical costumes will be bigger and better. I am so inspired by the energy and passion of the fans and I want to give them an experience that matches their enthusiasm.”

Fans will be blown away by Insomniac’s signature creative atmosphere, which will include over-the-top production across four stages, including the East Coast debut of the iconic 100-foot animatronic Owl stage which unveiled to a sold out crowd at EDC Las Vegas 2013. EDC New York attendees will be the first to see the new and improved Electric Daisy art installation, standing at 125 feet tall, as massive fireworks displays light up the night sky above the festival grounds.

General admission tickets are currently priced at $199 with VIP for those 21 and over at $299 before service fees. Prices will increase as allotments run out. VIP amenities will include a separate entrance to the festival for rapid entry, exclusive decks overlooking the stages including lounge areas and full cash bars, private restroom facilities, and a souvenir laminate and lanyard.

For more information and to stay up to date with the latest Insomniac news, visit www.electricdaisycarnival.com and www.insomniac.com.