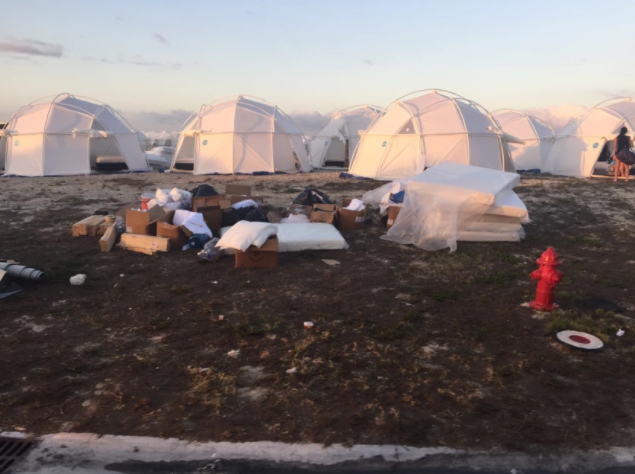 The so-called “luxurious “Fyre Festival, founded by Ja Rule, was set to take place this weekend in Exumas, Bahamas.

Festival-goers dropped thousands of dollars for this event, tickets to the festival ranged between $4,000 up to $12,000. These prices include admission to the festival as well as a private flight from Miami, first-class culinary food, chartered yachts, cabanas and more. Major Lazer, Blink-182, Migos and more were set to play at the festival.

However, once festival-goers arrived they quickly saw there was nothing luxurious about it.

According to several accounts on social media, angry visitors posted pictures of the disaster zone they encountered. They were to treated to sandwich bread, cheese slices, and salad. The cabanas were just soggy tents surrounded by piles of trash, several tents were unassembled tents, mattresses were sitting in piles of trash, there were no facilities, and feral dogs were roaming around the grounds.  People who thought they were about to have an experience of a lifetime, have called Fyre Festival the worst festival that is “worse than a refugee camp.”

Many celebrities and models were promoting this event on Instagram including Kendall Jenner, Emily Ratajkowski, and Bella Hadid. Descriptions of the festival included “Miles of white beach and turquoise water await attendees for a variety of sonic, communal and artistic activities,” and  “A marina which serves as V.I.P. docking space for yachts is located within yards of the festival grounds. Guests can choose to stay in a variety of tented accommodations, V.I.P. housing or private yachts.” They made it seem like this would be a glamorous, once in a life time event which was not the reality of this festival.

See photos of the disaster below:

Here's the dinner they fed us tonight. Literally slices of bread, cheese, and salad with no dressing. #fyrefraud #fyrefestival #dumpsterfyre pic.twitter.com/NmNXakSFlq

A view of the luxury food court with some luxury school bus transportation at Fyre Festival. #fyre #fyrefestival pic.twitter.com/XL3PtRw8q0

#FyreFestival is a fraud. They sold tickets to a festival on a private island "once owned by Escobar" when really it's to a Sandals Resort. pic.twitter.com/JaqPXKgRkP

Fyre Festival has released an official statement of this event on their website and has been canceled. Click HERE to read what the team has said.