As all of you know, unless you live under a rock, “Baby Shark” legend Jauz is currently in full swing with his Dangerous Waters tour. Just this weekend, he completed one of the most anticipated stops on the tour at the Shrine Auditorium in Los Angeles.

If you don’t know, Jauz is a California native and only 24 years young.  He moved to Los Angeles to launch his music career. He’s grown exponentially within the past few years as he started out as an up and comer at HARD to now playing every main stage there is.

Concert goers were patiently waiting for Jauz to come on as his set time was set for 11:20. Thankfully, openers Tynan and Drezo made this suspense a breeze. Tynan was the perfect artist to start off the night as he and Jauz have an incredible track on his Dangerous Waters EP with a fantastic and aquatically scientific music video to follow.

Once Jauz arrived on the stage, he brought the heat. Fans were readily prepared for 2 hours of intense bass lines and a whole lotta excitement. I could tell he wanted this to be an experience of progression. He began with some bangers of other fellow DJ’s and towards the middle and end would drop a bomb with all of his most popular tracks. Tracks like “Super Hott”, “Get to Me“, “Gassed Up“, and even the Jauz X Marshmello remix of Duke Dumont’s “Need U” illuminated the stage.

As well as all these phenomenal throwbacks, he didn’t fail to throw in some new tracks from his wonderful EP. These tracks included “The Beat” featuring Nonsens, and “Get To Me”.

Of course, he wouldn’t fail to leave out the best of all. Just 8 months ago, Jauz brought back the childhood hit of “Baby Shark”  and made a remix that would prove to be the song of the year as well as go viral all around the world. This track completely shut down the Sahara tent at Coachella Music Festival this past year with a set that reached over 100 million impressions over the first weekend.

If you haven’t been able to catch him yet, Jauz is still continuing his amazing tour. Check out the dates below and get your tickets here. 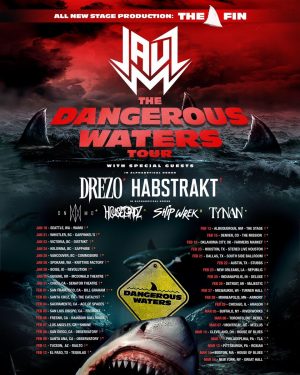 Everything We Learned From Pasquale Rotella's "State of Insomniac" Announcement