Jack Ü To Perform With Justin Bieber At Grammy Awards

The annual Grammy Awards are always a highly anticipate gathering of iconic entertainers and their peers. From the announcement of the nominees to the fashion on the red carpet, every aspect of the event contributes to the yearly hype. But what often stands out the most are the live performances from the artists we love and respect so much. Of the artists scheduled for this year’s ceremony, perhaps the most eagerly awaited is a collaborative performance from Justin Bieber and the iconic Skrillex & Diplo duo that is Jack Ü. The 3 men received a Grammy nomination on their hit single “Where Are Ü Now” for Best Dance Recording. In addition, Diplo is also up for Producer of the Year (Non-Classical) and his Jack Ü side project with Skrillex is nominated for Best Dance/Electronic Album on their eponymous LP. 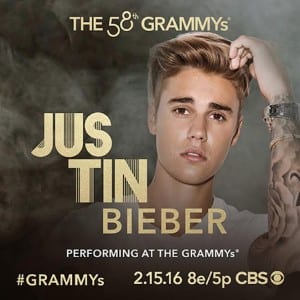 The 58th Annual Grammy Awards will air Monday, February 15th, 2016 at 8PM ET on CBS. Along with Beiber and Jack Ü, other artists scheduled to perform include Kendrick Lamar, Adele, the Weeknd, Ellie Goulding and more. This year’s Grammys will also feature several tribute performances as well. Lady Gaga will honor David Bowie, and the Hollywood Vampires (Johnny Depp, Alice Cooper, and Aerosmith’s Joe Perry) will pay tribute to Motörhead-founder Lemmy. B.B. King will also be celebrated with a special performance by Chris Stapleton, Gary Clark Jr., and Bonnie Raitt.

Be sure to watch to find out who wins what when the Grammys air on the 15th! In the meantime, enjoy the video for Justin Beiber and Jack Ü – Where Are Ü Now below: