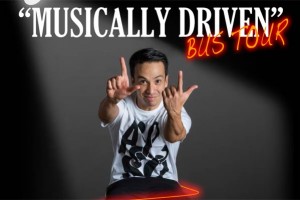 This past fall, Laidback Luke hit the road on the massive Musically Driven Bus Tour. Armed with a trailer full of the sickest interactive production and visual elements, Luke and his special guests Moska and D.O.D unloaded the biggest dance party of the year in cities across The United States and Canada.

The Musically Driven Bus Tour commenced September 26 in El Paso, TX and through the month of October hit the four corners of the United States and many of Canada’s largest cities before drawing to a close in Indianapolis, IN on November 2. Luke and his crew even broke out the superhero capes and masks for two special Super You&Me parties in Washington, DC and Chicago, IL.

Now you can experience the tour from a behind the scenes perspective through the new aftermovie, which provides the next best thing to being on the dancefloor yourself. Join Laidback Luke as he performs to packed audiences, hangs out on the tour bus, and even practices a bit of kung fu.

Check out the aftermovie below:

Hailing from a nation like the Netherlands that’s overloaded with talent, Laidback Luke has set himself apart from the masses through his incredible production skills, enthralling DJ sets, and devoted relationship with his fans. Luke has gained worldwide fame for his dynamic fusion of sound, which captivates house, electro, techno, and bass fans alike. It’s unpredictable and daring with fans always on their toes. He’s also known for being the first to bring through talent that’s about to break through to the big time, including Musically Driven tour mates Moska and D.O.D.