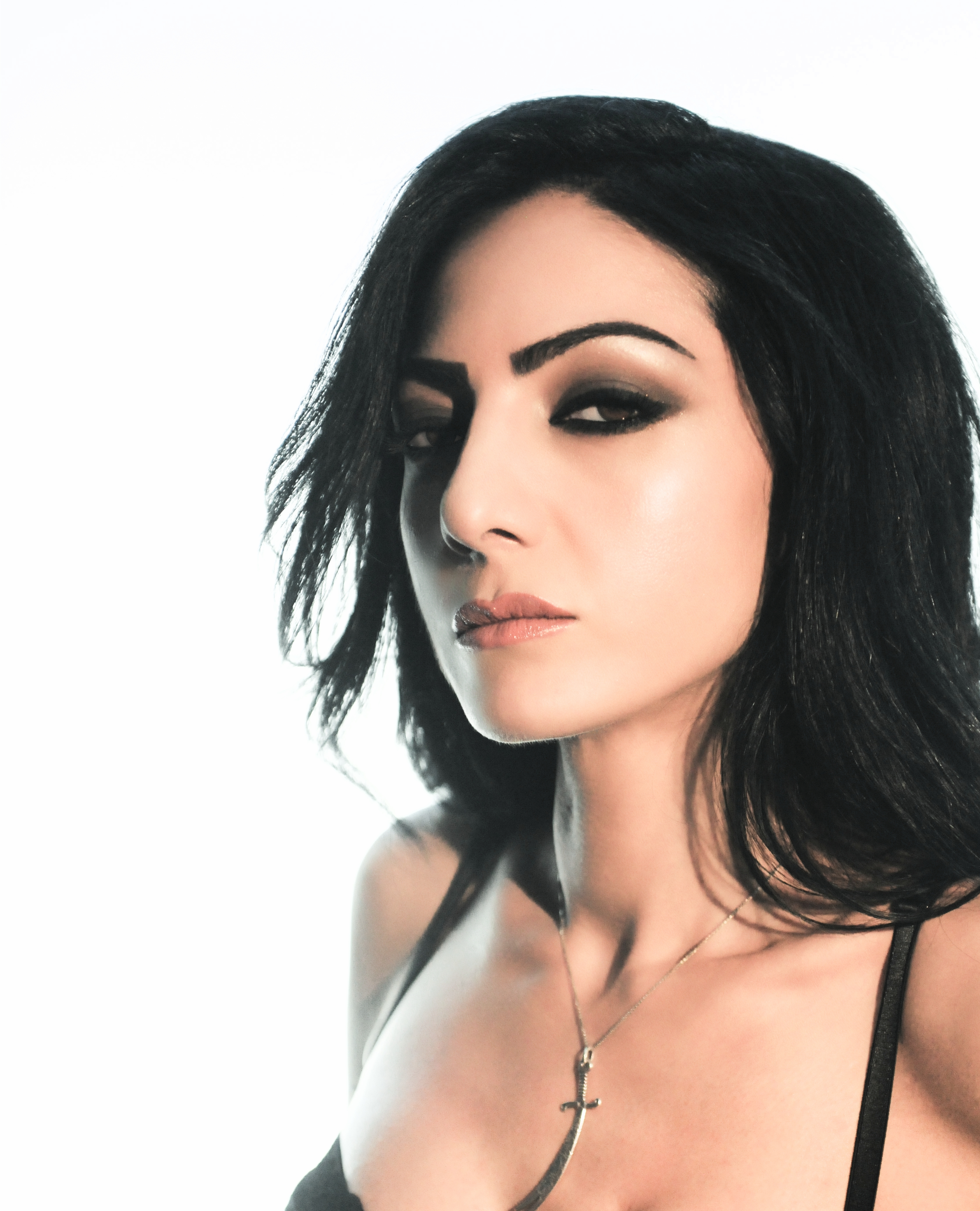 In a new series we’re doing, EDM Maniac will be interviewing some of LA’s own local talent. There’s a few people that immediately came to mind, and we’ll be exploring more DJs/Producers as we build the series.

Let’s get this started! Born in Iran and raised in Los Angeles,  DJ Lady Faith has become a staple in the local and international hardstyle scene. Headlining alongside Dash Berlin, Lisa Lashes, Headhunterz, Zany, DV8, Donkey Rollers, Wildstylez, Kutski, JDX and Caffeine – she has quickly become a household name. With events throughout the United States (like EDC Las Vegas) Canada, Holland and explosive Q-Dance event Defqon.1 under her belt, she has set her sights on bringing American Hard Dance to fans across the globe.

Lady Faith’s mind-blowing set at Defqon.1 in the Netherlands.

Her sound is both euphoric and dark, uplifting and emotional. It’s a blend of Persian sounds and pounding kicks that quite often pull at your heartstrings, which is something you an say about the hardstyle genre in general. But nothing is more fulfilling than to watch a female DJ/producer bring such energy and genuine love for the music during any set. It’s something that her fans have grown to love, admire and aspire to being. Lady Faith is an shining example of women getting involved and throwing down in the EDM scene, and it’s both refreshing to see and hear.  Lady Faith was mostly recently in Amsterdam for ADE and she’s certainly an ambassador for the women in the EDM industry and for the hardstyle genre as it continues to grow in popularity here in the states. We’ve had the great opportunity of seeing Lady Faith perform at local events in LA and on big stages like at Electric Daisy Carnival, and her connectedness to the community on both a smaller and grand scale certainly separates her from others.

In our interview below, Lady Faith mentions her current focus on bringing her style and sounds to Australia. She says, “Right now my focus is on Australia and giving the Aussie fans the best show possible. I am also developing a live set performance with The Pitcher we are calling “Pitch The Faith”. It is going to be a super fun show and I am very excited.” Back here in the states, we’re nothing short but excited to hear what this new show is going to be like!

Additionally, she recently released a track with The Pitcher titled “Fame” and it was very well received by the Hardstyle community (see official video below, and we can’t wait to see what new tracks she’s got coming out next. We’re proud to know she’s LA-raised (born in Iran!) and she’s someone we’re super excited to be on a journey with.

You can catch Lady Faith at the end of this month for “Pajama Jam 6” in Los Angeles at The Belasco Theater with Mark Sherry, Revolvr, and Kristina Sky. Tickets are now available for purchase at motivevents.com, and you can WIN TICKETS to see DJ Lady Faith on our Facebook page!

Check out our interview with Lady Faith below and be sure to show her some love on all your social networks! Lady Faith is currently signed to Hard Dance Nation.

Q: First, thanks for taking the time to speak with us! What have you been up to recently? I know you went to ADE, what was that like? Any highlights?

A: This year has been crazy. I’m trying to find a balance between touring and studio time but so far this year has been exhilarating. I just got back from ADE/HDE in Amsterdam and that was a great experience. I spent most of my time meeting with different industry executives but at night, it was spending time with colleagues at ADE events and partying till dawn almost every day. I had a blast.

Q: Speaking of traveling, what’s your favorite country to play in, what’s the craziest? This may be a tough one but who has the best crowd?

A: I may be biased but I just love the American crowd. They are so passionate and they just love to dance all night. As far as events go, you just cannot top the overall experience of EDC in Las Vegas. I am off to Australia in a couple of weeks and I am super excited to play down under for the first time.

Q: Who do you think is throwing the best events right now? What’s different about them? Anything that stands out to you?

A: It’s very tough to pick. Right now both Insomniac and ID&T are putting on fantastic events, especially in Hardstyle. It’s a great time for EDM in America right now.

Q: More about events — Funniest thing to ever happen at an event?

A: I see plenty of very funny and sometime insane acts at events, mostly by fellow DJ’s. I can’t talk about them though. If I do, then they may talk about my craziness too. It’s an unwritten rule that what happens at a rave stays underground. It’s the DJ Bro Code.

Q: I know you had some time at EDC Vegas and Chicago this year — what was that experience like, to be in front of those faces?

A: EDC Vegas this year was just amazing. I felt so privileged to be playing on Saturday night for so many fans. I really feel that this was the first year the fans actually came to see me and I was ecstatic to overfill my stage. It was one of the best days of my life.

Q: Aside from the events though, when you’re doing DJing and partying, how do you like to hang out and relax?

A: I love to spend time at home with my little dog. It may sound insane, but I just love to listen to new music, practice different combinations for my live sets and spend time in the studio making music. EDM has consumed my life so much, that it feels weird when I am not surrounded by music.

Q: Where do you get your inspiration from?

A: I like to draw from my Persian culture whenever I make music. There are so few female Persian DJ’s that I feel it has become my niche. There is a great deal of beauty in my culture that I always want to express to my fans in some form.

Q: How would you describe the EDM scene at the moment? How do you see the scene 5 years from now?

A: EDM is blowing up right now so it’s a great time for both the fans and the artists. The scene has always survived in the shadows but lately, the scene is just too big to stay underground. In five years, I expect the EDM market will be triple in size. The best days are definitely ahead of us.

Q: And if we were talking about the hardstyle scene – it’s seen sort of this mini – explosion recently. What are your thoughts about it finally making an impact in the states? What about internationally? It’s sort of big in other places so how would you (or can you?) compare?

A: Hardstyle is way too fun to be excluded from the huge festivals and fortunately, the fans have made their desires known to the promoters and Hardstyle is getting more exposure, especially in America. The US scene is still very small in comparison to the European scene, but we are making progress.

Q: Any special events coming up that you are looking forward to?

A: Right now my focus is on Australia and giving the Aussie fans the best show possible. I am also developing a live set performance with The Pitcher we are calling “Pitch The Faith”. It is going to be a super fun show and I am very excited.

Q: And just a little bit more about your style. A lot of DJs are trying some new styles and sounds. Has your sound evolved? Do you think it will?

A: I have always stayed true to Hardstyle. All of my career, people have been telling me to move to Trance or House, but I am stubborn for my love of Hardstyle. As the genre evolves, I evolve with it. I have always believed that the DJ needs to love the music more than the fans in order to put on a great show. It’s all about passion for your craft.

Q: Finally, what’s next for you? Any new  tracks coming out we should be on the look out for?

A: I am currently very busy working on a couple of tracks as well as a really cool EDM inspired clothing line. There are also some really exciting things that I hope will happen in the near future, but I can’t discuss them yet. I believe that 2014 is going to be a fantastic year both for EDM and for Lady Faith.

A: I also wish to say that I love my Faithful and appreciate all of the support they have given to me lately. The fans are the most important thing to me always. You guys rock!!!!

Q: Thanks for taking some time to speak with us!

A: It was a pleasure.