Celebrating it’s 25th year, Lollapalooza 2016 has released a lineup for 2016 that reaffirms it’s reputation as a festival  music lovers must attend. Extended to span over 4 days this year, the eclectic lineup features something for everyone!

Starting at the top of the poster, headliners Radiohead, Red Hot Chili Peppers, J. Cole, Lana Del Ray and Disclosure stand out. As well as rappers like Future, G-Eazy, Mac Miller, and A$AP Ferg, and rock bands like LCD Soundsystem, Jane’s Addiction, The 1975, HAIM, and Two Door Cinema Club. There’s also a sprinkling of some country music with Chris Stapleton, and stellar vocals from artists like Halsey and Leon Bridges.

EDM will also have quite the presence this year with everyone from Major Lazer to AC Slater set to perform. Flume, Flosstradamus, Hardwell, and Martin Garrix are just some of the bigger electronic artists named on Lollapalooza’s lineup. Along with others like Excision, Big Gigantic, GRiZ, Adventure Club, Oliver Heldens, Seven Lions, Bro Safari, and the list goes on!

Lollapalooza 2016 will take place at Grant Park in Chicago, Illinois, from July 28th – 31st, 2016. Check out the full lineup below, or head over to the official website for more information. Unfortunately tickets are technically SOLD OUT, however VIP, Platinum and Hotel packages are still available here and do include admission to the festival. 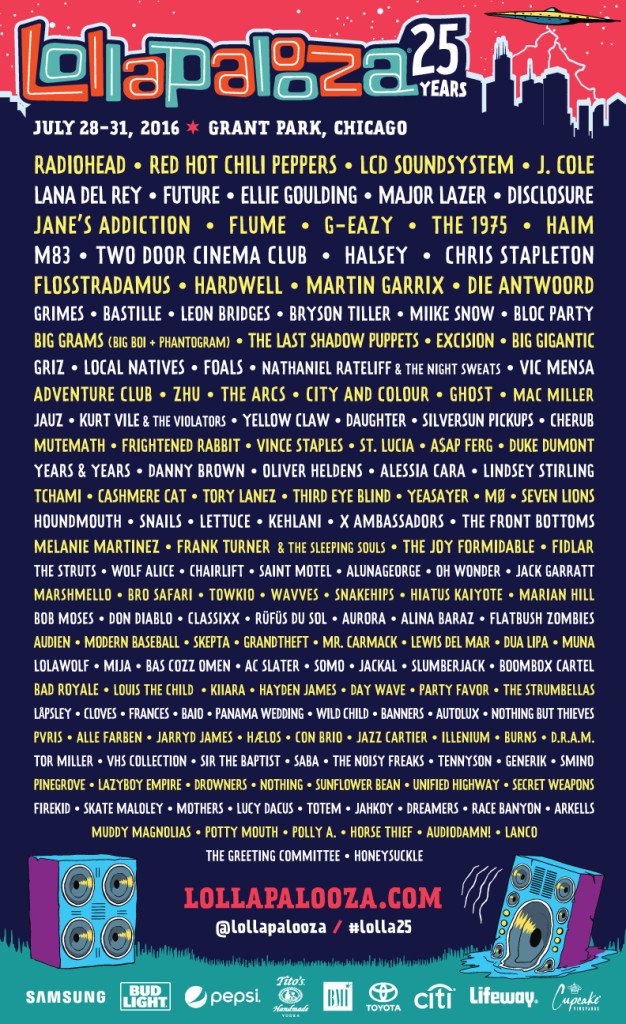