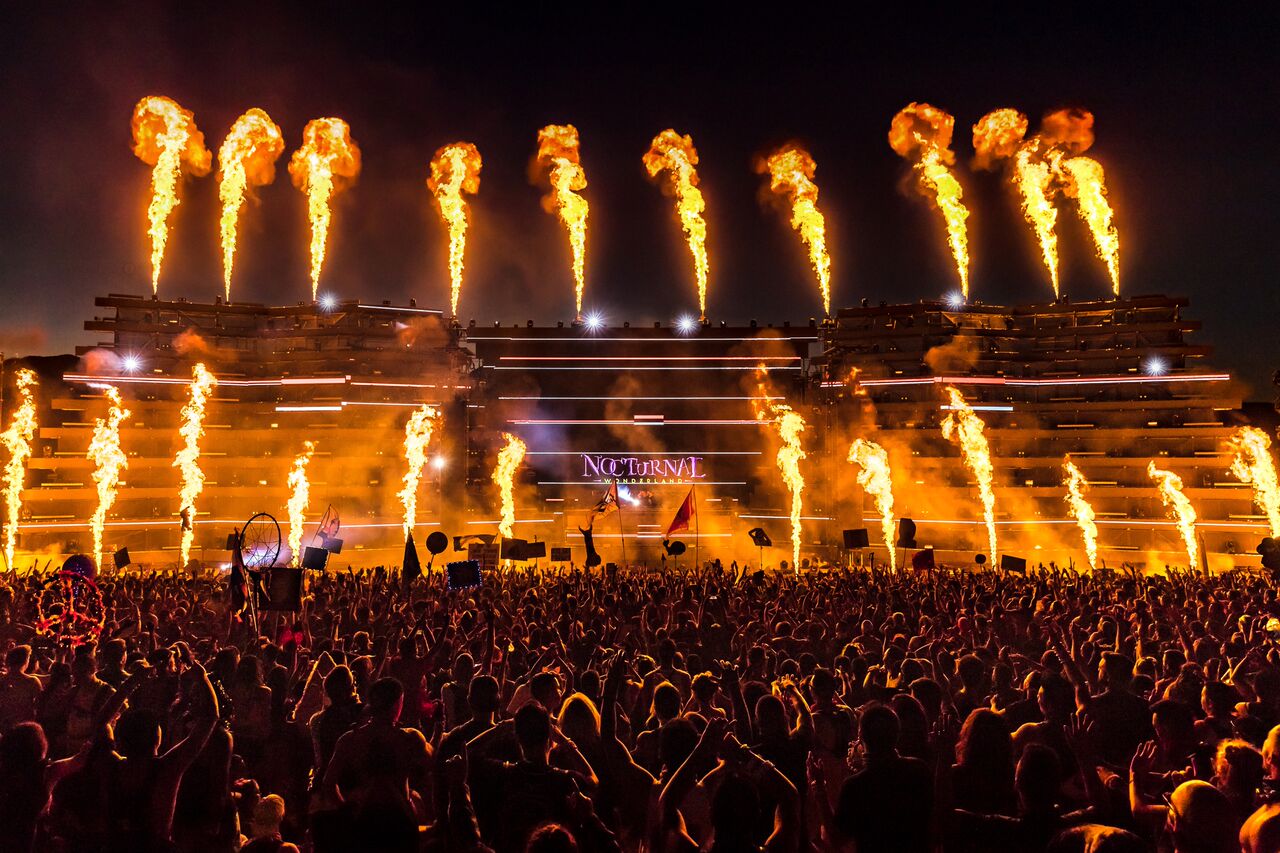 Although inherently impressive, the 21st year of any event isn’t the biggest deal and I didn’t expect to be as pleasantly surprised as I was.

What I do know is that everyone who wasn’t there missed an event that demonstrated Insomniacs ability to adapt and improve.

Three months ago, the 20th anniversary of Insomniacs biggest event (EDC) passed and with it they made a statement they had been building to for the past few years; that Insomniac events are about the experience.

Although they had been pushing that mantra since EDC’s move to Vegas, not a single one of their raves said that louder than EDC 2016. I mean, just take a look at the stage production. EDC 2016 wasn’t just a rave, it was a comprehensive experience. Walking into the speedway that year was like walking into a new world.

Having reached that point in their evolution though, Insomniac was faced with a pivotal decision when their next big event (Nocturnal 2016) came around; a decision everyone has to face at some point: to stagnate or to evolve.

Do they continue to push the same style of event as EDC 2016, or do they take their events in a new direction to adapt to a changing market?

Well, Insomniac chose the latter, and they did so by placing emphasis on the most fundamental element of their events, music, something about which I couldn’t be happier about.

Music has never been an area where Insomniac was slacking by any means, but music was in the forefront of Nocturnal unlike any Insomniac event in recent years, and they accomplished such a feat through a variety of different methods.

The first and most obvious is the lineup. If you keep up with EDM Maniac, you’re well aware of how much we loved the lineup this year. On Saturday alone I heard dubstep (Caspa & Rusko), techno (Âme Live), deep house (Lane 8), Drum and Bass (Spor), Hardstyle (Lny Tnz), Big House (TJR), Future Bass (G Jones), and Tech House (Chris Lorenzo).

An excellent lineup may sound standard for an Insomniac event, but they have been known to leave certain genres in the dust at their events as well. EDC 2013, 2014, and 2015 all seriously lacked dubstep, and techno didn’t really start making a resurgence at any Insomniac event until 2014. Nocturnal, on the other hand, featured it all.

The second and significantly more important way Insomniac brought the attention back to music was through presentation. Insomniac had been prioritizing presentation over music for years up until that point, and if their events were to truly evolve, that was the area that would be required to change the most.

Luckily for everyone, Insomniac got it just right.

Being that Nocturnal was taking place at San Manuel once again, I was truly surprised by how different everything was set up compared to the last time I was there. Especially because San Manuel is the venue Insomniac traditionally uses to get creative as far production goes.

Other than the one time a year they can use the Las Vegas Motor Speedway (which is a production team’s fountain of youth), they’re left with the NOS Center, a venue that requires more than half the stages to be indoors, and San Manuel which actually allows for some level of creative expression.

During the years of Insomniac’s “about the experience” phase, I’ve seen every manner of ‘Alice In Wonderland’ influenced stages at San Manuel. One year there was a giant tree with a face on it. One year there were two enormous chess pieces on either side of MainStage.

See, while the giant trees and chess pieces were whimsically crafted, they served a purpose beyond looking cool, and that purpose was to be concrete.

This means that regardless of what DJ was spinning on stage, the caterpillars and rabbits would be the same, which accomplishes two goals.

The first is to humanize the DJ. When a DJ is standing on a giant stage in front of thousands of people, it’s easy forget that they are human beings spinning records. Well, by comparing their tiny human form to an enormous caterpillar, the DJ seems all the more like a real person.

The second is remove focus from the DJ. When Pasquale first started attending events, the idea of focusing on the DJ was unheard of. DJs were in a small corner of the room or hidden under a shroud of smoke.

That era of dance music may be long gone, but the way Insomniac saw it was that if the DJ was now required to play on some massive stage, they could use that giant stage to curate an environment rather than put all the focus on the DJ. Thus came the giant owls and the kinetic cathedrals. With such intricate production, it makes it harder to give attention to a tiny little person when a huge owl’s unblinking eyes are looking right at you. It’s as if they’re saying the DJ is just another person at the party, which was thrown by the owl.

With this in mind, the decision to revert back to the standard formula of lights, lasers, and screens is actually quite telling, because it once again shifts the focus entirely back to the DJ.

When a stage is only lights and lasers, there is basically nothing concrete about it. Plus, many of the artists have their own lighting designers with whom they work to configure a look and feel specific to them. So instead of taking turns under the enormous tree, the DJs at MainStage had a chance to express themselves both visually and aurally in a unique fashion, and let me tell you I had a great time staring at them as well as listening to them.

After all, I’m the type of person who attends these events for the music, and to that point the rest of Nocturnal was set up more efficiently than any event I had been to at San Manuel.

In the same way any giant set pieces were removed from MainStage so were many large scale art installations and ferris wheels from the rest of the grounds. I’m not saying I’d rather not have such art pieces at a festival, but I definitely would much rather have more stages….which is exactly what happened.

Borrowing from mindfulness festivals the way they borrowed camping, Insomniac made music a constant despite San Manuel’s segmented layout. Everywhere you were, a new set and a new stage was never more than a few steps away, yet each stage was almost completely isolated when it came to sound, sufficing every notion of intimacy and DJ-ignoring that was removed from Main Stage.

Main Stage dominated the main amphitheater, but as you would make your way towards the rest of the festival, the sounds of the Upside-Down House would be introduced to your ears.

San Manuel’s had the Upside-Down House before, but this was by far the best rendition. An oasis of funky grooves, the stage was surrounded by bars in the same manner as a club allowing social interactions to flourish. If you wanted a place to chill, dance, meet people, and enjoy a panoramic view of your surroundings, UDH was the place to go.

Keep walking towards the lower section of San Manuel, and you’d pass the boombox art car which was always a party. Then, right as you descend the hill to get to the rest of the festival, you’re immediately thrown into a playground with five different stages.

On your left you have the Temple Noctem (Hardstyle stage) and the Sunken Garden (Techno Stage). On your right you have the Smirnoff house and Corona Electric Beach. At the back you have the labyrinth (Bassrush Stage).

Sounds like a lot to fit into one small patch of land right? Well it definitely was, but Insomniac’s ability to not only fit the five stages in such an area, but make them flow was what defined the event.

Sunken Garden and Temple Noctem were placed back to back, and even though I’ve seen such a set up fail at multiple festivals, Insomniac succeeded by essentially removing production from both of them and focusing on getting the sound right. Not once did I hear a raucous hardstyle drop while enjoying a subtle buildup at the Sunken Garden, and vice versa.

Smirnoff house did have a capacity limit which would lead to a line protruding out of it at some points during the festival, but that was barely ever an issue. Most of the time, you could walk right in to see Sacha Robotti, G Jones, or Laidback Luke spin a set in front of 30 people.

The Labyrinth took it’s place in the back, and despite the fact that this was the stage where the volume was disappointing at times, the bass was still rumbling for most of the night without reaching any of the other stages.

I personally never went into the Electric Beach, but from the outside it basically looked like a portable beach cabana. Music was everywhere at Nocturnal 2016, and Insomniac did a better job showcasing it than they had in a long time.

This doesn’t mean that the event was completely absent of Insomniac’s traditional wonderland flavor, it was just done in a tasteful way that complimented the music.

Instead of massive performing troupes walking the grounds drawing attention, they would blend into the crowd. At Sunken Garden I saw a group of people dressed in black whip out fluorescent flags shaped like familiar wonderland creatures. Combine them with the minimal lighting at that stage, and it was like the creatures were floating next to the giant disco ball.

Across the rest of festival there were other small yet effective ways to maintain the magic from a visual standpoint. There were lights hanging in trees, pathways under colorful archways, and more than few costumed individuals making sure people were smiling. Plus, an old fashioned carnival swing right near the Labyrinth.

As I stated prior, I am the type of person who puts the music first when it comes to events. That’s why I thought Nocturnal was so great.

However, I know there are plenty of people who do not share such an attitude. There are plenty of people who thought the stages pulled out of a Lewis Carrol classic were the coolest things ever, and considering there were generally less people at Nocturnal than most Insomniac events I have attended, my guess would be that those people are the ones who were generally missing from the event. Also because any real fan of music wouldn’t be able to pass up that lineup.

The truth is, Insomniac took a risk by shifting the focus like they did, and as a result some feathers were certainly ruffled. That’s how it always goes. People don’t like it when their events change, especially when they get more expensive every year.Just like when Insomniac started adapting the “about the experience mantra”, though, through careful observation they will improve everyone of their events in the effort of defining their new aesthetic.

Just look at the Escape lineup, which is also incredible. Most of the names on that list are either totally new to Insomniac events or have only started playing them in recent years. Granted, Escape is at the NOS Center once again which has always lacked production, but such a lineup furthers the idea that Insomniac events are changing.

I personally think they’re changing for the better. Especially after such an excellent Nocturnal. It might take a year or two for some of the more starry-eyed ravers to come around, but if these events were to stay the same forever, they wouldn’t be Insomniac events.