This upcoming Thursday, February 18, Tomorrowland’s One World Radio is turning 2 years old. To help celebrate the two-year anniversary, Tomorrowland’s digital radio and content destination is throwing a 5-day on-air birthday party takeover which features 50 different artists and friends of Tomorrowland from around the world. The artists include Armin van Buuren, Dillon Francis, Steve Aoki, Nora En Pure, Tiësto, and many others. From Monday, February 15 to Friday, February 19, 10 artists will appear on the radio station every day to play a special 30-minute set that will feature tons of unreleased music. 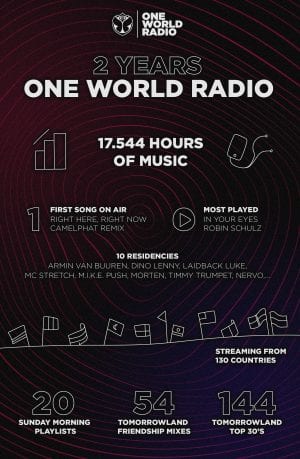 Listeners can tune into One World Radio online on either the Tomorrowland app or on YouTube starting Monday, February 15 until Friday, February 19. The radio station will be broadcasted between 10:00 and 19:00 CET.