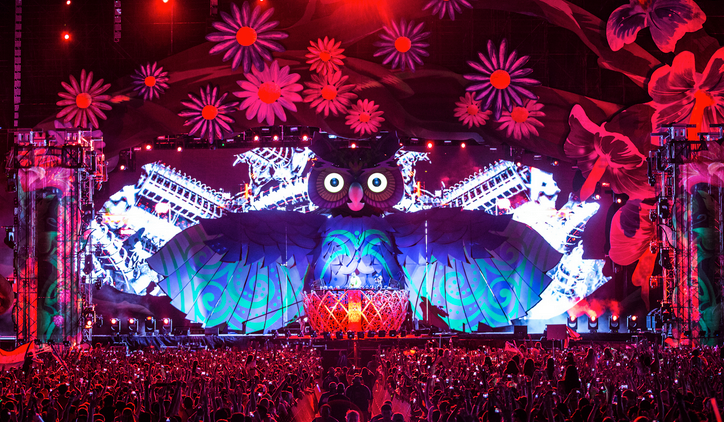 SANTA MONICA, May 6th, 2014 – Insomniac, Focus Features, and Tugg are excited to announce that theatrical showings of the movie Under the Electric Sky will be available starting on May 29th with crowdsourced screenings.

Under the Electric Sky is an immersive 3D documentary that explores the allure of the EDM (electronic dance music) phenomenon as told through the experiences of six different groups among the nearly 350,000 festivalgoers attending the Electric Daisy Carnival (EDC) 2013 in Las Vegas. These moving personal stories are set against a soundtrack that includes globally renowned artists such as Afrojack, Above & Beyond, Armin Van Buren, Avicii, Hardwell, and Tiësto. The lights, lazers, art, and confetti from EDC make you feel like you’re a part of the experience.

Beginning today, Under the Electric Sky is being made available through an innovative partnership among Insomniac, Focus Features, and the premier theatrical crowdsourcing company Tugg. This partnership will allow the hardcore fans of EDC and dance music the first opportunity to view the film.

The fan-created event screenings will commence on May 29th and then continue throughout the summer. Here’s how you can request and host screenings locally, becoming Event Promoters in the process:

(1) Fill out the Event Request Form via www.undertheelectricsky.com and choose a theater, date, and time.
(2) After theater approval, the Promoter’s Event Page can begin reserving tickets.
(3) The Event Promoter and attendees share the event and confirm the screening by selling enough tickets before the deadline.
(4) Enjoy the show!

For a limited period of time, fans-turned-Event Promoters will be entered for a chance to win amazing prizes, including tickets to the Electric Daisy Carnival (EDC) 2014 in Las Vegas; helicopter rides to and from the Electric Daisy Carnival (EDC) in 2015; and a “Golden Ticket” package of passes to all Insomniac music festivals within the next year. For more information on being a Promoter, and the Official Sweepstakes Rules, visit www.undertheelectricsky.com.

FIND A SCREENING NEAR YOU

The 3D movie is executive-produced by Pasquale Rotella, CEO, founder and creator of Insomniac. Beginning in 1997 with a few thousand revelers in Los Angeles, the Electric Daisy Carnival has become the largest dance music event in North America. The festival is known for its immersive entertainment featuring state-of-the-art stage production, pyrotechnics, and lighting; roaming theatrical performers and dancers; full-scale carnival rides; and interactive art installations.

“I’m really proud of how Under the Electric Sky turned out because it truly captures the amazing spirit of Electric Daisy Carnival,” said Mr. Rotella. “If you can’t make it to EDC, this will be the next best thing to being there. Anyone who has ever been misunderstood or has looked for a place where they belong should see this movie.”

Mr. Rotella brought the creative team together to make Under the Electric Sky, including producers Haven Entertainment and directors Dan Cutforth and Jane Lipsitz, whose previous credits include such concert documentary hits as Katy Perry: Part of Me and Justin Bieber: Never Say Never, which grossed nearly $100 million at the worldwide box office.

Mr. Cutforth and Ms. Lipsitz bring the event to life by going behind the scenes to show what it takes to stage one of the biggest parties in the known universe. They chronicle the unique journeys of individual attendees from different walks of life, all of whom share one common desire – to shed their inhibitions and immerse themselves in this judgment-free celebration of life and music. Renowned artist Kaskade created the musical score to accompany the film, and KCRW music director Jason Bentley acted as the music supervisor for the documentary.

Focus Features’ theatrical release of Under the Electric Sky will commence in June, following the fans’ Tugg bookings, with openings in cities including New York, Los Angeles, Austin, and Las Vegas.

Nicolas Gonda and Pablo Gonzalez, co-founders of Tugg, commented, “We’re proud to partner with Focus Features, Insomniac, and Haven on this groundbreaking campaign, empowering individuals and organizations across the country to host their own screenings of this vibrant and inspirational documentary. EDM fans everywhere have the incredible opportunity to bring the festival experience to their local community – in 3D.”

Insomniac (www.insomniac.com) produces some of the most innovative, immersive music festivals and events in the world. Enhanced by state-of-the-art lighting, pyrotechnics and sound design, large-scale art installations, theatrical performers, and next-generation special effects, these events captivate the senses and inspire a unique level of fan interaction. The quality of the experience is the company’s top priority.

The company was founded by Pasquale Rotella, and has been based in Los Angeles since it was formed in 1993.

Tugg, Inc. (“Tugg”) (www.tugg.com) is a web platform that enables individuals to choose the films that play in their local theaters. Through Tugg, individuals are empowered to select a film, screening time, and nearby theater, and then spread the word to their immediate and online community. Once a necessary amount of people commit to attending, the event will be confirmed; and Tugg will reserve the theater, manage ticketing and ensure delivery of the
film, allowing the audience to sit back and enjoy the show. Tugg is currently working with exhibitors Alamo Drafthouse Cinema, AMC Theatres, Carmike Cinemas, Cinemark Theatres, Regal Cinemas, and the Studio Movie Grill, as well as additional regional and independently owned theaters across the country. These exhibitors provide theatrical venues for individually curated events showcasing Tugg’s growing library of hundreds of studio and independent films. For more information on how Tugg works, visit www.tugg.com/howtuggworks.

Focus Features (www.focusfeatures.com) makes, acquires, and releases movies from rising and established talent and filmmakers. The company is moving forward with a diverse slate, with most being wide releases appealing to a range of moviegoers. Staying true to the company’s roots, the slate will also include several specialty films each year.

Upcoming Focus Features films include The Signal, starring Brenton Thwaites, Olivia Cooke, Beau Knapp and Laurence Fishburne; Wish I Was Here, a comedy directed by Zach Braff which also stars Braff along with Kate Hudson and Mandy Patinkin; The Boxtrolls, the new family event movie from LAIKA, directed by Anthony Stacchi and Graham Annable with a voice cast that includes Ben Kingsley, Toni Collette, Elle Fanning, Isaac Hempstead-Wright, and Tracy Morgan; the true-life dramatic thriller Kill the Messenger, directed by Michael Cuesta and starring Jeremy Renner; and The Theory of Everything, starring Eddie Redmayne, as theoretical physicist Stephen Hawking, along with Felicity Jones.