We’ve all been there, waving goodbye to our parents as we embark on yet another epic adventure into the unknown depths of the rave experience, texting them back during the event with a “I’m doing good!” to ensure them of your safety. But you know that the word “good” is a meager explanation for what you’re truly witnessing, your favorite DJ absolutely destroying the decks on stage as you bob your head in approval and soak in the sweet sound of escape. But what if you could bring your parents along to share in the experience that you love so much? What if you could take them with you on the journey, along the way allowing them to embrace the culture and discover for themselves that it’s not all about drugs like they saw on the news? Last week, after five years of the consistent festival and EDM event-going, I finally got the opportunity to take my mom to an EDM event, and here are our discoveries along the way.

15 days before the event, which was a Fisher concert in Orlando, Florida, I realized that it was time for my mom to experience what her three children are always raving about, no pun intended. I invited her, bought our tickets, and she wrote it down in her calendar, as moms tend to do. When the night of the concert approached, I interviewed my mom to gain an understanding of her take on the entire EDM scene before she experienced it firsthand. 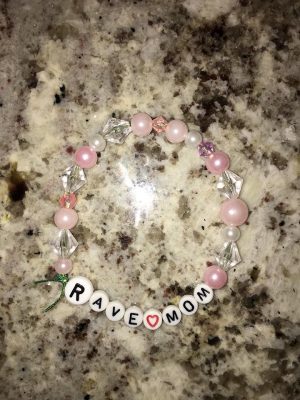 As most mothers would, she began by stating that when her kids first started raving that she was extremely worried that it was all about “the mollies” (direct quote from her LOL). I asked her why she felt this way, and she replied that it was because of the negative press. This is always a hurdle that we as a culture face, and I find myself oftentimes explaining to my older family members and friends that the music is the priority, and that I would never allow any form of impairment to skew my perception and interpretation of the music. Luckily, my mom said she trusts my brothers and I, and I’m sure she can see by our dance parties in the kitchen how much we love and cherish the music, and the music only. She mentioned how much money we invest in EDM events, but she said its justified by the bonding experiences we’ve shared as siblings. I’m so glad she understands our love for the music and for each other, and I’m so lucky she’s my mom.

She said her original interpretation of the scene was negative, but she said she began to realize that PLUR (direct quote again) was a big part of it, and that the majority of the people are good people gathering with loved ones to experience great music. Then, I made her some RAVE MOM kandi.

Fast forward to the concert, and I will let these direct quotes from my mom that I gathered in the Notes section of my iPhone describe where her head was at. I dare you not to laugh.

“I forgot what the P in PLUR means”, “I feel under tattooed”, “Looks like I forgot my tube top”, “I hope nobody ruffles me but if they pinch my butt that’s ok” “it smells like pot”.

My brother and I took her to the corner where a bunch of people was shuffling, and she really enjoyed watching them. She even started Irish dancing, which she did when she was a kid, and it was hilarious. When Fisher came on we found a solid spot by VIP and danced the night away.

The next morning, I did a follow-up interview with my mom about her experience and how her perspective has changed. She said she was surprised by how nice the audience was, and she can’t believe how much energy we must expend at festivals. She said it takes a lot of energy to engage in the experience, which is very true. She said it was basically what she expected, but that it smelled “a little funky” in there. Because of this, she said she might enjoy a festival more because it’s outside and more open. She was happy about the security measures put in place at the venue, even though she worries about all of the mass shootings that have occurred lately, and she loved the shufflers. She mentioned that many people were there “to show themselves off, not about the music, more about how much attention they can garner”, which I believe is another fun aspect of the scene for some people. 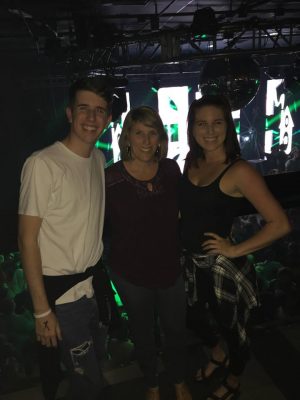 She said the experience made her glad we are her kids, and I can tell you, I am so glad she’s my mom. A lot of parents would refuse to go to such an event, but my mom has always been so open and supportive of her children’s lifestyles. Not once has she impeded upon our EDM infatuation, although I know she worries sometimes. She even said the news over-exaggerated the negatives of EDM culture. I’ve been waiting years to be able to bring her to an event so we could experience something I love so much together, and I promised her I’d go to a football game with her in exchange (If someone could teach me how football is played, that would be nice). She said she is proud of the way we work hard to finance these events that we ultimately get to bond as siblings at, and that our bonding through music is something she will remember forever. Bringing my mom to the function was one small step for man, one giant leap for mankind in showing our elders that the rave scene isn’t just what the news shows.

Jauz Hits The Shrine In LA for Dangerous Waters Tour