Red Rocks Season is Firing Up with New Lineups

Red Rocks is one of the country’s best venues due to it being an open-air amphitheater surrounded by two Red Rocks that are angled outwards from the stage. Located just west of Denver, Colorado, this venue has been popular for many years and can fit a cozy 9,525 people giving it an intimate and unique feel. From your spot, you have a view of the Denver metropolitan area and the rising of the moon on the eastern plain 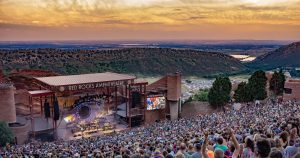 As of mid January, the venue has released dates of annual artists that return every year as well as new additions to their summer long party. It seems as though every weekend has a spectacular experience happening and even a few gems during the week.

While this fired up list is short, there are many more announcements to come.

This venue has been a favorite spot for artists to play at, especially for Bassnectar and The String Cheese Incident. It is unlikely to ever experience another Bassnectar show at Red Rocks due to the new addition of the sound ordinance but it has not stop other artists from coming.

The sound ordinance is also very difficult to pinpoint. As a patron, you are certainly going to experience an amazing and unique show and experience with little realization that the music is just a little quieter inside the venue than from years prior.

Lightning In A Bottle Drops A Big Lineup for 2018