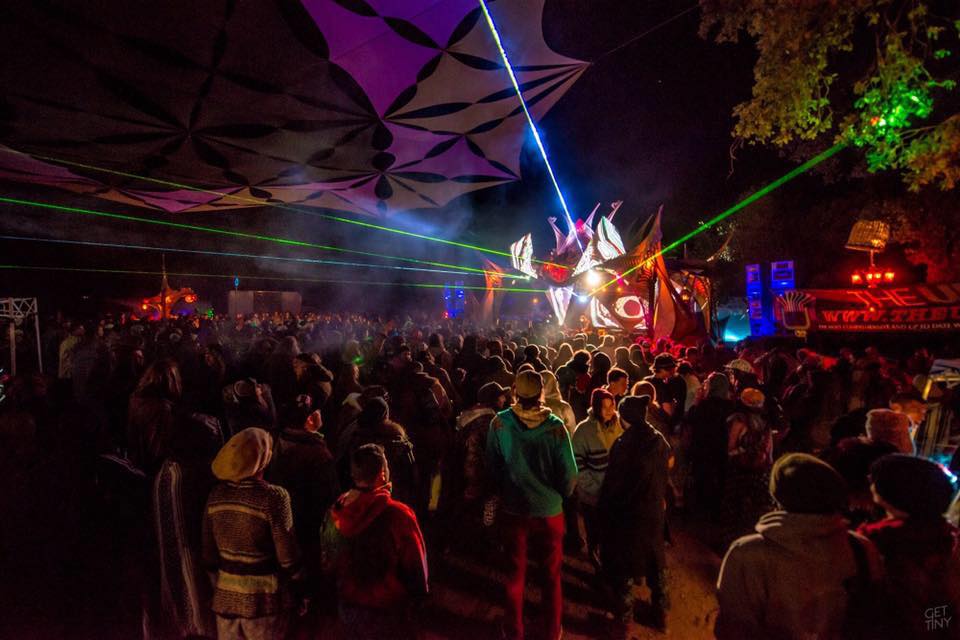 Serenity Gathering: Some Genuine Hits, But A Lot More Misses

The third edition of Serenity Gathering took place this past weekend at the Joshua Tree Retreat Center in Joshua Tree, California. Over the course of 4 days, the surprisingly urban patch of desert was decorated with rustic art pieces and scene-driven music to be enjoyed by people who were described as “genuine” by Domino of the Hieroglyphics crew who was DJing for Del The Funky Homosapien; one of the four festival headliners.

To see such a affluent name in underground rap on a transformational festival lineup is unusual as such festivals often rely on the cheaper production costs of electronic music, but as Domino said during their set, they wanted to come to Serenity because it seemed like a “genuine festival” with “genuine people”. Domino also made this statement at the expense of larger festivals like Coachella regardless of the fact that if they were at Coachella, they would have had an audience of hip hop fans in front of them instead of the genuine festies who were less-than-hyped on the rap duo.

Granted, I can see why he would say that about larger festivals, but as genuine as the people were at Serenity, I wouldn’t be surprised if, based on their third edition, there isn’t a fourth. See, while Serenity was attracting all of their “genuine” people to come out, larger festivals were focusing on all of the little details that were often forgotten by Serenity. That’s why those larger festivals lasted long enough to become as big as they are, attention to detail.

To Serenity’s credit, they did have to completely uproot the entire event to a new location less than a month out due to the Lake Hemet campground “breaching their contract”, and as far as the attendee’s could tell, that was all that changed. No artists were cancelled. The new venue was nearly the same distance from most Southern California cities as the old one, but as Serenity’s staff were completely swept up in the sudden shift, the festival as a whole suffered.

Bathrooms went hours without being cleaned. The camping area for cars wasn’t geologically sound, and several cars were stuck in the sand throughout the weekend. The temperature spiked in the high 80’s (even though Serenity’s Facebook posted three days of mid 70’s) and there was absolutely no shaded areas in the main festival grounds, which was especially tough on Sunday after a timing issue early in the day completely turned the festival over, causing almost all the artists to play different stages at different times, which forced attendees to search the near-scorching festival grounds trying to find who they paid upwards of $240 to see. Thriftworks played over 4 hours after his set time on a different stage, and Bleep Bloop didn’t end up playing at all.

The most blaring issue throughout the weekend however was how not-blaring the sound was. This might not seem like an unordinary problem for a festival to have, but the difference between Serenity’s sound issues and another festival’s sound issues is simply because there weren’t actually issues with Serenity’s sound; it was just quiet. Nothing was cutting out. There wasn’t any serious amounts of feedback. The subwoofers weren’t over powering the mains. In fact, the sound from the premiere Funkworks Funktion-One setup was crystal clear….if you were leaning up against it.

This wasn’t just later in the evening either, it was all day, and for every artists including headliners like Shpongle and Emancipator. In the evening though, the same Funktion-Ones weren’t louder than a laptop speakers. The hours from 10PM to 7AM at festivals are the most important, especially if that’s when some of the best artists on the lineup are playing (which they were at Serenity). It’s those hours when the heat is no longer bogging everyone down, and people really allow themselves to let loose. Its those hours that are cherished most because most people simply can’t stay up that late in other situations.

When I was looking at the set times for Serenity and saw Pumpkin was spinning at the New Moon stage (one of the side stages) at 1230 AM I was ecstatic. Not only would he be playing a much more intimate set in front of a smaller crowd, but he would bring out much funkier and riskier tunes for the after-hours audience. Unfortunately I couldn’t tell how risky or funky any of his tracks were because they were drowned out by voices at a conversational volume.

It was the same way every night, which lead artists like Brad, Treavor and Dela from the Moontribe squad to be heard in the middle of the day. If you’re familiar with MoonTribe, you know that those three artists usually spin in the sweet spot of 10PM to 7AM and full volume. It’s one of the reason’s Moontribe has such a loyal following. To most people, MoonTribe equals the loudest beats in the darkest night. It defines their gatherings. Well, most of their gatherings.

What saved Serenity for me though was what was happening at the second side stage (known as the Bridge Family Stage) before the after hours volume limits were set. While the sun was up, the Bridge stage rejected nearly every preconceived notion I had going into Serenity by hosting some of the most talented jam, funk, and experimental rock bands I had heard in years. TV Broke 3rd Eye Open effortlessly incorporated desert sand sitar with delta blues harmonica while Gene Evaro Jr. and his band had people gyrating in the most rambunctious fashion. In the modern age, what’s left of the hippie movement has started to become more associated with electronic music, but the Bridge Family stage brought the new wave of flower-children back into the 60’s with some real psychedelic flavor. If Del and Domino were looking for genuine people, that’s where they would find them.

All festivals go through struggle at some point during their existence. Even the most successful ones. Every raver in the southwest knows the story of why EDC isn’t in LA anymore, and every other mega fest including Coachella, Lollapalooza, and all the other massives coming up on their 15th or 20th anniversary have had to shut down for at least a year due unforeseen, and sometimes dire circumstances. What makes these fests so lucrative though is that they were able to come back from the void even stronger, and that was during a time where festival curators didn’t have the reliability of their business consuming the mainstream. I’m sure at first they were all trying to attract the same genuine crowd that Domino mentioned, but at a certain point, organizers need to focus on putting on a great festival first. No one can predict whether Serenity will come back next year or not at this point, but the festival market has at least another two years in the mainstream. Let’s see if they can use that to their advantage.