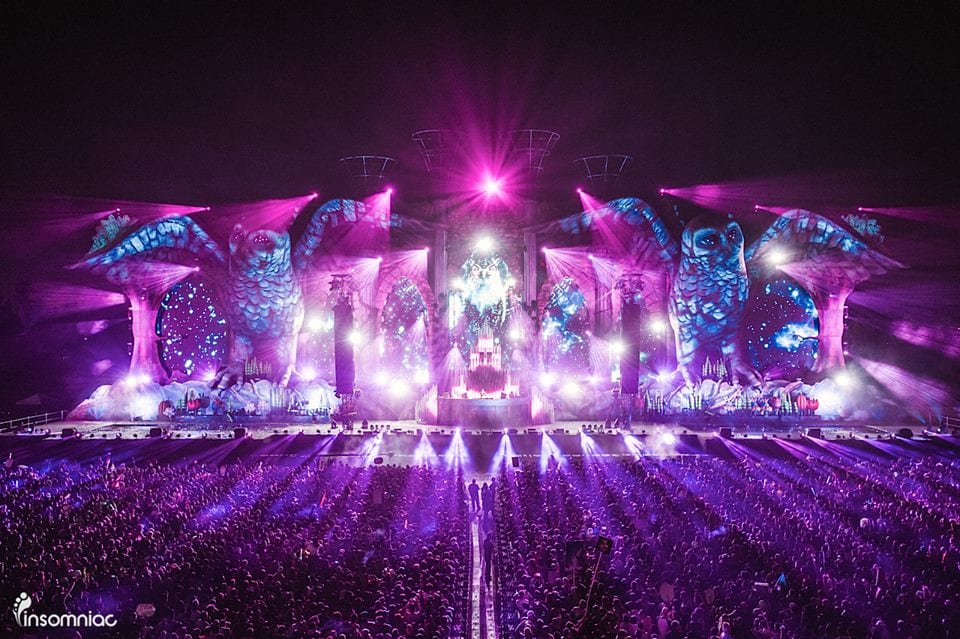 How could one possibly beat creating the largest stage ever assembled in North America?

Easy – make it portable, of course!

Last summer, at EDC Las Vegas 2014, Insomniac creators made history with the unveiling of the kineticCATHEDRAL, North America’s biggest stage to date. The revamped stage stands at 240 feet wide and 90 feet tall, making it twice as big as the previous record holder.  The stage also includes thousands of light fixtures, 28 LED displays, 30 lasers, water displays, in addition to being flanked by two 45-foot tall owls. Getting it’s name from obvious religious undertones, the stage

The kineticCATHEDRAL reveal last June was, without a doubt, a game-changing moment for the EDM scene. But Insomniac, always pushing creative boundaries and aiming to achieve seemingly impossible firsts, announced earlier this year that the kineticCATHEDRAL was now portable and would be making appearances across the world throughout the 2015 festival season. The massive stage already traveled to EDC Mexico earlier in 2015, and will be popping up at EDCNY Memorial Day Weekend. In addition to making its second appearance at EDC New York, the stage will travel across the Atlantic Ocean this July to EDC UK, which marks the third year that the festival returns to Great Britain.

So what does this mean for the EDM scene? Well, first, it points out something that most of us already realized – the boundaries are limitless for Pasquale and his team at Insomniac. Creating a portable stage, much less the largest assembled stage in North America, is no easy task, especially when it involves the technological and visual staples of EDC. Even just a couple of years ago, no one would have thought something like this would be possible. In fact, no one would have thought the EDM scene was big enough to even entertain an idea like this. But Insomniac always seems to be one step ahead of the game, helping ravers see their wildest dreams come true. For those on the east coast, or across the ocean in the UK, who aren’t able to attend EDC Las Vegas, this is an opportunity for them to see the kineticCATHEDRAL in the flesh, and experience its sheer magnitude and power.

This also means that people will make it a point to attend festivals they may not have considered before, simply because of the high level of production now involved. With EDC NY returning for its fourth year, some people were dismissive, saying that it doesn’t compare to EDC Las Vegas or even EDC Orlando. Insomniac took in the (hopefully constructive) criticism, and did their best to make the smaller EDC’s just as magnificent as EDC Las Vegas. Going to EDC is not just about the music – it’s really about the environment that’s created, and the inspiring world at your fingertips. People from all walks of life will now travel to see the kineticCATHEDRAL, whether it’s from a music, architecture, technology, or production standpoint. From a business standpoint, Insomniac beyond quadruples the amount of exposure they’re getting, and make an even bigger name for themselves throughout not just North America, but the world. The ability of today’s EDM scene to continue to adapt to its fans makes it unlike any other.

For all of the headliners who will enter the gates of EDC UK this July, this is especially exciting, as the stage crosses the Atlantic for the first time. With an already extraordinary lineup, featuring the likes of Art Department, Carnage, Tiesto, Hardwell, and Paul van Dyk, just to name a few, it will surely be the best EDC UK yet. And, with much easier and cheaper travel options available in Europe, this festival’s stock just rose exponentially.

Now that the kineticCATHEDRAL can reach just about anywhere in the world, could we really see an EDC Antarctica in the near future?

Mostly kidding on that one, but seriously.. what can Insomniac come up with next? We can’t wait to see the new main stage at this year’s EDC Las Vegas while the kineticCATHEDRAL continues to share it’s magic with the rest of the world.