The Dutch can add one more venue to their list of indoor event locations. The new ‘Radical dome’ offers space to a maximum of 14000 attendees!

The venue is part of the recently build recreation area called Breepark which owes it’s name to Breda, the city it’s situated in. Breda is a city on the Dutch-Belgian border and is, among other things, famous for its delegation of world class Dj’s like Tiesto, Hardwell, R3hab and Dannic.

The recreation area includes a wide variety of facilities like multiple stores, restaurants and even a bowling lane. The area is easily accesible by car and it has great amounts of parking space. It has it’s own bus stop and during big events a shuttle bus transport service is hosted in between the venue and Breda central station for people coming by public transport. For those who are looking to spend the night in the city Breda also offers numerous hotels and hostels.

The inauguration of the Breepark Dome was hosted by Dutch raw hardstyle artist ‘Radical Redemption’. Radical sold out his own shows in the famous Heineken Music Hall (5500 capacity) two years in a row. ‘The One Man Army’ in 2015 and ‘Militant Mayhem’ in 2016 had proven to be  very popular and so Radical and his team started looking for a bigger venue for ‘The Road To Redemption’.

Radical’s hosting in the Breepark would be the ultimate test for the venue’s foundation. The event sold out and over 12000 hard dance enthusiasts tested the limits of the dome. We spoke to some of the crowd to find out if they had encountered any trouble with the new venue. Only 2 notable issues came to light. The first was terrible network connection (probably a lack of indoor antennas) and the second were some issues with crowd management (no organised flow in the crowd to and from the dancefloor). We expect these 2 issues to be resolved before next event. 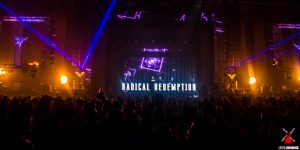 The upsides to the venue were the fact that there was very little to no waiting time in line for the entrance, the acoustics were great and the facilities were well kept. The night was complete when we found out that the McDonald’s next door was opened in the morning (and they even played hardstyle in the restaurant!).

Over all we’re very pleased with the new location. We’re sure that the venue will be improved when more events will be hosted here. The next event in the Breepark Dome is Tiesto presents Clublife on Friday December 22nd.