The Rising Trend of Curated Events

You have heard the term “curated event” bounce around in the music world before. If you have been paying attention to the scene recently, you have probably noticed that the phrase popping up more frequently now. But what is a “curated event”? Who are the people hosting them? What makes them different from a regular concert or a festival? And what could this rising trend mean for the future of live shows? We are here to answer all of those questions and discuss the rising trend in curated events. 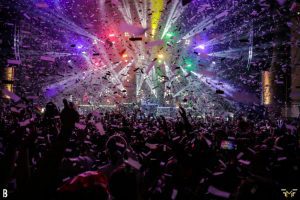 If you are a regular concert-goer or have attended a curated event before, you may know these shows to be a pinnacle of performance. The headliner always puts on a show that could be considered one of their best performances. Not to mention these shows have a stacked lineup of openers; acts that would typically not be in the undercard of an event. With such high-energy performances from all of the artists, everyone seems to dance their hearts out for an unforgettable night.

A curated event is typically a one to three-day event that is put on by a musician or group. These events are usually held in large theaters or arenas and have high-level production for the headliner/ host of the event. You may be asking yourself, “how are these different from other concerts?”. The element that makes these events so special is that the headliner is the one who is curating the entire thing. They get to handpick the location, date(s), set times/ lengths, and all of the artists who are playing. The entire vibe and feel of the music experience are controlled by the person putting it on instead of the venue or promoter, who is usually setting the performance parameters. A BRIEF HISTORY OF CURATED EVENTS

Before curated events were made into existence, the electronic scene was still operating mainly in the underground. While the popularity of the music and events was becoming more established in the US, EDM concerts were happening at small clubs, warehouses, and a handful of theaters. But curated events were some of the first electronic shows to be hosted in arenas. This brought a new wave of possibility, creativity, production, and performance to the electronic music industry in the United States.

While the popularity of concerts in this style is on the rise, this trend is not something new. Curated events were made popular, or at least capitalized on, by Bassnectar over the last decade. In 2012, this type of performance became a staple of Bassnectar’s when he and Pretty Lights hosted “BassLights” at the Hampton Coliseum. Since then, many other artists have begun hosting and playing concerts in a similar style.

Artists have been putting on these extravagant shows for some time now, over the last couple of years these performances have really picked up traction. GRiZ has hosted curated events like “GRiZmas” over the years and later this year he will host his biggest yet, “Space Camp”. 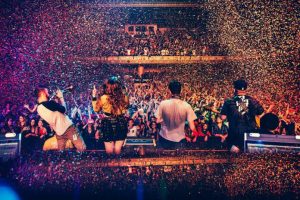 WHAT THE RISING TREND COULD MEAN

This rising trend could mean a few things for the electronic music world. The first thing is that we will see more artists begin to announce their own curated events. That means more show dates and a higher possibility that the next one to happen could be close to YOU!

As far as performances go, this could usher in a new era of performance and production. An era where artists are putting on some of the most intricate, high-level concerts to date with lineups that seem too good to be true. The possibilities are untold, who knows what could come next? That is an element of the excitement around curated events. As you look for shows and other events to go to, keep your eyes and ears out for curated events. The next one to be announced might be your favorite artist playing at a venue near you!

Above & Beyond Are Coming To The Avant Gardner In NYC