Tomorrowland has made history once again.

The festival announced today that Tomorrowland 2017 broke all sorts of social media records and it was confirmed as the biggest social media music event in the world. We were lucky enough to experience the magic in person this year, and can easily see why the festival made history.

According to an official Tomorrowland press release, the festival saw over 200 nationalities united in Belgium this past July. More incredibly, the festival reached over 200 million unique people on social media over two magical weekends and established 1.2 billion points of contact.

Facebook and Instagram are the two biggest traffic drivers for Tomorrowland. Throughout the festival Tomorrowland went live to deliver full sets, created exclusive Instagram Stories with festival highlights, and took over the official Instagram account (@instagram). “Working with the DJs, and capturing the enjoyment of the visitors, Tomorrowland created authentic and engaging content for Facebook Live and Instagram Stories, to bring the millions of music fans from around the world even closer to the festival,” says Glenn Miller, Entertainment Partnerships for Facebook in EMEA.

The Tomorrowland festival was made available on Snapchat under “Our Story” and more than 77 million Snaps were watched by over 4.3 million Snapchatters.

Besides the content on its own channels, the festival was broadcast live on radio in the USA, India, China, Belgium, France, Germany, Austria, Dubai, the Netherlands, Romania, Ireland, Italy, and Spain and on television in Belgium, Italy and MTV’s global network. Tomorrowland joined forces with Budweiser for the live stream experience.

Tomorrowland 2017 proved to be an event for the ages. With an incredible audience both at the festival and on social media, the festival touched millions upon millions and became the biggest social media music event in the world.

See below for all of the astronomical numbers from Tomorrowland 2017 and get ready for the official after movie, which will be released during the first half of September.

The festival has not announced the exact dates for the 2018 edition, but it will be two weekends in July. Stay tuned for more Tomorrowland 2018 information as it’s released. 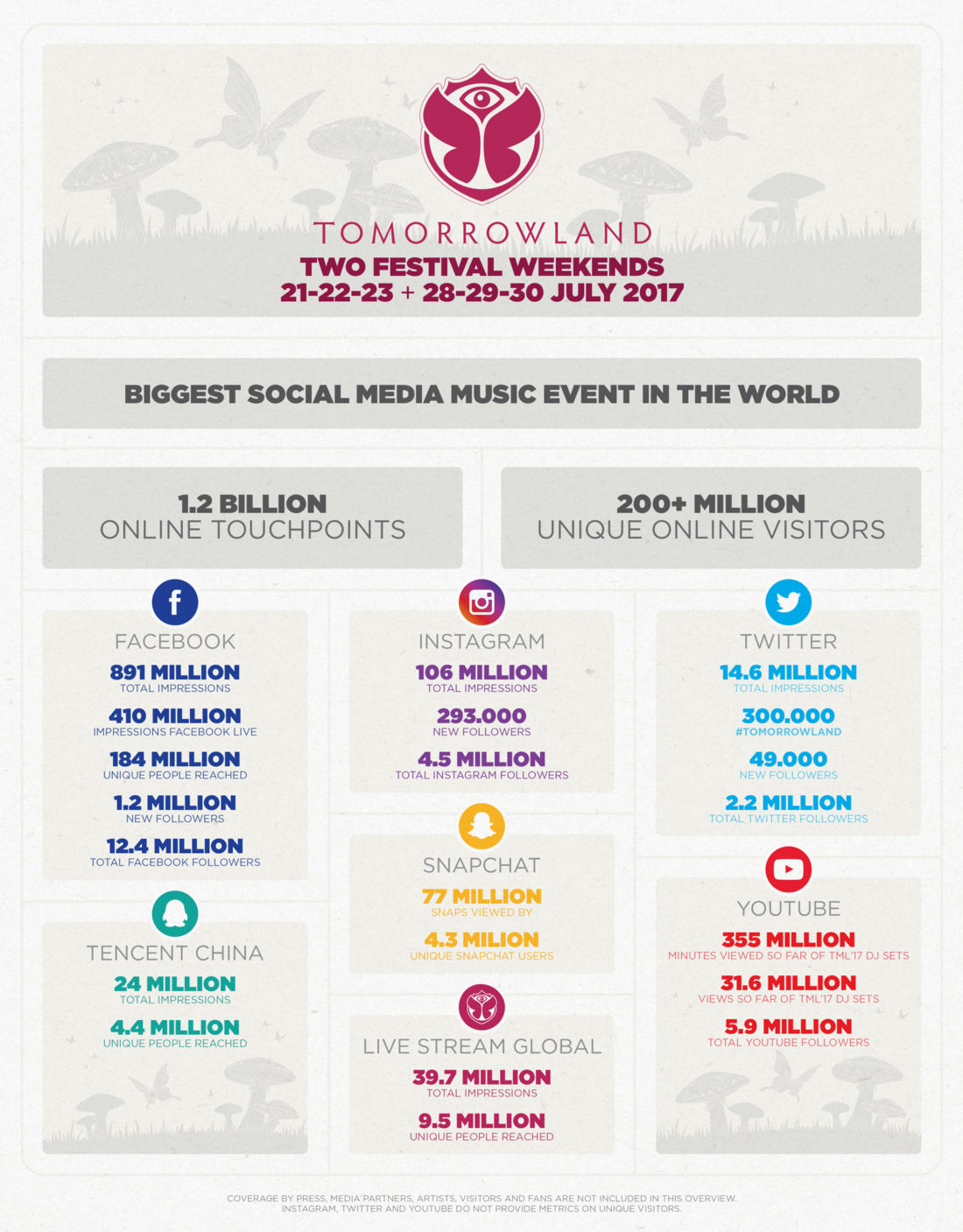