After the major success and first ever ” Road to ULTRA Australia’ in Melbourne, ULTRA Worldwide has finally announced their major expansion to two incredible cities across the Australian continent. ULTRA Worldwide will take place on February 23rd and 24th. Now, the festival has just released an amazing Phase One Line-Up to blow away the Aussie fans. 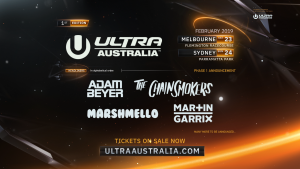 ULTRA Australia is proud to announce the addition of new stages, along with its legendary main stage. Headlining the main stage who will all be making their ULTRa Australia debut is:

Adam Beyer and the Don of Drumcode will be dominated the RESISTANCE debut. Check out the full Phase One Lineup below.

Dance Your Way Into 2019 At Decadence Arizona