For those of us that won’t be attending the Ultra Music Festival festivities in Miami this weekend, UMF has made every effort to further enhance the “at home” experience for fans. With a new 2016 broadcast strategy employed, those watching from home are in for exclusive interviews, performances and crowd interaction. 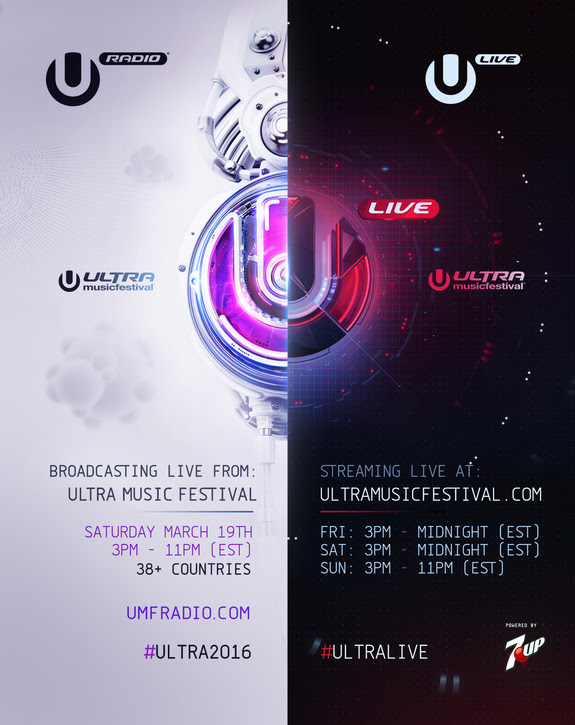 UMF TV, produced by NOMOBO and powered by 7-UP, has a new addition to the Ultra experience with ULTRA LIVE. With live broadcast from a custom built studio on the festival grounds, hosts Andrea Feczko and Andie Helfrich will be available From 3PM to Midnight throughout the weekend. Live DJ sets are already confirmed to include Afrojack, Armin van Buuren, Avicii, Aly & Fila, Andrew Rayel, Carnage, Cedraic Gervais, The Chainsmokers, Dash Berlin, Fedde Le Grand, Galantis, Hardwell, Kaskade, KSHMR, Laidback Luke, Markus Schulz, Martin Garrix, W&W and so many more. But the real treat is set for Saturday and Sunday with “a pair of VERY special guests” set to join Andrea and Andie as they co-host the live stream! Check out the trailer below:

In addition, UMF RADIO is set to premiere this year as the world’s largest broadcast of EDM content to date, transmitting live for 8 hours across 50 networks, in 38 countries, as well as via the festival’s updated official app, available here. Produced by The Radio Department, this exclusive broadcast is bound to make history with a lineup of artists confirmed to participate in the live radio event like Carl Cox, Dash Berlin, DJ Snake, Hot Since 82, Jamie Jones, John Digweed, Martin Garrix, Richie Hawtin, Steve Angello, Tiësto, Tycho, W&W, Yellow Claw and many more.

ULTRA LIVE and UMF RADIO can be accessed at here, at Twitch TV or by downloading the official app available for iOS and Android here.

7 Ways To Mentally Prepare Yourself For A Festival