Ultra Music Festival 2018 in Miami is officially on sale now at www.ultramusicfestival.com. There is a two limit per order and you must be 18+ years old to attend and be 21+ for VIP passes.

Ultra Music Festival has also earned the title of “World’s #1 Festival” on DJ Mag’s Top Festival’s poll for a second year in year in a row. After drawing in over 150,000 people last year and featuring some of the best acts and performances, the 20th anniversary is not one to miss. Watch the Official Ultra Miami Memories 2017 below. 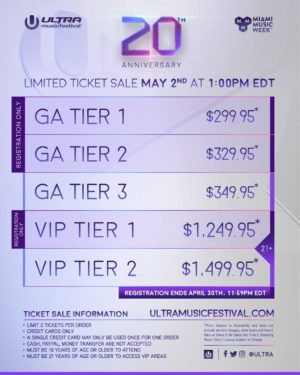 Ulta Music Festival will return to Miami for its 20th anniversary on March 23, 24, and 25 2018. For more information and tickets, click HERE.

Source: Get In PR