Virtual Self Takes Over Nos Events Center in San Bernardino

Porter Robinson’s trance-like alter ego Virtual Self announced a North American tour and will be dropping by in SoCal for an unforgettable evening at the notorious Nos Events Center in San Bernardino.

Not only is he bringing his new sound to blow everyone away, he’ll be bringing his perfectly constructed visuals named “Utopia System” and is ready to send you into another dimension.As Virtual Self and Porter Robinson are the same person, don’t expect to hear any songs from Porter. He is determined to keep these projects as separate and distinct as possible, and he will do just that.

His vibes are surely to bring you way back to the very first days of EDM and make you remember what raving is all about. Virtual Self will bring two sides to him. One is the Pathselector which is filled with techno and trance styles while the Angel side will bring a more hardcore jungly sound to the table.

Get tickets here and check out the full tour below. 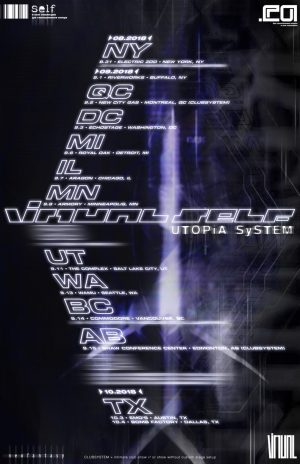