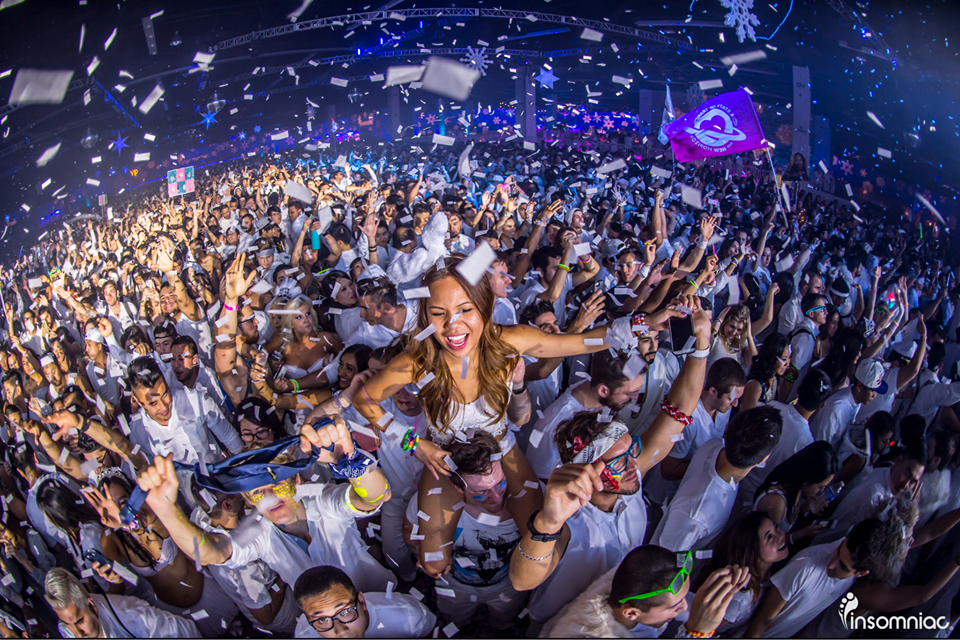 The Return of Insomniac’s White Wonderland: Still Room to Grow

New Year’s Eve is a day where most people reflect on the past year, from the good to the bad and everything in between.  This past year Insomniac took on the festival circuit once again as being one of the most innovative production companies out there. Their unique twists on their Wonderland, NRG, and Electric Daisy Carnival brands were some of our favorite highlights.

For New Year’s Eve, Insomniac returned with their exlusive event known as White Wonderland. Ever since its debut back in 2011, this event has brought dance music enthusiasts together for one of the biggest New Year’s Eve celebrations in Southern California, while comprising a combination of all-white attire, dazzling sights, and sounds to make White Wonderland a truly unique experience. White Wonderland returned to the Anaheim Convention Center with a potency that has been witnessed year after year for the lucky few that have been able to take part. Due to a strict 21+ age requirement, the crowd that embraces the night is often a quite older, more condensed gathering as opposed to the sometimes seemingly inadequate recklessness from a 21 and under crowd. An all white dress code is mandatory for the night however, you were able to find a few specs of other colors within the crowd as a few attendees aimed to stand out.

The Anaheim Convention Center inside was adorned with a variety of mediocre-decorated bars, food vendors, merchandise stands, and a water refill station next to a first aid center. A “Winter Wonderland” themed stage was present once again and housed some of the biggest world-class DJs alongside an assortment of dancers and aerialists which levitated above the crowd. Showers of confetti, indoor pyrotechnics, lasers, and champagne mesmerized the crowd from beginning to end throughout the night. However, if you were in the back it was difficult to see what the stage looked like. A lot of the details went unnoticed. Lastly, often times it felt like the performers were restricted to the front of the crowd. We would like to see the performers more in the middle of the crowd and maybe some even in the back since the front often gets very crowded. The back often gets neglected and that’s where most of the people are. We would like to see Insomniac try to make it more of a 360 degree experience.

Starting the night was the musical pair known as Sunnery James and Ryan Marciano. A fusion of tribal, electro, and house beats made for a spectacle to witness as they started off the night with a mix that had the crowd moving right from the start. W&W followed after with their vision of electro and progressive house mixes. I wasn’t not too far off from what we had witnessed a few months prior as their main bangers such as “Lift Off” and “Thunder” were the crowd highlights during their set. They did play a couple of hardstyle tracks that caught our attention and got everyone going crazy. Shortly after, the musical innovator Laidback Luke took the stage for a set full of assorted melodies such as “Go” and his classic anthems including “Dirty Talk [Laidback Luke remix]” and of course the smash hit “Leave The World Behind.”

Showtek had the undisputed honor of doing the countdown for 2015 for Insomniac with thousands of revelers at their grasph. Sadly, this time around the duo seemed to have fallen short of energy that the crowd deserved leading up and after the countdown. Luckily, the production made up for it, most of the audience was simply unimpressed. It’s critical for the Countdown to be epic, and we hope next year there’s a little more emphasis on the energy and excitement from the artists on stage. Overall, we witnessed the same set structure that Showtek has recapitulated through the year with very minimal modifications that we would have liked to have witnessed especially during this momentous. Closing off White Wonderland was the one and only Armin Van Buuren. Due to unforeseen circumstances, Armin seemed to have started his set about 15 minutes later than scheduled which caused him to have to cut a bit of content out of his set. We must note: aside from the similarities that we noticed during his set, Armin found a way to conduct the crowd with quite the variety of mashups and energy that only someone like he can deliver.

White Wonderland has been a tradition for the EDM Maniac team since the first one back in 2011. Without a doubt, Insomniac has managed to captivate us with their unique vision year after year for this event. Being in a 21+ setting really brings in a different vibe for Insomniac, along with an all white dress code which is a detour from their “come as you are mantra.” This is what makes us keep coming back. However, we would like to see Insomniac take it to the next level. They are masters at what they do, but we will always want and expect more. This may not be one of the biggest events for Insomniac, but it is a night that is special to many. We hope Insomniac continues to use this occasion to really think outside of the box and deliver something more extraordinary when it comes to producing this one-of-a-kind experience on this special night. This might mean switching the venue, who knows. Either way, we know they will continue to shine if more improvements are made\.

With that being said, we thank the team at Insomniac and staff, artists, and especially you the audience for that night. If it wasn’t for you, this event would not have been as special as it always is. We look forward to what’s to come this year and we hope everyone has a phenomenal 2015!